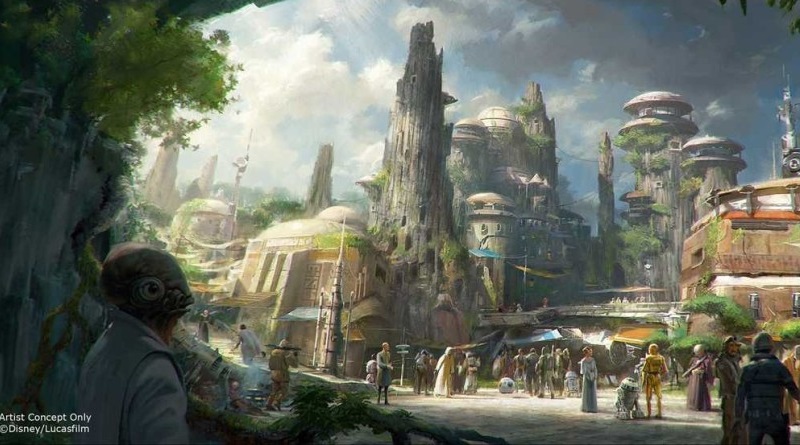 Over the weekend the D23’s Destination D event was held at Disney’s Contemporary Resort at Walt Disney World in Florida. At the event Disney Parks chairman Bob Chapek revealed more details on the Star Wars themed lands currently under construction in Disneyland and Walt Disney World in the US and planned for Walt Disney Studios in Europe. But what is Star Wars: Galaxy’s Edge exactly? What attractions are to be expected? And most importantly when can we go there?

What is Star Wars: Galaxy’s Edge?

At the D23 Expo 2015, Disney’s very own convention, The Walt Disney Company Chairman and CEO Bob Iger announced Star Wars: Galaxy’s Edge. A Star Wars themed land to be built at Disneyland in California and Disney’s Hollywood Studios in Walt Disney World in Florida for a 2019 opening. As with everything Disney these days the plans were and still are ambitious. Galaxy’s Edge would be the biggest ever expansion to Disney theme parks, being 14 acres in size.

The latest trend for theme parks is to not build one attraction, but to build themed “lands.” These are themed sections of a park with a cohesive narrative, themed shops and restaurants, one or two smaller attractions, and a big attraction. Examples of these you can already visit are Pandora – The World of Avatar at Walt Disney World’s Animal Kingdom, The Wizarding World of Harry Potter at Universal Orlando Resort, and Klugheim in Phantasialand, to name just a few.

What to expect from Star Wars: Galaxy’s Edge?

First of all Star Wars: Galaxy’s Edge’s goal will be to fully immerse you into the Star Wars universe. When you enter the themed land you will be transported from our planet to the Star Wars planet Batuu, a frontier outpost on the edge of known space and the Unknown Regions. You will meet Star Wars characters, be able to visit typical Star Wars locals like a cantina, and probably much, much more. And with background music composed by John Williams. The architecture of the land is inspired by the architecture found in the Turkish city of Istanbul and in Morocco. Next to that, the Imagineering team took inspiration from the concept art of the original Star Wars movies by Ralph McQuarrie.

In Disneyland in California Galaxy’s Edge will be located in the northwest part of the park, north of Frontierland and west from Mickey’s Toon Town. It replaces Big Thunder Ranch and a number of backstage areas. Its construction also caused a reconfigured route for the Disneyland Railroad and Rivers of America.

At Disney’s Hollywood Studios in Walt Disney World in Florida, Galaxy’s Edge is being built in the south of the park. The construction of the themed land replaces the Lights, Motors, Action! Extreme Stunt Show and the Honey, I Shrunk the Kids: Movie Set Adventure in the Streets of America area.

The first attraction of Star Wars: Galaxy’s Edge we like to talk about is Millennium Falcon: Smugglers Run. A full-scale Millennium Falcon has been build for this simulator attraction. Guests will take on one of three positions in the cockpit of the iconic spacecraft, giving you a different experience each time. We imagine that you can be a pilot, co-pilot, or navigator. The story of the attraction is that Star Wars: The Clone Wars and Rebels pirate character Hondu Ohnaka and Chewbacca have “borrowed” the Falcon for your adventure. Your achievements while piloting the Falcon will trigger interactions throughout Galaxy’s Edge when you leave the attraction. For this to work you will need to have a smartphone with the Play Disney Parks app which you have to allow to track you.

Rise of the Resistance

While Smugglers Run sounds like a fantastic attraction on itself, Rise of the Resistance might be able to top it. It will be a motion-base dark ride which places the guests on board of a First Order Star Destroyer under attack by a Resistance fleet. This kind of hostility probably means the story of the ride is set after the movie The Last Jedi. “What does ‘motion-base dark ride’ mean?”, you might be thinking. It means that you and a number of others will take place in a motion simulator carriage that then moves through the dark ride. The carriage has the ability to not only move in all directions but is also able to rock in all directions. Dark rides with motion-base carriages, like Universal’s Islands of Adventure’s The Amazing Adventures of Spider-Man, are also able to simulate the feeling of dropping a long way down. The use of such a track, therefore, opens up a lot of possibilities. Disney Parks chairman Bob Chapek called the dark ride “the most immersive ride we’ve ever built.”

While Star Wars: Galaxy’s Edge might be Disney’s most ambitious themed land containing their most ambitious attractions, the plans for the Star Wars hotel at Walt Disney World in Florida might be the most ambitious idea of them all. Called “Project H” the Star Wars hotel will be a role-playing hotel. This means there will be total immersion for the guest into the Star Wars universe. The hotel will have 34 “cabins” for guests to stay in, a restaurant, and a lobby. Why call the rooms “cabins?” That’s where the ambitious part comes in. The hotel is actually a spacecraft in planetary orbit. Yes, you will board a shuttle and “fly” to the hotel in “space.” When you reach the hotel the shuttle will dock and you will, from that point on, get the illusion of being in space. This also means that you will not be seeing Walt Disney World’s Florida landscape out of your hotel room, but the planet of Baatu from orbit. How they exactly will pull this off and how much spending a night there will cost you (better start saving up) are unknown at this point. 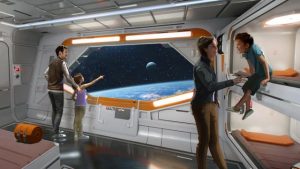 Currently, all we know about Star Wars: Galaxy’s Edge is that it is part of the whopping two billion Euros (that’s roughly 2.5 billion Dollars) investment into the expansion of Disneyland Paris’s Walt Disney Studios park, to be completed by 2025. And, boy, does it need it! The park currently is considered a “half day” park by some, with about a dozen rides. The expansion project will almost double the park in size, remaking one area currently housing the Rock ‘n’ Roller Coaster, Lights, Motors, Action! Extreme Stunt Show and the Armageddon special effects experience into a Marvel-themed area. A huge artificial lake with entertainment options will be created to be the new centre of the park, with beyond it a Frozen themed land and the European version of Star Wars: Galaxy’s Edge. Currently, that’s all we know. Concept art gives us an idea of how the renewed park will look, and it looks like the Star Wars area is a version of Galaxy’s Edge, but nothing is for certain. The concept art, for example, shows an X-Wing instead of the Millennium Falcon. Does that mean there will be an X-Wing based attraction instead of a Millennium Falcon one? We will have to wait for more information. 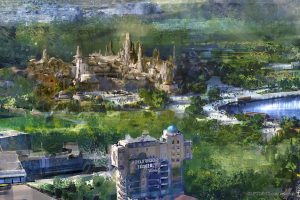 There is a lot to get excited about when it concerns Star Wars: Galaxy’s Edge in the Disney theme parks in the US and Europe. Let’s hope our expectations will be met. 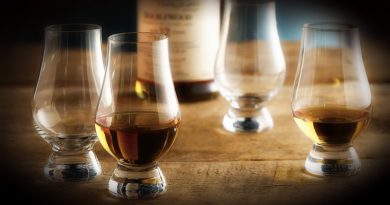 A Geek’s Guide To Whisky Tasting