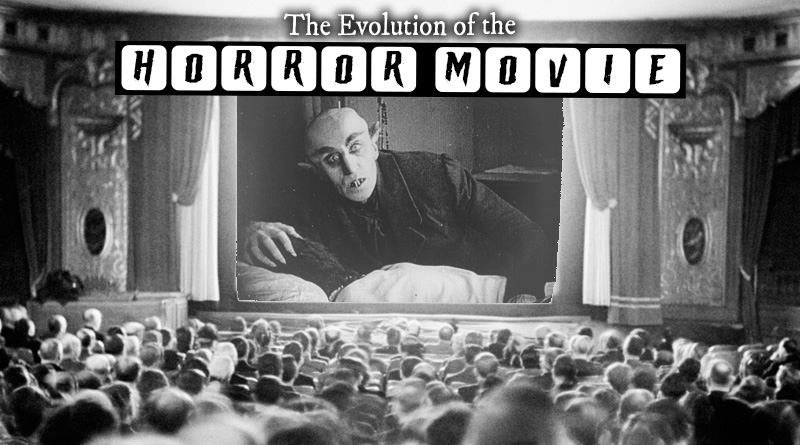 For horror fans, a cinematic centenary is just around the corner (2022 in-fact) and to celebrate this monumental moment of the monstrous Rob Mclaughlin takes a close look at the key points of the evolution of the horror movie.

Vampires, Werewolves and Demons (Oh My!)

When was the last time you were really scared during a movie? What made you jump, squirm or put your hands over your eyes? Horror is, of course, subjective, however, there is a little more to creating a scare than just the ‘boo’ moment a film has to resonate with its audience and to tap into their primal fears – it might be that Japanese girl crawling out of the television triggers the shivers down your spine or the unexpected appearance of Bruce the Shark that quickens your heartbeat but whatever the ‘thing’ that makes you go weak at the knees a lot the notions of horror come from context and the environment they are set.

When looking at the genre of the horror films intent to create these scares then there is nearly a centuries worth of celluloid to look at with horror as a staple view theme still very much at the forefront of cinema with the like of ‘The Green Knight, ‘Hereditary’ and ‘Midsommar’ allowing new directors such as Robert Eggers and Jordan Peele to reinterpret horror to appeal to new audiences.

Horror can be traced way back to the beginnings of film with the first wave of Vampires, Werewolves and Demons first frightening audiences cinema right back at the very dawn of cinema when F. W. Murnau directed Max Schreck in the classic black and white silent movie Nosferatu (1922). While Count Orlok was the first ‘Unofficial’ version of the prince of darkness to be shown on screen he was also the notably first on-screen characters to cause issues of copyright with the new medium of film due to the counts uncanny resemblance to the written description of Dracula in Bram Stoker’s novel. This issue was very quickly highlighted by Dracula’s original book publishers and Stoker’s estate who sued the makers of the film, winning (in Germany where the film was made the novel still required copyright approval and would not be considered public domain until fifty years after Bram Stoker’s death in 1912) with all the copies of the film ‘supposedly’ burnt apart from the few ones which made it to the US where copyright laws differed.

While Orlok successfully made the trip across the Atlantic to be seen on cinema screens in the states it wasn’t until the original ‘shared cinematic universe’ of Universal monsters that included wolfmen, vampires, mummies and creatures from the black lagoon emerged in Hollywood in the 1930s, along with the first ‘official’ appearance of Dracula, did horror fans get to see a wide variety of literary monsters make the transition to celluloid.

Universal, along with the studio’s line-up of leading men which included Bela Lugosi, Boris Karloff and Lon Chaney Jr became responsible for the initial ‘run’ of horror films in America with Frankenstein (1931), The Invisible Man (1933) and Bride of Frankenstein (1935) all hitting the screens in the 1930s. This collection of all-time great classic monster films (and the original ‘Dark Universe’ of course) are rightly considered among the top-tier pieces of classic Hollywood movies of all time and which only framed horror films as a legitimate medium to make movies from but also established ‘Hollywood Monsters’ as cultural icons.

The irony that these films are all based on or derivatives of ‘classic’ European horror literature and were able to be seen on the screen for the first time due the innovation, space and sets American Film companies had after their move west from New York during the 1920s. The Universal monsters scripts had to be based on ‘established’ stories and environments associated with horror creepy castles, mad scientists labs, dungeons etc due to the lack of American ‘mythology’ (the US was still a relatively ‘new’ country in the 1930s) so the only way Universal could instil horror in its audience was to indeed traditional folklore motifs and fairy tale settings of dungeons, castles and far-way lands (to an American audience) with scripts either directly lifted from literature or using direct influences from a shared public domain of myths, lore and storytelling of other countries to instil and present the films ‘horrific elements. The universal (no pun intended) inherent fear of the dead the interjection of aggressive external forces into a community or the loss of a family are all ‘traditional’ storytelling tropes and motifs and the basis of Joseph Campbells ‘Heroes Journey’ which suggests s a theory that all plays, stories, scripts and screenplays are based on ‘hereditary’ storytelling and mono-mythic –that all stories are essentially the same and have the same structure, beats and underlying themes.

There is an argument that this German silent horror film is the ‘original horror movie’ whether it intended to be or not. Directed by Robert Wiene and written by Hans Janowitz and Carl Mayer. Caligari is a dark, twisted and bizarre movie – purposely radical and deliberate in its attempt to distortions in perspective, form, dimension and scale create a chaotic and unhinged appearance

1931 saw the first Universal monster appearance on screen of Dracula. Directed by Tod Browning (Freaks- see below) and starring Bela Lugosi as the titular bloodthirsty count this was the first ‘official’ adaptation of Bram Stokers classic novel.

Freaks has the notoriety is one of the first films ever to be banned. When released in 1932 to a pre-code (of horror) and became one of the most talked and controversial films of all time Taking on the dauntless task of direction was Tod Browning who garnered the majority of the controversy for the film due to his use real ‘side-show’ individuals.

Probably the most iconic presentation of Mary Shelly’s iconic creatures (which also recently celebrated its centennial) James Whale cinematic adaptation of the ‘Modern Prometheus’ is the style, imagery and design of the monster that has become the most recognisable – being used in everything from The Monster Squad (1987) to the Hotel Transylvania series (via The Groovy Goolies, Drak Pack, Scream Street and more).

Whales second outing into the world of ‘man-made men’ this time bought the screen the iconic Bride – the style icon for goths and those who themselves are ‘strange and unusual. It is an unwritten rule that the sequel of any film will never be as good as the original however the superior Bride has more pace, design and character than the initial movie.

London after Midnight aka the Hypnotist (1927)

An American silent movie starring Lon Chaney –became one of the first cinematic legendary ‘lost’ films as the only remaining reel of the film was destroyed by a fire in the MGM vault back in 1967.

Join us again tomorrow for a look at the 1950s, an era in which fear of science and nuclear power heavily influenced the direction horror would take.