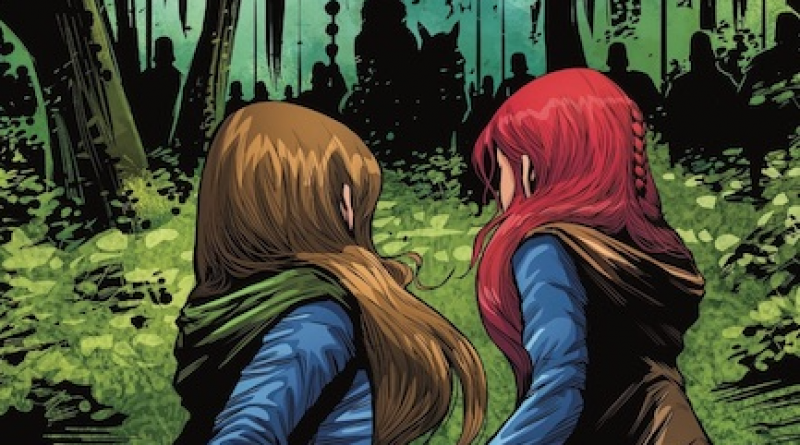 Have a great idea for a comic book? Want to turn that dream into a reality but don’t know where to begin? Never fear fellow geeks, guest writer Honor Vincent is here to answer your questions.

I’ve funded the production of Andraste, the first comic I’ve written, myself. I thought it would be neat to share exactly how much it cost to do that for Issue #1 as an independent writer.

I’m breaking this series into three parts because I tend to go on and on and don’t want your eyes glazing over. The post covers the costs of ‘getting started.’ That includes learning how to write a comic script, doing research, screwing up, and protecting myself legally. Like a business lady! It’s probably the least applicable to other projects, but is a useful baseline, and good way to communicate how much I like contracts and spreadsheets (a lot! a lot.).

Here’s the total for producing Issue 1, not including promotion, which hasn’t happened yet:

TL;DR: For me, it cost quite a bit, and it took a long time to save up for it! 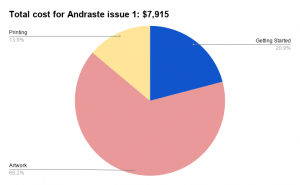 An overall goal for the series is that it eventually pays for itself. That doesn’t mean it returns everything I’ve put in (that’d be nice!), but that sales from released issues start covering the production of future issues once I have a few out. No small thing, as you can see from my terrifying pie chart.

When I was starting to budget for the book, I wanted to know how much everything would cost. I found some wonderful resources online, like Jim Zub’s many wonderful articles about comic economics and team-building, and the surveys and publisher page rates from Creator Resource, but I couldn’t quite figure out what a reasonable page rate was for my project in particular. Zub addresses this very diplomatically in one of his posts:

“The reason I didn’t list rates in my post is because there’s a massive possible range. Seriously, there are times when it feels like anything goes in this business. Whatever you and an artist can agree to is the rate that works for your project.”

True! But even with this wealth of information, I still wanted to know what projects like mine have actually cost folks before in total, and that’s what I couldn’t find. So I’m writin’ it.

I produced the first issue of the book with my savings and without a loan, financial assistance from anyone else, or a Kickstarter/Indiegogo/Patreon. I also had work for hire arrangements with the current team of artists, and haven’t done an ownership split (yet).

When talking about the financial burden of making art, I think it’s vital to be upfront about one’s situation going in. For example, grinding away at any creative endeavor is very different if you’re managing a household, raising three kids, and working than it is if you are independently wealthy and have someone to do your laundry/dishes/cooking/nose-wiping. So!

When I had the idea for the book and had sketched out the main beats of the story, I reached out to a friend to do the artwork. I didn’t know what to expect to pay people when I started, and it was their first long-term comic book project, so we agreed on $1,000 for the first 10 pages and a cover, in inks with full color (so about $90 per page). They’d also have 50/50 ownership of the book. I paid them $500 as a first installment on the first 10 pages.

We made a contract, because I very much believe in those and you should, too. It included a ‘due date’ for the 10 pages, after which if the pages weren’t done the contract would be null. Unfortunately the partnership didn’t work out, and we decided to stop working together on the book. Since it was well after the ‘due date,’ it was easy to cancel the partnership, and I kept ownership of the project. I didn’t ask for any of the $500 back; even though I didn’t use any of it, they still did work on the project.

While I’ve been reading comics for about as long as I can read, I also know that doesn’t necessarily translate to writing comics I’d want to read right out of the gate. I took a one-day comic and graphic novel writing class ($175) with Tom Brennan in 2017. It was great! We did a bunch of writing exercises I found especially helpful, and I’ve gone back to them since.

I also went to New York Comic Con in 2018 and 2019 ($111). I’ve gone in the past, but these are the years I can say this was a ‘work trip’ 😉 In 2018 I went to a great panel about the legal ins and outs of being a comic-person, where Thomas Crowell Esq., who wrote “The Pocket Lawyer for Comic Creators,” spoke. In 2019 I met some folks who told me that in their experience historical comics are a tough sell in America, so, that was heartening.

I also read books about writing comics, and found a lot of free resources online. I received Alan Moore’s Writing for Comics and Ivan Brunetti’s Cartooning: Philosophy and Practice as gifts from my coworkers. I also found the Script Archive at comicsexperience.com super valuable for learning formatting.

Since this is a historical book, I’ve done a lot of research. This has helped me bore people at parties, find out about interesting tidbits to include in the comic, and make sure I’m being at least somewhat historically accurate. I was able to do a lot of research online, and also received gifts of books from friends. Some of my favorite books were A history of Rome by Moses Hadas, The Druids by Peter Berresford Ellis, How do we look and SPQR by Mary Beard, and Ancient Magic by Phillip Matyszak.

I copyrighted the script for Issue 1 and the finished issue, as changes had been made by the time the artwork was done. This cost $110 total. It wasn’t strictly necessary to copyright the script, but since I was going to be sending it to strangers on the internet, it made me feel better to do it!

I will say this once, very loudly: MAILING YOURSELF SOMETHING DOESN’T MEAN IT IS COPYRIGHTED. Also, I am not a lawyer! The fact that you’ve created something does give you ownership of it, though when there are multiple creators it becomes fuzzier if you don’t have clear contracts. The law doesn’t recognize mailing yourself something as proof of anything except the fact that you mailed yourself a copy of that thing on that date. I have seen this idea pop up on forums again and again, and while it’s a wonderfully romantic idea, it isn’t true! You just wasted $0.55 on a stamp. Filing your copyright officially does give you extra protection if you need to sue someone for infringement.

Again, this isn’t strictly necessary, but since I also earn a salary, it A. made me feel better to do it and B. will make doing my taxes more straightforward.

I used Wix to design this site with a pro subscription, and bought two domains for it.

I bought Scrivener and Aeon Timeline to write the scripts and keep my timelines organized. I highly recommend using both!

My time: An eternal mystery

I’ve done all the aforementioned set up and written eight issues of this book with another four drafted and coming along, and I still have no idea how to reasonably estimate this. So I haven’t. Cop out! To be fair, though, I’d be averaging lots of things that are valued very differently (filing a copyright vs. writing a script vs. setting up a website) and the book has only been out for a couple of days, so I don’t have a sense of sales for it.

Coming soon: What does a comic cost? Part 2: Artwork!

If you want to learn more about Andraste, launching this month on Comixology, check out https://www.andrastecomic.com or sign up for Honor’s newsletter at https://www.tinyletter.com/rhonorv.

You can also find Andraste on Comixology.  https://www.comixology.com/Andraste-1/digital-comic/845142 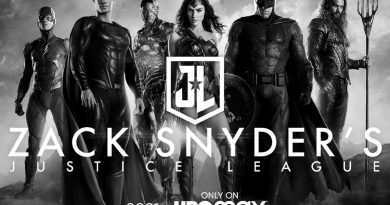