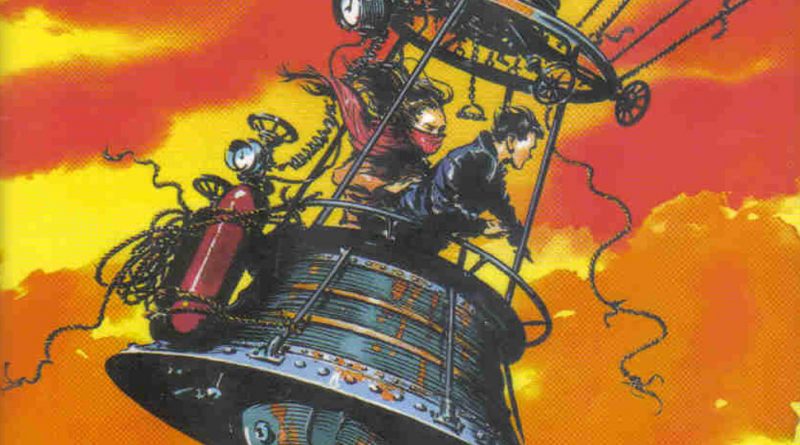 “Its a town eat town world”  as we take a closer look at the post-apocalyptic teen thriller Mortal Engines.

After the massive success of Harry Potter and the Hunger Games, studios are hoping to find the next big Young Adult franchise to bring to the big screen. Universal Pictures believes it has found its new hit in the adaptation of Philip Reeve’s post-apocalyptic adventure story Mortal Engines.  With a budget of 100 million dollars, a good release date and famed Lord of the Rings director Peter Jackson in the helm Universal seems pretty confident they have a hit on their hands. the first trailer for the movie dropped a while back to solid reviews

Which got us wondering, whats the big deal with these books anyway?

So let’s take a look at the source material.

Published back in 2001, Mortal Engines is the first in a quartet of novels by British author and Illustrator Philip Reeve. While Reeve has written several book series he is still best known for the Hungry City Chronicles (AKA The Mortal Engines Quartet).

The novels take place in a post-apocalyptic future where a third world war, called the 60-minute war, has eradicated most life of planet earth. Now, humans survive on giant mobile cities called Traction Cities. Cities and towns scuttle about on the earth’s surface getting supplies by airships or destroying smaller cities and utilizing them for scraps and slave labor.  Think Mad Max meets Agario.

Our first protagonist is young Tom Natsworthy, a teenage Apprentice Historian in the roaming city of London. London has returned to a more Victorian age in both apparel and societal expectation. The 1800’s British class system is now replaced with four major guilds. The guilds do all the necessary work to keep London running.

Natsworthy has lived his entire life on his little section of London. His sheltered existence becomes the lens through which the readers will come to know the world of the Mortal Engines. He is the reader surrogate, there to ask the questions we would ask. Like, why are humans living on mobile freakin’ cities?

He has lived his whole life believing that the practice of destroying other towns, a philosophy known as Municipal Darwinism, is a noble and just form of existence. Conversely living in a static city on the earth’s surfaces seems profane and barbaric to him.

All of this is, of course, challenged when Natsworthy encounters a young girl Hester Shaw. Shaw, who has been horribly disfigured, is brought aboard London after it has chased down and captured the smaller city of Salthook. Their fates become intertwined when Natsworthy stops Hester’s assassination attempt on famed adventurer and head of the Guild of Historians Thaddeus Valentine.

While preposterous, the set up of the story is a novel one. The roaming steampunk styled cities are interesting and the world is well realized. It is hard not to fall in love with the various trappings of this oddly quaint and disturbing future. However, it isn’t enough to hide some of the glaring issues within the text.

Reeve takes a big gamble early on; thrusting Natworthy and the readers on a grand adventure, trading character development for swashbuckling adventures and a brisk pace. Sadly, it doesn’t pay off. Plot twists and character betrayals that should be stunning feel lackluster and tedious because we have no connection with the characters.

The plot is a series of action sequences strung together by plot contrivances, deus ex machinas, and just random events. Which would be fine if there was a solid point to the story. Both the Hunger Games and Harry Potter were thick with allegories and social commentary as well as engaging insight into the human condition. Mortal Engines takes a few passing glances at these but never hits the mark.

There are factions of people in traction cities and static ones engaged in a war to end each other’s way of life, but little is done to convince the reader that either side has much of a point. We never spend enough time with the characters enjoying the fruits of living in rich London to become appalled at the dark truths that allow such decadence. We only learn of injustices and dystopian concepts once they are revealed to characters.

There is no build up, no depth and no real statement or relation to the readers lives for them to have any impact. They are merely presented as bad things that someone should probably do something about. There are elements of fascism, slavery, classism, xenophobia, and other facets of society worth examining that Reeves uses as little more than window dressing. Even that could have been some sort of meta-commentary unto itself but the story is content with meaningless and often uninspired action sequences.

The Mortal Engines, due to its post-apocalyptic steampunk aesthetic, will probably get lumped into Science Fiction. But make no mistake this is pure fantasy. Tom Natsworthy goes on Campbell’s Hero’s journey in an almost paint by numbers fashion. Reeve’s almost does some interesting things by retaining the Hero’s refusal of the call for so long, but again he fails to make Natsworthy’s blind devotion to Municipal Darwinism meaningful. The story essentially comes down to good versus evil, but the characters are so unexplored that even that falls flat.

While I’m clearly coming down hard on the book – I didn’t hate it. I’d be hard pressed to recommend it given so many other good books out there. However, it does have a charm to it. Reeve’s prose is well done and the concepts he utilized, while ridiculous, are fun and engaging. I’ll give the book a 3/5 but even then I’m being generous.

You can find more from Philip Reeve here.

KJ McDougall is one of the editors at WGN (at least until his indentured servitude is completed) Due to his insolence and carelessness in the crafting of the video review (seriously man, how many errors and typos can you fit into one 6-minute video), Mr. McDougall was flogged publicly. And by publicly we mean in the break room. And by break room, we mean the hallway with the snack machine that works 2/3 of the time.   And by 2/3 of the time, we really mean 1/3…if we’re lucky.