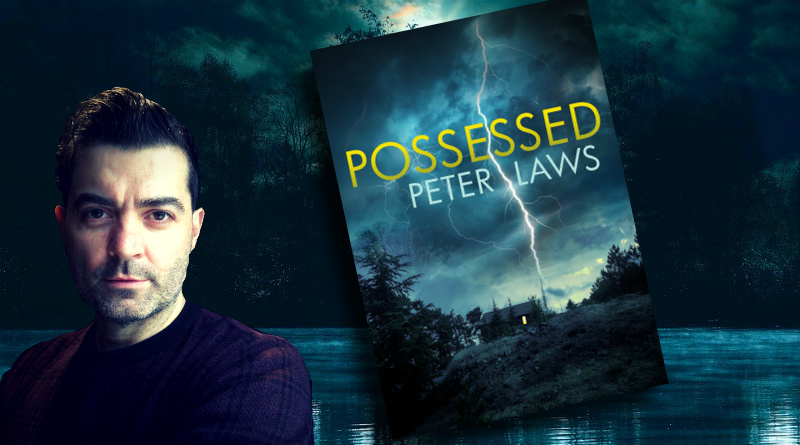 For many years I thought I was a weirdo. You see, I have been a Christian since I was 12 years old but I have also been a fan of horror for much longer than that – and traditionally the two are not compatible at all.

For years, at the Pathfinders youth club, my university’s Christian Union and the church I was on the leadership team at, I would hear people say “Oh you shouldn’t really be watching/reading that!” and the same bible passage would be quoted at me. Philippians 4:8 says:

Excellent advice for anyone, really. Those two lovable time-travelling dimwits, Bill & Ted, all but paraphrased this passage when trying to say something meaningful to the Future Dudes who worshiped them as saviours.

However, my problem was that I did think that a lot of the horror content I was consuming WAS admirable, excellent, praiseworthy etc. but I could never find anyone who saw things my way. That was until one day in October 2010 when I sat down on the train to work and took out my freshly delivered copy of Fortean Times (another thing I shouldn’t be reading) issue 268. In a tiny box at the top left corner of the cover was a picture from The Exorcist (a film I had been repeatedly warned away from, but when I first saw it, found it to be a profoundly spiritual experience) with the strapline HOLY TERRORS: Should Christians Embrace The Horror Film?

And that was how I first heard about the author of today’s featured book review – Peter Laws. I won’t go into the details of the arguments put forward in that excellent article, but needless to say, I had finally found someone who, like me, had apparently conflicting interests. However, unlike me, he had reconciled them, arguing quite eloquently the spiritual benefits to be reaped from an interest in all things horror. By the time I got to work, I was, to use an appropriate phrase, a convert. No longer would I be ashamed of my dirty little hobby – and I have since then used elements, clips, texts and ideas from horror content in the context of a church service quite successfully.

At the bottom of that article, it stated that Reverend Peter Laws – yes’ that’s right, he’s an ordained Baptist minister – was working on his first novel. And in 2017 it was published. Purged is the first part of a crime series about a detective (of sorts) called Matt Hunter. I wrote a review of it on my blog a couple of years ago.

Matt Hunter was once a Church of England vicar who resigned from the priesthood following a traumatic event caused, in his mind, by the very church and God he professed to serve. Now, as an atheist, he uses his extensive knowledge of religious culture and symbolism to lecture on the sociology (and dangers) of religion at a local university while moonlighting as a consultant expert for the police on religiously motivated crimes. And it’s this latter role which tends to land him in some fairly sticky situations! In past adventures, we’ve seen him get mixed up with a “Christian” serial killer, a notorious supposed haunting, and an apocalyptic cult.

And that brings me to Peter’s latest publication – Possessed.

When a naked man with the name of an ancient Phoenician deity crudely carved into his chest scares the living daylights out of a milkman on his early morning round, Professor Matt Hunter is called in to help the police identify him. Revelations about the man lead to a clash of beliefs between Hunter who wants to get the man professional psychological help and a local priest who is convinced he is the first of an oncoming wave of demonic activity. 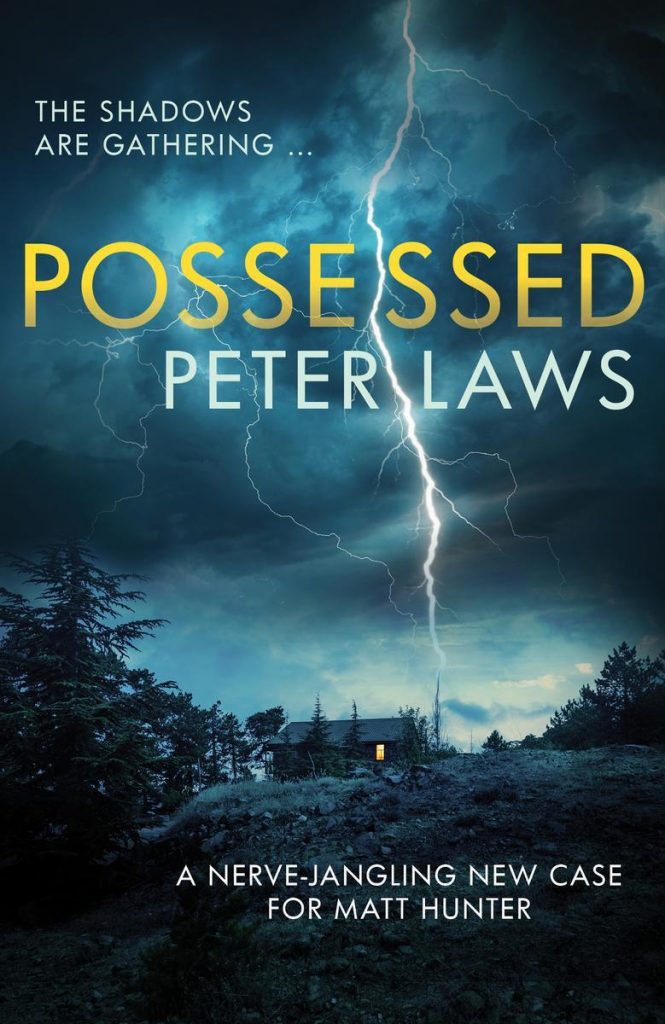 As with all the Matt Hunter novels, what you get with Possessed is an interesting dissection of ideas from both sides of the religious fence with Matt representing science and reason and those he butts heads with standing for faith and spirituality. Matt is to some extent the Dana Scully of these books, always questioning, always looking for a scientific explanation, often to the exasperation of the friends and foes he interacts with. However, Matt rarely comes across as the arrogant, smug cartoon-like atheist the media portrays the likes of Philip Pullman or Richard Dawkins as. Through the mouthpiece of a nonbeliever character, Peter Laws is able to criticize some of the more outrageous and controversial matters which concern many Christians and atheists alike.

And, in Christian circles, few topics are as hotly debated as exorcism and demonic possession.

My wife, Mrs C, trained as a lay preacher – a kind of “voluntary, “deputy” minister who is able to perform certain non-sacramental duties to aid the priest in a busy parish; leading services, taking prayers, preaching, that kind of thing. This involved three years of part-time education and one – just one – of those training sessions was dedicated to exorcism – or to give it its correct, Church of England term, Deliverance Ministry.

When she came home from that session I was desperate to know all the gory the details. She was reluctant to talk about it in too much detail, with it being a sensitive topic, but what she would tell me was that it’s not all about “THE POWER OF CHRIST COMPELS YOU!” or stabbing the Antichrist with the Daggers of Meggido. No, the main take-home message was that people who profess to be possessed by Satan, or Pazuzu, or the spirit of Elvis or Ba’al Berith (the “real” demon in this novel, taken from The Lesser Key of Solomon, a grimoire outlining the hierarchy of demons) ought to be regarded with compassion and an aim to identifying the most appropriate mental health treatment for them.

It’s Matt Hunter who falls on this side of the argument, but when the media latches onto the ideas of possession and exorcism and an unscrupulous documentary maker proposes a TV special with a live exorcism, things spiral wildly out of control. This introduces us to a variety of interesting characters, all with their own motivations which are slowly revealed throughout the novel, such as American celebrity evangelist Bernie Kissell (a kind of conglomeration of Billy Graham, Derek Prince, Joel Osteen and Rick Warren), TV producer Nupa, and Abby, one of the supposed “possessed” who just wants it to stop so she can live her life.

As with his previous books, Peter tackles issues both religious and secular, not being afraid to call out behaviours of both his peers in the church and those who sit on the other side of the fence. The appalling treatment of LGBTQ+ Christians by their supposed “Brothers and sisters in Christ”, the exploitation and spiritual abuse of parishioners seeking help and advice from their trusted pastors who should know better and the sensationalisation of sensitive topics by an uncaring, ratings-chasing media are three such matters touch upon. However, in Possessed, one issue sits head and shoulders above the rest, and it’s one that affects us all; believers, agnostics and nonbelievers alike.

With mental health being such a hot talking point right now, in the hands of a lesser author I would have been concerned that the potentially inflammatory nature of the story might be handled without sensitivity, but, largely thanks to his priestly training (and also because he’s a decent guy) Peter never sensationalizes mental health, nor does he use it as a stepping stone or plot point to move the story forward. Nurture and understanding for, and the consequences of misdiagnosis and exploitation of sufferers,  are very much central tenets to this story – and it’s all the better for it.

Hunter himself wrestles with quite a few inner demons, and when we join him he is still suffering from PTSD brought on by the horrific events he was witness to in the earlier books in the series. It’s great to see a heroic character presented as imperfect as everyone else. And, while Matt, like the aforementioned Scully, is almost always able to provide a perfectly reasonable explanation for what’s going on, the author expertly injects a small element of doubt in both his hero and reader. Professor Hunter repeatedly disproves the existence of The Supernatural. And that’s just the way The Supernatural likes it. All the better to stay hidden until the time is right to strike fear and doubt into the heart of the unwary.

Yes, that demon Matt saw in the corner of his eye was really just a shadow cast when the curtain blew in the window. Of course, it was. That’s the only logical explanation.

“But what if it wasn’t? What if it really was the creature under the bed, the wardrobe monster, the vampire at the window, the thing you fear the most?” Peter as good as whispers in your ear.

“It isn’t,” you say, unsure of yourself.

One last note for the author…

Peter – I didn’t spot the references to The Love Boat you said the book is peppered with (what with never having seen it – but eagle-eyed readers who know the show may fair better than me) but did I spy a sly wink to your oft-mentioned Brutalist Architecture Calendar?

I think I did!

Possessed is published today (Thursday 20th February) by Allison & Busby and is available to buy from all good book stores (and probably some of the rubbish ones too).

Follow @RevPeterLaws on Twitter where he shares lots of horror-based fun & frolics. He also has a YouTube channel full of podcasts, movie reviews, music and the occasional strange happening. You can also visit his website for details on his previous books, music, Fortean Times articles, reviews and more. 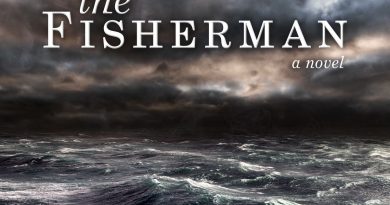 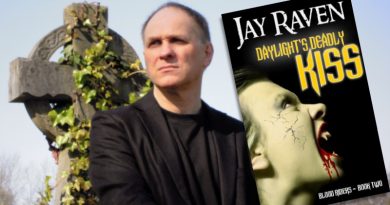 One thought on “Book Review: Possessed by Peter Laws”