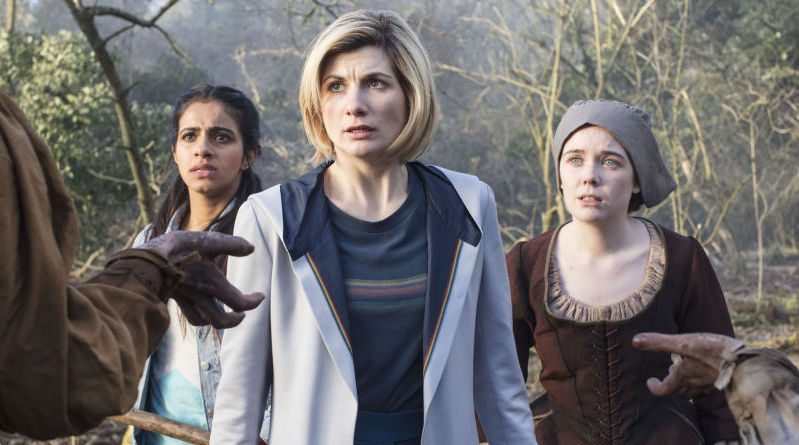 Finally, we can return to our places behind the sofa. Well at least my 5-year-old did (I truly am a bad parent) He’s still there! Doctor Who returned with ‘The Witchfinders’ this past Sunday. Written by Joy Wilkinson and directed by Sallie Aprahamian, it sees our TARDIS crew on the hunt for Elizabeth I’s Coronation. She should have got that right; she was married to the monarch! There’s also mud witches and the addition of Alan Cummings’ King James I (or VI depending which border you’re on!). Oh and Dutch angles, so many Dutch angles!

The Doctor, Yaz, Ryan and Graham find a good old witch trial happening at the local lake near Pendle Hill. Unfortunately, the old woman in the ducking chair didn’t float, is not made of wood and as such does not weigh the same as a duck.

After the Doctor tries to save the old woman, she meets Becka Savage, the local landowner. She is conducting the witch trials. The Doctor uses her Psychic paper to claim she is the Witchfinder General. 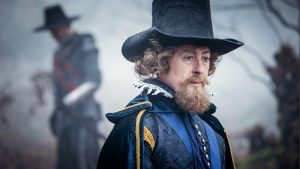 But unbeknownst to everyone they’re being watched by King James I. The Doctor uses the Psychic Paper again, but James states a woman can’t be the Witchfinder General, so Graham is. It turns out that there are aliens under Pendle hill and they have been locked up there for a while. But due to Savage knocking the Guardian Tree down, they (the Morax) intend to possess King James and take over the world.

This episode is a good simple Doctor Who story, it’s scary, clever and despite being historical, it still resonates with today. But we will get to that.

At one point I was led to believe that this episode would actually have some witches. We see Willa Twiston played by Tilly Steele burying her grandmother. She was the villages’ medicine woman and the one who died being tried as a witch. Tendrils begin to rise from the ground making us think she is doing something witchy. But it’s not like that. 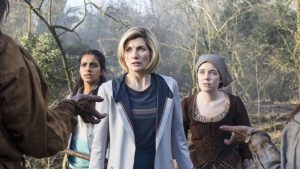 Siobhan Finneran plays Becka Savage the landowner with a secret agenda to drive out Satan. She plays the role of judge and executioner well. We later find out that she’s only doing it to shift blame and attempt to save herself. She cut down the tree, she released the Morax and she has been infected by them.

In a very similar way to Ecceleston’s episode ‘The Unquiet Dead’, the Morax use the bodies of the dead women. They infect or possess the dead and this is where the episode gets scary. Mud covered zombies that rise from the grave to blast you and give chase; it made my little lad run and hide behind his cardboard castle. The make-up of the monsters was simple, a bit of brown mud and goo, some contact lenses and dirty clothes. It’s enough to scare kids and tell a good story. 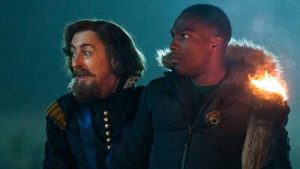 In 1597 he wrote Daemonologie, which was a book written from his personal experiences opposing witchcraft. It also mentions vampires, werewolves, and even demons. I wonder, is anyone still wanting a Doctor Who/Supernatural crossover?

I received a few comments and messages about how this episode was “pushing the female agenda”. How it is “political correctness gone mad” and that it’s all about the inequality of women and how they’re being persecuted as witches. Seriously, I received a message that said the episode was turned off after the fantastic line:

It’s true, but it’s also an extremely good line as well as being one of the few moments in this series that have brought attention to the fact the Doctor is now female. The fact that any woman who thought differently, or practised medicine, or even for no reason at all could be accused as being a witch is frightening. The Doctor is an alien and she does have a magic wand, she is a prime example of being a witch. But by saying that her being ducked or lamenting about easier times as a man is pushing some agenda is just ridiculous. 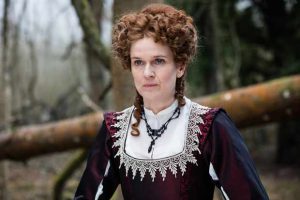 These trials happened and between 1500 and 1800 in the Western World it is said that 200000 ‘witches’ were tried, tortured and executed. The majority were women. In later years James I began questioning his own beliefs as he wrote to his son:

“I pray God ye may be my heir in such discoveries … most miracles now-a-days prove but illusions, and ye may see by this how wary judges should be in trusting accusations”.

The rest of the TARDIS crew were mainly lost amongst the rest of the story, but that’s the problem with having a lot of main characters in a 45 to 50-minute show.

Overall it was an entertaining episode and if you didn’t like it you may be A WITCH!

There’s only one way we can decide that!

One thought on “Doctor Who – The Witchfinders – Review”