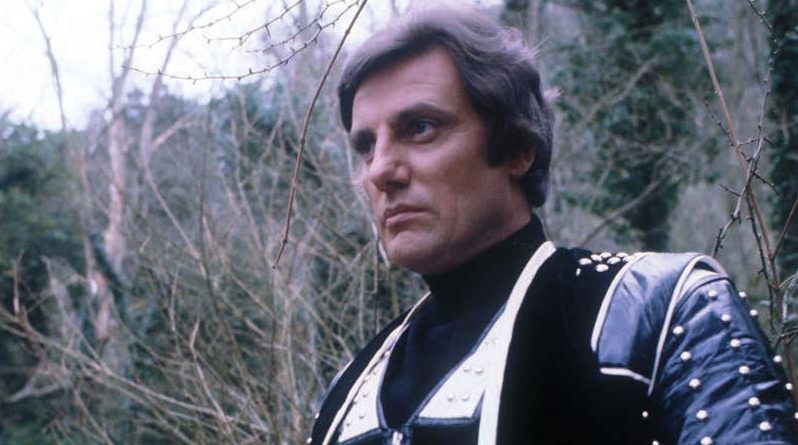 On 3 June 2019 Paul Darrow passed away, aged 78; nine months to the day from our losing his Blake’s 7 co-star, Jacqueline Pearce. It is my reluctant privilege to attempt to pay tribute to Paul just as I did to Jacqueline, though I must leave the writing of a full obituary to others far better qualified than me. Instead, this is going to be a personal celebration of one of Darrow’s most iconic and well-remembered roles, namely the galaxy’s most cynical renegade – Kerr Avon. Multiple spoilers for Blake’s 7 follow…

Although the series Blake’s 7 began its first series in 1978 with heroic freedom fighter Roj Blake front and centre – the clue was in the title – more than a few of us found ourselves rooting for the morally ambiguous Kerr Avon instead. When we meet him in the second episode, Space Fall, Avon’s character is revealed in a telling exchange with Blake. Asked to explain why his plan to defraud the Federation of 5 million credits through computer hacking failed, Avon drily replies: “Because I relied on other people…”

Right from the outset Avon’s cynicism and self-centred approach put him at odds with Blake’s idealism and in the very next episode, Cygnus Alpha, he tries to seize control of their new ship, the Liberator, with Jenna’s help. The latter, however, is firmly ‘Team Blake’ and refuses to abandon her leader on the surface of the planet, and fly off into the sunset with Avon and enough precious gems to choke a mutoid. Much to Avon’s disgust, Blake continually pursues a policy of using the Liberator to fight the Federation rather than running and hiding, thus putting all their lives at risk. Avon’s sardonic put-downs of his shipmates for their loyalty to Blake become one of the most enjoyable aspects of the show. Case in point, in Time Squad:

“Blake: Except that we’re not going to hide. Very soon now the Federation ships will know exactly where we are. Or at least where we’ve been.
Vila: I don’t follow you.
Avon: Oh, but you do. And that’s the problem.”

When new recruit freedom fighter Cally states in Mission to Destiny “My people have a saying: A man who trusts can never be betrayed, only mistaken” Avon swiftly retorts: “Life expectancy must be fairly short among your people.” Incidentally, there is a moving call-back to this moment at the start of season 4 where Avon recounts Cally’s saying, following it up with the devastating truth: “Cally was murdered. So were most of her people.”

Despite the animosity between them, Avon saves Blake’s life in episode 5, surprising himself, perhaps, even more than Blake, but dismissing it as an “automatic reaction.” Blake, in turn, values Avon’s intellect and advanced computer skills, and often relies on him to sort out problems with Zen and the auxiliary computers, hence this amusing exchange in season 2’s Redemption:

“Blake: Avon – concentrate on Zen. Give priority to the detectors and the navigation systems. And then see if you can get us some scans.
Avon: Is that all? What shall I do with the other hand?
Blake: I’ll let you know.”
Over time Avon develops a grudging respect for Blake and when Blake is lost at the start of series 3, never gives up searching for him. This leads to him meeting up again with Blake in series 3’s finale Terminal (albeit through drug-induced illusion rather than reality):
Blake: It must have been so dull, having no-one to argue with.
Avon: Well now, there were times when your simple-minded certainties might have been refreshing.
Blake: Careful, Avon! Your sentiment is showing.

This sets the scene then for the final episode in season 4 where Avon seeks out Blake again, for real this time, but a tragic misunderstanding and his paranoia make him shoot Blake. A dark, but somehow fitting, end to the relationship which has always been at the heart of the series.

While Avon may have developed a reluctant admiration for Blake, he was never very complimentary about most of his crewmates; in particular the cowardly thief, Vila Restal. Their bickering is one of the highlights of the programme. There are so many quotes one could choose but I will settle for this one, also from Redemption:

“Vila: When you get Zen working, ask him to prescribe something for a headache, will you? I’ve got this shocking pain right behind the eyes.
Avon: Have you considered amputation?”

Enjoyably, Vila is able to give as good as he gets; eg (in Killer)
“When Avon holds out the hand of friendship, watch his other hand. That’s the one with the hammer…”
Fans of Avon and Vila’s banter will particularly enjoy the episode Gambit where they get to combine criminal forces in order to defeat a gambling computer; they may be less keen on series four’s Orbit which sees the nadir of their relationship, as Avon comes within an inch of killing Vila. Avon’s final statement “You are always safe with me” is delivered perfectly by Darrow, with a hollow flatness which implies he knows he’s destroyed their friendship for good.

In series 3 when Avon, at last, is able to take over the reins (though not the series title) from Blake, he faces a challenge for his leadership in new crewmates, Dayna and Tarrant. While Avon appears to respect Dayna he never accords young whippersnapper Tarrant that favour.

This exchange in Sarcophagus is revealing on both sides:
Tarrant (to Avon): When you found me on the Liberator, it was quite a blow. And every time you look at me it hits you harder, doesn’t it? I’m faster than you and I’m sharper. As far as it goes, I’ve made a success of my life. But you? The only big thing you ever tried to do you failed at. The greatest computer swindle of all time… but you couldn’t quite pull it off, could you? If it hadn’t been for Blake you’d be rotting on Cygnus Alpha right now. No, you failed, Avon. But I win. Not just at games. At life.

Avon: You also talk too much.
Tarrant: Be thankful I’m restricting myself to talk.
Avon: Well now, that’s fascinating. You mean you can do something else?

Just when we think that we’ve got sardonic, misanthropist Avon all sewn up there are a couple of powerful episodes in which Darrow shows us a more complex picture. Season 2 Episode 9 Countdown gives Darrow an excellent opportunity to show us a more nuanced performance. We learn that Avon was once in love and still mourns the death of his lover, Anna Grant. The pain of her death, in fact, has contributed greatly to his aloof and cynical persona. Faced with the anger of her brother, Avon admits: “If there had ever been a time when I could have given my own life to save her, I would have done it.

The only grain of consolation that I have …is that Anna knew that.” This episode sets the scene for one of the best episodes of all time, series 3’s Rumours of Death, where Avon goes through both physical and mental torture to discover the truth that Anna Grant didn’t die after all and wasn’t the person he thought she was. This episode is also a stand-out for the relationship between Avon and Servalan – as usual, there is a wonderful frisson of sexual chemistry between them, but there is also a sense in this episode of the pair being united by a deeper sense of pain, isolation and the experience of being betrayed.

In Sarcophagus Avon claims he will not allow this experience to destroy him.
Cally: I’m all right.
Avon: No you’re not. But you will be. Regret is part of being alive. But keep it a small part.
Cally: As you do?
Avon: (Smiles) Demonstrably.
Yet it is fair to say that the beginning of the descent into a darker, more paranoid Avon as shown in the fourth series has its roots in the betrayal by Anna Grant.

I’m going to finish this tribute with an exchange arising from one of my favourite relationships in the show – no, not Servalan/Avon, which I wrote about already for my tribute to Jacqueline, but rather Orac and Avon.

Avon frequently clashes with the irascible super-computer, recognizing that while his usefulness makes Orac indispensable, his know-it-all manner makes him more irritating than a grain of sand in Travis’s jumpsuit. This scene in Deathwatch demonstrates this beautifully:

Paul Darrow’s long-suffering, dead-pan delivery is perfect here. Throughout the show, his delivery of the wonderful lines made them unforgettable as did his raised eyebrow and sardonic curl of the lip. When Avon was on screen, you couldn’t take your eyes off him. Darrow brought Avon to life in a way which perhaps did a disservice to the actor and made it impossible to avoid being associated with the role ever afterwards.

However that role has brought a huge amount of pleasure to the fans of Blake’s 7, both now and into the foreseeable future, with the series continuing to be available in a variety of formats, and with new adventures on audio via Big Finish. Darrow’s unforgettable rich, deep voice will live on for as long as the fans continue to watch and listen. In the words of Tarrant: “Gone to the great cyberneticist in the sky.” May he rest in peace.

One thought on “A Tribute to Paul Darrow’s Avon”