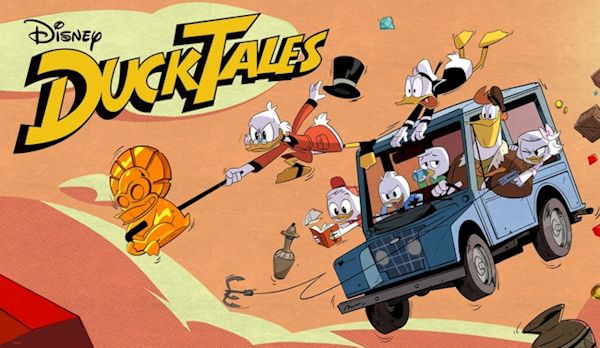 Look, don’t get me wrong I love The Baby Yoda Show (as my daughter has dubbed it), but it doesn’t have very good writing. It is unbelievably predictable past the first two episodes and uses tired old tropes. It gets by largely on saying “Hey remember Star Wars?” and “Look more Stars Wars.” “Get a load of all this Star Wars!” I am not complaining, I’m really not. I am a massive fan of the show. It is fun, re-watchable, and probably the best thing Disney has done with the property since Lucas sold it to them. But the Duck Tales reboot is on another level.

First up is the theme song. In my opinion, the Duck Tales theme is the best song ever written for a TV show. It is unbelievably catchy. Disney was smart to keep it on. The updated version makes very few changes and is a solid cover. Sure, Felicia Baron can’t hit the highs in the “woo hoo” part of the chorus like Jeff Pescetto, but it isn’t bad by any means. This also really demonstrates the creators approach to the reboot – “If it ain’t broke, don’t fix it.”

So many reboots and re-imaginings are related to their source material in name alone. But there is no attempt to fundamentally alter Duck Tales. They don’t really change the characters as much as simply add depth. Scrooge still loves money, Launchpad still crashes the plan, and the kids are all lovable trouble makers. But Scrooge isn’t just greedy here, he’s a keen business man. He uses his money to fund adventures that he goes on to enhance his business. He is a rich, crotchety old swashbuckler who deeply loves his family. Instead of just a clever old man, Scrooge is the most formidable member of the team with decades of fighting and adventuring experience. David Tennant is simply amazing as Scrooge McDuck. The Doctor be damned – this is the role he was born to play.

The boys finally have individual personalities. Not to the extent as say the Ninja Turtles. There isn’t a techy one and a wise cracking one, anything like that. But they have individual quirks that make them feel like real characters – like brothers.

Webbigail (Webby) and Ms. Beakley are no longer damsels in distress, they are strong female adventurers in their own right. These are the biggest departures from the original series. Ms. Beakley is a former secretive service agent, and she has raised Webby in the mansion. As a result Webby knows how to clear a room with hostages but not how to play hide and seek. At the same time the writers aren’t over compensating for the past or ticking off a box on their diversity checklist. This is what diversity and inclusion looks like in storytelling. The characters have strengths and flaws. They are as capable as their male counterparts but also just as likely to screw something up too. They are not sidekicks or objects to be saved or protected, they are family members who share in the drama and adventure with equal importance to the tale.

There are stand alone plots and over arching mysteries to each season that are a blast to watch. The writers use the inherent weirdness of talking animals to their advantage. The show jumps from genre to genre without it clashing or feeling disjointed. Science Fiction, fantasy, comedy, drama, all flow seamlessly sometimes in a single episode. The humor is both for kids and adults, but not in the usual way. There aren’t grown up jokes slipped in that will go over kids heads. But, there is wit alongside silly, it’s simply smart writing.

The writers of Duck Tales really know how to do fan service properly. They don’t just drop Easter eggs from time to time.  Nor shoe horn in references or characters that stand out like a dog turd on your living room floor. They find things that were interesting about old Disney properties and they play with them, expand upon them, and change them up to fit into the universe (and more importantly the story) in organic and satisfying ways. The show builds some great stories around classic Disney shows like Tale Spin, Darkwing Duck, and of course the original Duck Tales.

As a father of three, I have been forced to watch my fair share of crappy kids shows. And I’ve exposed my kids to some of the crappy kid shows that I used to watch (suffice to say the Super Mario Super Show is not the cartoon powerhouse it was when I was 8.) Duck Tales is one show that I have not only willingly sat down and watched with my kids, but I have encouraged them to watch it so I could binge seasons with them. We’ve watched the original series as well. It holds up OK and all three of my kids enjoy the old series. However, all of us agree – the new show is easily better.