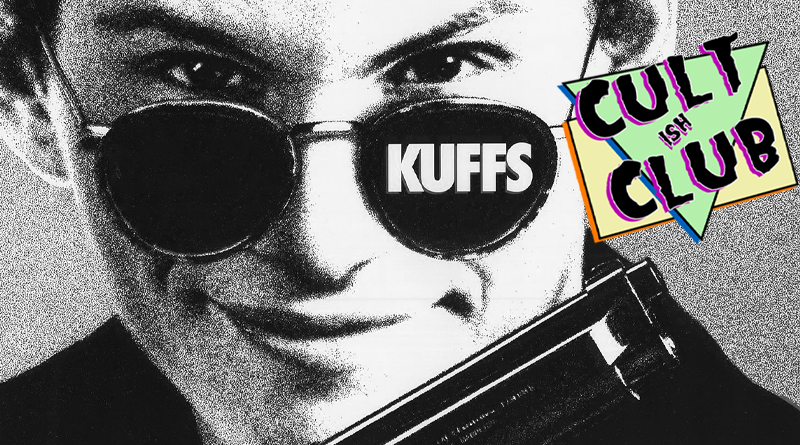 Welcome to our members-only establishment, the Cultish Club. Requirements to join? To enjoy the films that have slipped between the cracks because they’ve been rejected or have been forgotten by mainstream film audiences. Either way, our mission is to remind you of some lost gems, or to reevaluate those films that people overlooked the first time around.

This time, the newest member of the WGN family, Robert Johns, is here to tell you all about a movie he loves from the early 90s; a film which was supposed to be a big hit, but for whatever reason just wasn’t.

I don’t know why we chose Kuffs but I’m glad we did. It was way back in the mists of time, a time before mobile phones (unless you were super-rich and could heft a house brick), the internet, and when all film reviews were presided over by the simply fantastic Barry Norman. Actually, looking back, I think I had been influenced by his review of Kuffs on Film 92. The only bit of that review I can remember is a chunky bloke getting kicked in the cobblers by Christian Slater!

Anyway, it was the Summer of ’92 and me, my best friend Richard, and a random assortment of friends from our college had met in Leeds for a Saturday get together. This meeting had been arranged entirely through face to face contact, telephone calls, and letters (remember them) and, surprisingly, everyone arrived at the same point at the same time. There were eight of us in that group but for me and Richard, we had our hearts set on two young ladies: Kay and Susan. The others were invited because we were inept at asking girls out and tried to make it look like a friend’s gathering. Spoiler alert: despite our best efforts, we never really got far with Kay and Susan, but this Saturday we ended up at the doors of the ABC Cinema in Leeds. The group consensus was that we would watch Kuffs, and Richard and I conspired to sit next to our belles to share our popcorn and turbo-chug fizzy cola. The lights went out, the projector whirred into life and…

The film opens with a shot of a young and carefree couple, Maya (Milla Jovovich) and her boyfriend; George Kuffs (Slater), dancing around in their underwear to Timbuk3’s The Future’s So Bright I’ve Got Wear Shades. Maya tells George that she’s pregnant and then wanders off to change the music CD. In the meantime, Kuffs breaks the 4th wall and tells us everything we need to know about him. He is an irresponsible, underachieving waster and, as if it couldn’t get any worse, he confides in the audience that he is going to dump Maya because she’s pregnant. And this is where the magic of this film starts to shine because even though we know what a reprehensible turd he is, we still quite like him! 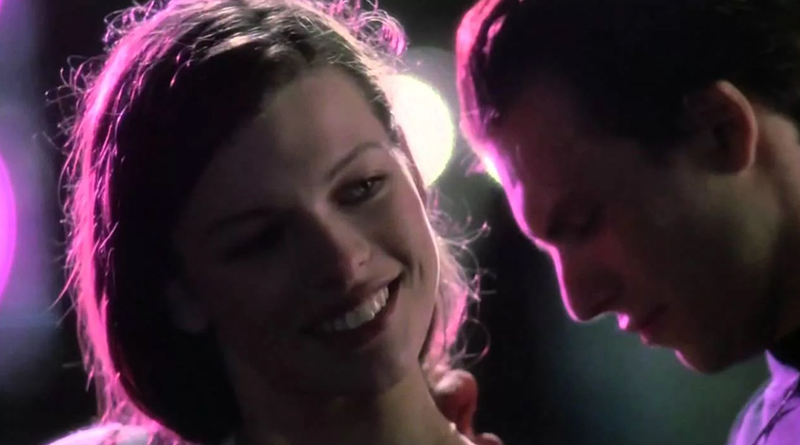 The film cuts into a crawling exposition painted on the side of (a very tall) house which explains about some private police force in San Francisco where rich people paid for security. Blah, blah, blah, it still exists, and they’re called patrol specials. Cut to, a patrol special car catching some impressive air as it responds to a robbery and takes one of SF’s famous undulating steep roads too fast for gravity. It’s almost ludicrous, but it’s not. It sets the tone for the film right there and then, it’s an action-comedy film. The editing of this film is first-rate and the set up of the shots is pure artwork. When the patrol special arrives at the scene of the robbery there is a brief bit of gunplay and we learn that the patrol special has some history with the leader of the gang of robbers, the sartorially challenged Kane (played excellently by Leon Rippy). The patrol special manages to kill one of the gang and, as the rest of the cowardly bunch flee in their cargo van, we get a hint of the artiness of the film as an overhead shot shows the dead bad guy lying in a pool of yellow paint which is being invaded by a flow of crimson blood. This is the first of many visual treats of this film which I will let you discover for yourselves.

George Kuffs arrives outside the patrol special’s office because it happens to be his brother’s birthday, and his brother (Bruce Boxleitner) is the patrol special we just met at the robbery. Kuffs is carrying a colossal turkey to cook for his brother’s birthday and then, Kuffs tells us, he’s going to squeeze him for a loan. But we are told to keep that a secret. And guess what? We do! The turkey soon falls victim to a security truck, Kuffs demonstrates how low he will stoop by tricking his brother into paying for a birthday meal AND asking for a loan. His weary brother tells him to get a life, maybe even work for him as a patrol special and then gets gunned down by Kane. 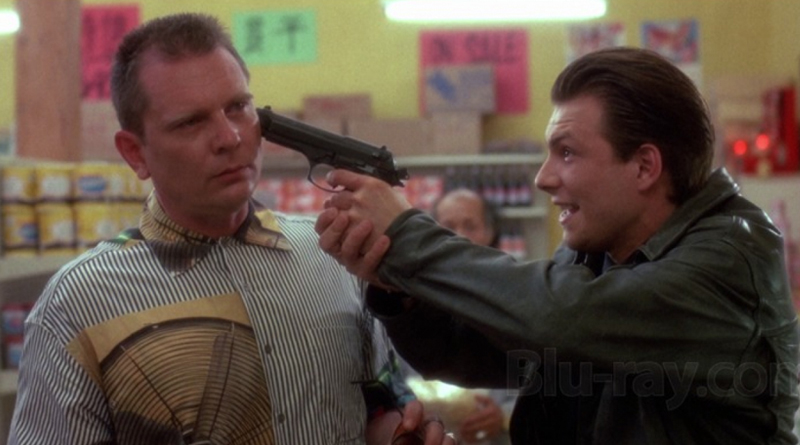 Kuffs discovers that the killer will go free and so he becomes a patrol special to avenge his brother’s death. But this is no normal revenge film. None of the bad guys like him but nor do the good guys. No one likes or trusts Kuffs. He’s sent out with a San Francisco cop, Ted Bukovsky (Tony Goldwyn) who is there to stop Kuffs getting killed until he screws up enough to get fired. Ted is none too pleased with the arrangement, Kuffs comes up with a novel plan to get rid of him and eventually, after much friction, they become friends. But wait, I’m not going to tell you the whole plot because I want you to watch this film. Ultimately all comes good in the end and the journey is just a hilarious mix of comic events and good luck. Kuffs is the ultimate anti-hero, we never really condone any of his actions, but we somehow go along with it.

So, back to Leeds and although our amorous advances never really paid off Richard and I did find a film that, in Richard’s words “was just right for us at the time”. We waited anxiously for the release on VHS and, on release day we made our way to the local Blockbuster video rental store. But, Kuffs wasn’t on the shelf! We asked the girl behind the counter, a disinterested raven-haired beauty a few years older than us if there was a copy anywhere. She looked on the racking behind her and there was a copy with a paper reserved ticket in it. “It’s reserved,” she told us and then, seeing our disappointed teenage faces, added: “But hey!” She whipped the reserved ticket out and let us rent it. I still love her now, whoever she was. We sat and watched that film, more than once. 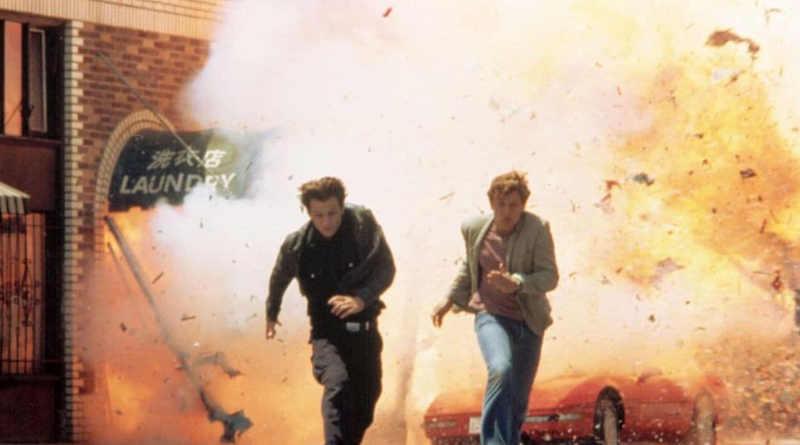 Now we had seen the original cinematic release and there is a very significant difference between that, and any other release and it is the famous Ted cursing scene. He and George together drop the F-Bomb thirteen times in less than a minute but in the VHS version all but one were hidden under a bleep or riff. The final one delivered with a preceding pause to make you think, will they bleep this one too? It is dropped, in full unedited glory, with perfect comic timing. Now I’m told that the bleeps were to get the film a rating that would appeal to Slater’s younger fan base and where it might have ruined most films, it, amazingly, works. Well, it did and it didn’t because the film was not a box office success.

The film has its flaws, minor continuity errors that niggle, but not enough to spoil the film. And Slater’s breaking of the 4th wall is a key feature of this film but isn’t for everyone, but I ask you to give it a chance. There are some hidden treats if you know where to look… The conversation in the cemetery between Kuffs and Sam Jones looks like a continuity error but is, in fact, some very clever artistic camera work. In fact, the camera work throughout this film is clearly well thought out and, if you look for it, you’ll be pleasantly surprised. Richard always found Kane’s dress sense a source of joy, especially the T-shirt worn by the villain which features a print of Kane’s face on the front. As Richard says, a touch of genius. This film is really the sum of all these little things, and it all works together like some magical recipe. 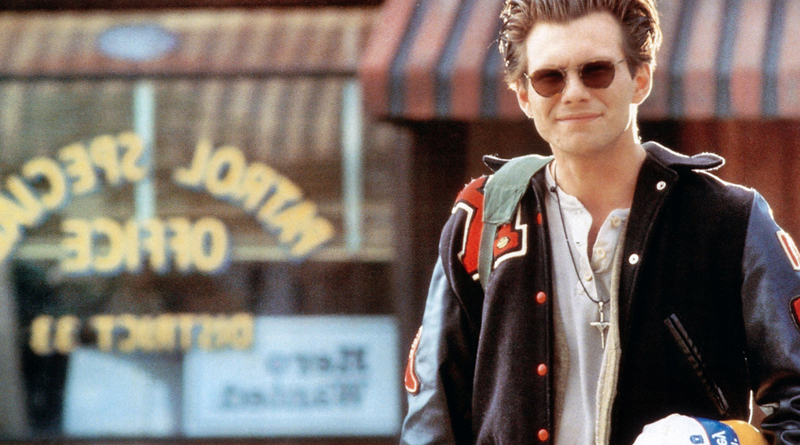 We are almost thirty years on from its release (!) and Richard and I still love this film. Richard told me: “It was the right film for the right time. A time when ‘friend for life’ bonds were being formed and cemented by our enjoyment of this film. It’s an underrated classic!” In our way, growing up, we were a little bit like George Kuffs and in other ways, we lacked the bottle to be as cocky as him. We still drop lines from the film into conversations, almost unconsciously and sometimes as a shared joke that no one else gets.

So, what can I say about this film in closing? Well, I won’t lie… it is a Marmite film. You will either love it or hate it, there is no area in between. It was not a box office success and it won’t ever win any awards. Most of the reviews are scathing but still, I love this film. It was written for Slater and no one else could have played the part. It is born from an era of unconventional movie cop heroes, but Slater’s character is more maverick, in some ways, than Lethal Weapon’s Martin Riggs, and has more attitude than a stroppy teenager with no WiFi. I struggle to find any part of his behaviour that isn’t morally wrong, yet I still cheer him on! I don’t get it, 28 years later and I still can’t explain the psychology!

It shouldn’t work but it does and perhaps that is why it’s such a good film.

Who is Robert Johns? Robert Johns is a paranormal investigator and author whose work can be found on Amazon (the retail website, not the large South American river) and on the spooky short story website www.badgerscrossing.co.uk. You can follow the adventures of the absinthe-addled man of mystery on Twitter (@RobertJohnsWho) and Instagram (whoisrobertjohns). 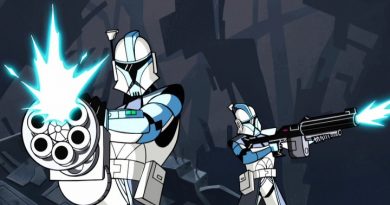 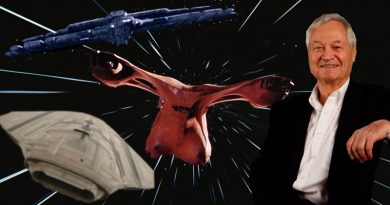