Netflix renewed horror series The Haunting of Hill House. Well, we say renewed, but the series will now be an anthology series called The Haunting and Season 2 will be called The Haunting of Bly Manor. The new story will adapt Henry James’ 1898 gothic horror novella The Turn of the Screw. The novella was previously adapted as a Broadway play in 1950 and as a movie called The Innocents in 1961. It is said the new season will be released in 2020. A release around Christmas could be possible as the holiday plays a role in the novella. The story will be about a governess to two children who become convinced the grounds of the titular manor are haunted.

US broadcast network CBS has renewed The Big Bang Theory prequel/spin-off Young Sheldon a two season renewal. Giving the sitcom a renewal for Season 3 and 4 is not surprising. The series does well in the ratings, parent show The Big Bang Theory is ending this season, and a potential second spin-off is not going to be ready for next season.

We all expected it, but it is now official. Netflix has cancelled Marvel’s The Punisher after two seasons and Marvel’s Jessica Jones after three seasons. Netflix seems to want to get it all behind them in one go, as Jessica Jones Season 3 has not even been released yet, nor has a release date. There apparently will be a cool off period of two years for all these series (including Daredevil, Luke Cage, Iron Fist, and The Defenders) before Marvel can revive them on another platform. And that could be possible, going with Marvel TV’s chief Jeph Loeb in this letter to fans.

To all who have served. All who know loss. All who love and understand Frank and his pain. It has been an honor to walk in his boots. I’m endlessly grateful to the comic fans and the men and women of the Armed Services and law enforcement community who Frank means so much to. Thank you to the USMC and all the wonderful soldiers who trained me. Go Hard. Be safe.

Taken a few weeks back at the table read for our SERIES FINALE. I love these people to the moon and back. It has been a dream to play Jessica alongside my amazing cast and the best crew in the business for these past 5 years. I am so grateful for every second of it. We have THE BEST fans. You guys mean the world to me and I appreciate you beyond words. The final season of #JessicaJones is coming later this year and I am proud of how we complete JJ’s journey. I can’t wait for you all to see it. Stay tuned and more to come. 💪🏻🖤 (Also my creator/ showrunner/ partner/ bff @melissa.rosenberg is totally wearing a #krystenknitter original ☺️☺️) @rachaelmaytaylor @ekadarville @carrieannemoss @netflix @marvelsjessicajones @marvel

Also, rapper Eminem, known for his title song for “Venommmmm,” is not pleased with the cancellation of The Punisher.

REGARDING YOUR CANCELLATION OF THE PUNISHER, YOU ARE BLOWING IT!!

Friends from College will not be returning for a third season. Thanks to everyone who watched it. Happy Presidents’ Day!

Amazon Prime Video have released a trailer for the fourth season of The Man in the High Castle. With it they also confirmed that the Philip K. Dick adaption will end with Season 4. The final episodes will be released this Autumn.

Syfy has cancelled their TV adaption of George R.R. Martin’s sci-fi story Nightflyers. Syfy aired the first and now only season daily past December. Recently Netflix has released it internationally.

Netflix has ordered a ten-episode first season of Medical Police, from the creative team behind dark comedy Childrens Hospital. Erinn Hayes and Rob Huebel will star, while Rob Corddry Krister Johnson, Jonathan Stern and David Wain will be writers and executive producers.

Netflix also ordered a first season of Hollywood from Ryan Murphy (Glee, American Horror Story), which will be “a love letter to the Golden Age of Tinseltown.”

“Hollywood” — my new Netflix show co-created with Ian Brennan — begins principal photography this summer. A love letter to the Golden Age of Tinseltown, this straight-to-series production will be my third show for Netflix and I couldn’t be more excited or proud about the work we are doing together. More to come…

Netflix will release the second half of Season 5 of comedy Arrested Development on Friday, March 15.

Mike Colter (Marvel’s Luke Cage) has been cast as the lead for CBS’s pilot Evil, a supernatural drama from Robert and Michelle King (The Good Wife). While it was a long shot anyway, this probably means that any potential revival of Luke Cage at another outlet than Netflix is not on the cards. Actors often have to be kept available for a certain amount of time between seasons, even after cancellations. It is still possible Luke Cage could be revived later. After all, there is a two year cooling period before Marvel can bring the series to another outlet anyway. But do not hold your breath.

The Hollywood Reporter has learned that videogame developer Ubisoft and Atlas Entertainment (Wonder Woman, 12 Monkeys) are teaming up to create a TV series based on the Indian Ocean set open world pirate videogame Skull & Bones. The videogame itself has not yet been released, but is expected this year for Microsoft Windows, Xbox One, and PlayStation 4. Not much is yet known about the plot of the TV series, but it is said they series will have a female lead. Amanda Segel (Person of Interest) will write the pilot and executive produce, as will Andy Horwitz (American Hustle) and Richard Suckle (Wonder Woman).

CBS has ordered a comedy pilot starring Jaime Camil (Jane the Virgin) as the son of a wealthy who suddenly get cut off from his father’s fortune. He and his wife then have to move in with his estranged sister. Camil is also executive producer, as are Jennie Snyder Urman (creator Jane the Virgin) and Alex Herschlag (Will & Grace, Modern Family) who will write the pilot.

Syfy’s adaption of IDW’s comic Wynonna Earp has run into budget trouble in its fourth season. IDW Entertainment is producing and funding the series itself and now has need of new funds. Syfy and IDW both say they are committed to the series, but this is something we will keep our eye on.

I don’t know anything, unfortunately. All we know is we aren’t shooting right now and don’t know why

Natalie Dormer (Game of Thrones, The Fades) has joined Showtime’s Penny Dreadful: City of Angels. The sequel series to the Victorian original will move the horror to 1938 Los Angeles.

US cable channel Freeform has released a trailer for Marvel’s Cloak and Dagger Season 2. The new season starts Thursday, April 4 with two episodes.

Netflix released a cast announcement trailer for Season 2 of Altered Carbon. No release date is yet known, but the new season will have eight episodes. An anime spin-off is also in the works.

Netflix also released a trailer for The Order. Season 1 will launch on Thursday, March 7.

CBS All Access has released a first proper trailer of the fourth iteration of The Twilight Zone, which will start on Monday, April 1.

Witness the reimagining of the most iconic series of all time, hosted by Academy Award® winner @JordanPeele.#TheTwilightZone premieres April 1, only on CBS All Access: https://t.co/GMh71t274n pic.twitter.com/YKGQantngT

The BBC has released a teaser trailer for their adaption of Philip Pullman’s His Dark Materials trilogy of fantasy novels. Apart from “coming soon” we do not know when the first series adapting the first novel, Northern Lights or The Golden Compass as it is known in some other parts of the world, will premiere. 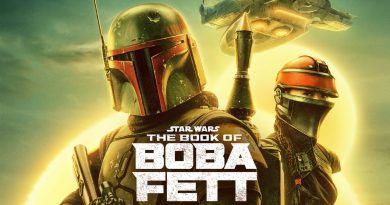