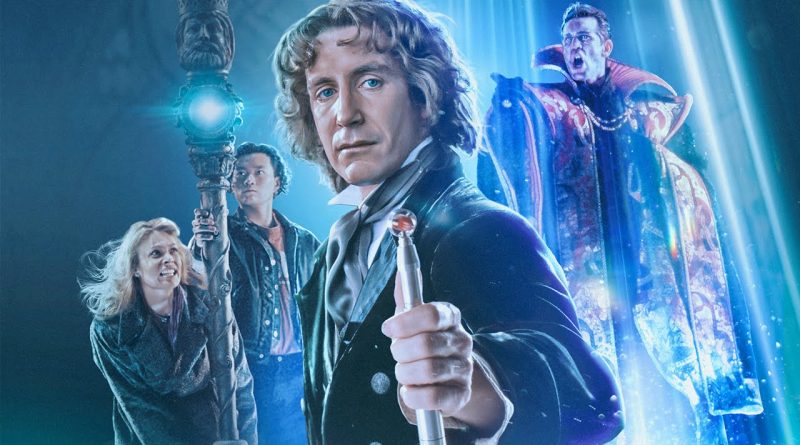 Want to ring in the New Year with everyone’s favorite Time Lord? While we can’t get you inside the TARDIS we can help you start the Doctor Who movie at the right time so you can do the count down with the two hearted wanderer of time and space.

A Doctor-less Christmas was a hard blow to many of us. The tradition Russell T. Davies started with the revival, while new in the scheme of things, felt so right. Yet, I find something rather comforting in a Doctor Who New Years.

You see as an American nerd growing up in the 80’s and 90’s I was aware of Doctor Who, but didn’t really have access to it. My library had the Talons of Weng-Chiang on VHS and occasionally the local PBS station would carry episodes late at night. But my real introduction came in 1996 with the only full length televised 8th Doctor adventure Doctor Who: The Movie (the episode has many different titles like The Enemy Within or my favorite The Lord of Time in France, for simplicity we will stick with Doctor Who: The Movie.)

I was in love with it by the commercials alone. The excitement I had when the episode premiered was palpable. And for me – it didn’t disappoint. As a kid I was simply enamored with the mythology, the aesthetics, and most off all Paul McGann as The Doctor. I recorded the movie off TV and for years the bootleg VHS was a prized possession in me ever growing collection of geekdom.

Since the release of the DVD watching Paul McGann battle against Eric Roberts Master has become a staple of my New Year’s Eve traditions. I watch it every year – and sync it up so the episode counts down to the New Year with me. While I welcome Judi Whittaker’s next episode, she’s going to be hard pressed to take the place of McGann for my holiday tradition.

Doctor Who: The Movie has its detractors (largely to a few scenes which muddle or go against canon) However, it does an amazing job of fitting everything that makes Doctor Who – Doctor Who, into just under 90 minutes. It has a regeneration, a brilliant Doctor, a scenery chewing Master, The TARDIS, decent companions, solid explanations of the mythology,  and some timey wimey fun making it a great episode for new and old fans alike.

The 7th Doctor Passing the Torch. 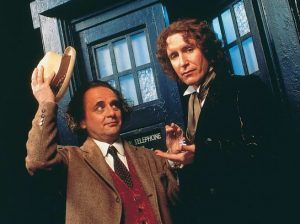 Doctor Who: The Movie was intended to be a backdoor pilot to a new series. Instead of rebooting the series, the producers made the wise choice of continuing on with the old canon. While it might not have served them well at the time it did allow fans to finally see Sylvester McCoy regeneration.  While his appearance is brief this is not a wink and a nod sort of cameo. It is a welcome addition that feels important to the story and the larger canon as a whole. It is also probably the most brutal and terrifying deaths of any of the Doctors before or since.

The 8th Doctor and a Regeneration for a New Generation. 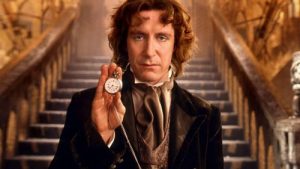 Unless you follow the Big Finish Audio productions (which you should) most aren’t familiar with the 8th Doctor. While he still carries the bravado and selflessness of the other Doctors, McGann’s Doctor is a little kinder and gentler. He is far witter and relaxed the most other incarnations, but also contains a childlike enthusiasm about the universe that is totally engrossing.

Reportedly  Tim Curry, Eric Idle, Billy Connolly, Trevor Eve, Michael Palin, and Jonathan Pryce. were among the early considerations for The Doctor, as well as future Doctors Christopher Eccleston and Peter Capaldi. As brilliant as all those choices are fortunately the role landed with Paul McGann.

McGann embuse the role with such a sense of enthusiasm and excitement that you want to go into the TARDIS if only to travel with him. Funnily enough, McGann has said in interviews that he had wanted to go the opposite way with the Doctor. To give him a leather coat and make him edgier. The higher ups refused and told him that the doctor was supposed to be “soft.” McGann has remarked, in jest, that he was annoyed when Eccleston got that part in the 2005 reboot and got to do exactly that.

As it is a regeneration episode McGann spends much of the time finding out who he is. The Doctor is suffering from a bit of amnesia from a nearly botched regeneration. This combined with the companions allows for some surprisingly natural expositional dialogue. What sets it apart from other regeneration episodes is that McGann and the writers have a clear sense of who The Doctor is. So even when he doesn’t know who he is, everything he does is filled with undeniable Doctorness. He might not know who he is, but McGann makes certain that the audience does.

There are two essential companions here, both of which serve to move the plot along and rarely get to become characters in their own right. Yet, just enough character development is used to keep them interesting. 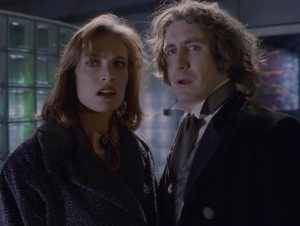 Grace Holloway is an opera loving doctor who. Her love of opera and her knowledge of the human body allows from some wonderful bits of dialogue from The Doctor. Grace is a bit of a damsel in distress towards the end but as a surgeon she’s not a stupid one.  She is one of the smarter human companions the doctor has encountered over the years. Her cleverness is an asset to The Doctor as he works to regain his memories. 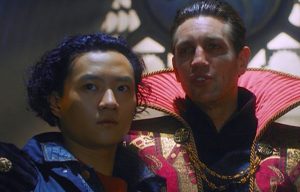 crime syndicate and goes on the run. As a criminal with a heart of gold Lee makes a far more interesting companion than most. The Doctor has always had an ambiguity concerning certain criminals. He’s never taken issue with being friends of con-men and thieves as he’s often resorted to both. Unfortunately Lee spends much of the episode as the Masters puppet/patsy. But he’s resourceful, charming, and clever nonetheless. If there was ever a companion who deserved more time in the TARDIS it’s lee.  However, it is unlikely that any substantial appearance by either character will occur due to their films rights remaining at Universal Pictures. 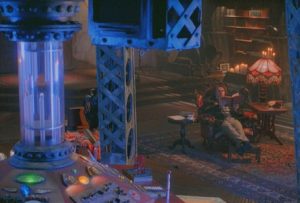 I may be biased as McGann is “my doctor” but this is simply the best TARDIS in the entirety of the show. There is a H.G Well/steampunk, aesthetic to the console room that makes sense. There are comfy chairs, the old hat rack and carpeting. It looks more like a private library – fused with a  factory – with a Dickensian twist. It embodied the quirkiness and almost foppish intellectual approach that makes the Doctor an interesting protagonist compared to other more macho sci-fi/fantasy heroes. 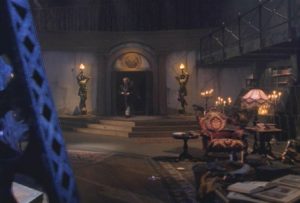 The episode makes some wonderful references to the old series, but best of all is making the TARDIS interior a central to the plot. Not only does it stick with the aesthetics of the cloister room from season 15, it expands upon it greatly (though not, arguably, successfully.) 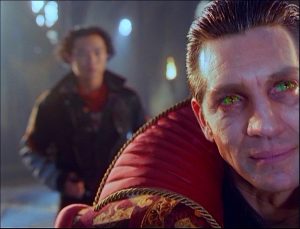 The opening reveals that The Master is at the end of it 13 lives and his death sentence is carried out on Skaro. The Master’s final request is that his remains are taken back to Gallifrey by the Doctor. On the trip The Masters essence escapes and takes over the body of  of a New York ambulance driver living in San Francisco (played by Eric Roberts.) Roberts chews on every single line he’s given. It is a wonderful throw back to Roger Delgado’s iteration of the character. It can be a bit grating at times, but it’s a bit of good campy fun. The Master’s plan is simple enough, to use the Eye of harmony to steal the doctors remaining lives. The process however, would rip Earth apart.

The Plot and New Years Eve.

The Master’s plan is not one of the best plots in the shows 50 plus years of history. Yet, it does provide the show lots of opportunities to explore years of mythology in a rather concise manner.  While amnesia is a rather tired trope of fiction, it’s use here is fun. The Doctors discussions with Grace as bits and pieces of his life come back to him feels natural and is interesting. The story hits all the right marks of a good Doctor Who story. Bits of time travel, Earth in threat of being torn from time-space, a ticking clock, characters with equal parts bravery and compassion, and a dash of campy fun sprinkled around for good measure.

At the time of it’s airing, there was sense of urgency and importance about 1999.  Moving to the new millennium had a very futuristic feel to it. That awe and excitement doesn’t translate well into later viewings. But it still makes for a great holiday episode as the countdown to the New Year is a rather important plot device.

Syncing your New Years Countdown with Doctor Who: The Movie 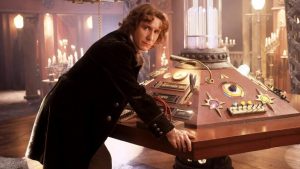 This is also pretty much the end of the episode. So it’s a perfect time to get up and bang pots and pans, or do a little dance with your dog, or hug/kiss/ toast a loved one – or whatever weird little thing you may do at midnight on New Years Eve.

It is a shame that we are unlikely to get more onscreen McGann. The TV movie and the equally wonderful Night of the Doctor are real  gems. The 8th Doctor and his adventures are truly and utterly brilliant additions to the franchise history. I love my Christmas Who tradition but I am excited for more New Years stories.

That said, I hope we don’t lose the Christmas Who tradition entirely. But I am open to more New Year’s Eve episodes in the future. So go and enjoy your holiday with The Doctor.

Happy New Years folks and we will see you in 2021. 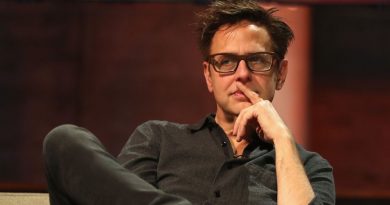 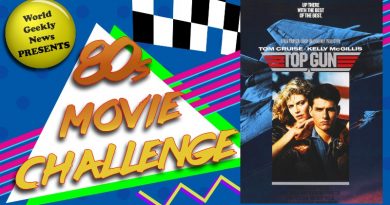