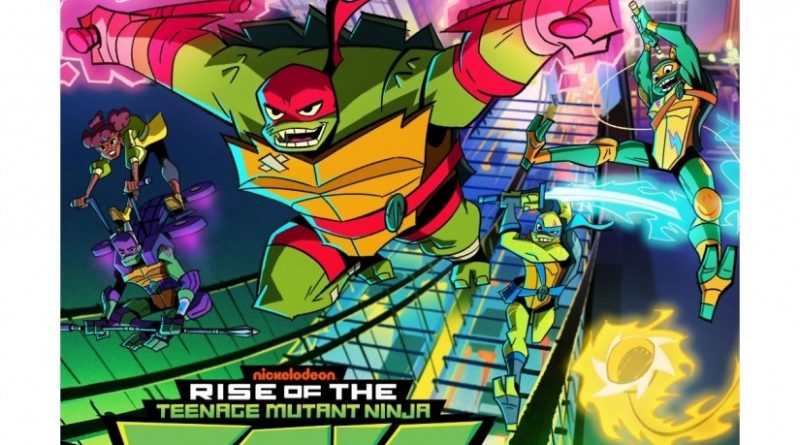 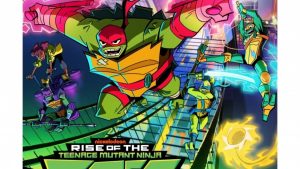 Rise of the Teenage Mutant Turtle arrives with no small amount of controversy amongst the fan base. For better or worse the show embraces it.  The result is a mixed bag that is arguably more good than bad.

Right off the bat, the first episode Mystic Mayhem hits you with just how different this show is. This is unashamedly being aimed at a much younger audience than the 2012 series. But, that doesn’t mean that adults won’t find things to enjoy as well.

The previous series, Teenage Mutant Ninja Turtles (2012) was a big hit with us at WGN. And rightly so.  With its slower pacing, well plotted series arcs and, at times, darker themes it had a lot of cross-generational appeal. Older fans (such as this 35 year old writer) could appreciate the writing while it  simultaneously built up a whole new generation of turtle crazy youngsters. So it’s no wonder then that coming straight from that series to this – everything seems so jarring. But, only a few minutes in you realise that that’s not necessarily a bad thing.

In the preview images and material released by Nickelodeon one of the main concerns was that the animation. It was very flat and solely 2D with a very (to put it politely) distinct style. Watching it in the context of the whole show it works well. This is a very modern series with a very modern look. The colours are bright and jab at your senses. The proportions are often distorted and elongated. The opening shot of New York has a sort of fisheye lens effect that immediately sets the tone.  Of particular merit was the amount of expression and detail this style ultimately creates. The faces and the hypnotic glow that the various weapons illuminate with towards the end of the episode are really wonderful. 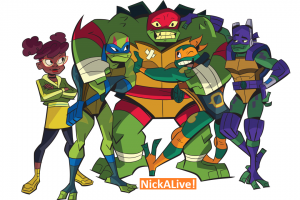 There is very little backstory  in the first episode. Instead we are plunged straight into the action with a good gag that subverts our expectations of the Turtles. The humour, in general, is very goofy and reminiscent of original 80s series. Which in my opinion is no bad thing. TMNT is a franchise that always was and should be a lot of fun. If you put yourself in that frame of mind then it is much better received. That said, the sarcastic banter between the four brothers will feel genuine and familiar to older viewers.

The personalities of our heroes are very different compared to what we’ve seen before. April (with Kat Graham putting in an excellent performance) is here presented as more feisty, fun and energetic than before. Her devotion to the turtles, nevertheless, remains a constant here.  Leonardo (Ben Schwartz, Parks and Rec) is now a bit more sure of himself and cocky, which we haven’t really seen before. Leo being my personal favourite Turtle – this will take some getting used to. Donatello (Josh Brener, Maron and Star Wars Resistance) is still the resident genius of the group but more of a smart ass this time around.  It gives his character a bit of edge it it and he gets some of the best lines of the show. Michelangelo (Disney regular  Brandon Mychal Smith) I found to be the least changed of these characters. He is still the wise cracking party guy. Lastly, Raphael ( Omar Benson Miller) is less angry than before and has a bit more of a goofy and funny appeal, mixing in a dash of Mikie’s personality. As has been widely reported, Raph is is now the leader of the Turtles. But, Leo is showing early signs of leadership capabilities such as occasional motivational talks to the group. This may point to where the dynamics of the team is heading.

The hardest change to swallow  for me was Splinter. Gone is the wizened old ninja master of old.  In Rise of TMNT Splinter is small, fat and lazy. He is portrayed more like a sitcom father figure. Splinter has always been a father figure to the Turtles, but this feels more direct. Raphael even addresses his as “pop” instead of “Master Splinter” There are signs that he may yet get more energetic showing off some Ninja skills but this was the biggest change for me that will take some getting used to. Splinters is excellently cast though with Eric Bauza providing the voice.

The Turtles, thankfully, sound like you would expect them to.  Funny and energetic, even with the changes they still feel like the Turtles we know and love.  There are voice actors to look forward to as well. Future episodes includes John Lydon (better known as Johnny Rotten of the Sex Pistols) playing a”power hungry” mutant pig called, quite brilliantly, ‘Meat Sweats’ and Game of Thrones’ Lena Headey as “Big Mama.”  Not to mention (even though that’s exactly what we’re doing) Rhys Darby, Tom Kinney, and modern master of cartoon voices Rob Paulson among others.

Not a Shred of Shredder

While the foot clan is scheduled to make an appearance there has been no mention of Shredder at all – on or off screen. Instead, we have been introduced to John Cena’s Baron Draxum.  Draxum is almost an amalgamation of several TMNT villains, part scientist, part interdimensional being, part warrior with some connection to Splinter’s past.

While these deviations will undoubtedly incite nerd-rage across the interwebs,  they are also refreshing. With six movies, at least three animated series, one live action show, and an ill advised concert series, there is a lot of well trodden ground in the franchises history.  The changes can be awkward but the result is exactly what you want in a reboot, something both fresh and familiar. 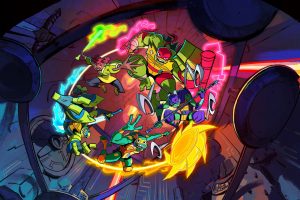 The show stumbles at parts, but as a first episode shows a lot of potential.  As mentioned previously there is no backstory given, there is a sense of possibilities and new ideas. Though this may be filled in with flashbacks later on we don’t know how April met the Turtles or even how the Turtles became the Turtles.

It was good to just gt straight into the action rather than going over old ground. As the title implies what is shown about the Turtles though is at this point they are bad at fighting and are yet to hone their skills through further training and experience. The new weapons are very cool, especially Donatello’s tech bow with a drone, which I thought was very in keeping with his character. Overall, I enjoyed it. Some of the changes were difficult to accept  as a lifelong fan. But, if the writers manage to find their footing this could be a really fun show.

Simon Stothard had to fight for the right to review this episode over editor KJ McDougall – both professing to be the bigger TMNT nerd. After Simon decidedly won the man-kini contest and KJ the pie eating portion of the competition – staff suggested a coin toss. (I believe their exact words were “Please god make it stop.”)  When he’s not watching kids cartoons and drawing inappropriate picture of men’s naughty bits on the bathroom stall he’s….well we aren’t exactly sure what he’s up to. He just kind of showed up one day in the brake room. But boy oh boy, aren’t we glad he did.

Star Wars: Resistance – What We Know So Far….