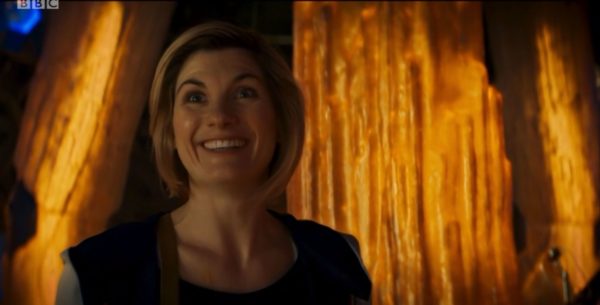 Last week Doctor Who returned to our screens and despite being a simple episode it reintroduced us to the new incarnation of The Doctor. The second episode, which is a direct sequel called The Ghost Monument, is a more complex episode that reintroduces us to The TARDIS.

Last Time on Doctor Who

We were left with the Doctor and her three ‘new best friends’ floating in space with no hope of rescue. But this is Doctor Who we’re talking about, not Game of Thrones. Already, within the first two episodes, we have a Doctor who isn’t a superhero. A Doctor who can’t save everyone, and who doesn’t have a rescue plan for every situation. This is quite refreshing. There are countless episodes when the Doctor, trapped in a situation is able to pull a plan from those bigger on the inside pockets.

But in the Ghost Monument, we have Jodie Whittaker trying to get by on her brains and whatever else she can find. They find themselves on a planet called Desolation, where the once thriving population are now dead and the world is a vast wasteland where everything can kill.

When I say everything, I mean everything. One of these threats is sentient bandages that also happen to be psychic. The reason I bring this one up is that we have hints at an overarching story. One bandage calls the Doctor ‘The Timeless Child’, and the Doctor’s reaction is that of shock. But the bandages are destroyed by a self-lighting alien cigar and an abundance of gas. Another potential story arc is the mention of the Stenza, Tim Shaw’s ‘Tooth Fairy Predator’ species from last week’s episode. Could they return in some way? 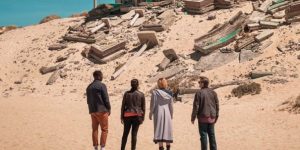 We have three guest stars in this episode. Ilin, played by Art Malik, is a Grandmaster in charge of the ‘Rally of the 12 Galaxies’, an intergalactic obstacle course. Angstrom (Susan Lynch) and Epzo (Shaun Dooley) are the two finalists of the race. They need to make their way across the world until they reach the Ghost monument.

The episode was entertaining and contrasted with the first showing that despite the small start, they’re not scared to go big. It reminded me of Planet of the Dead the 2009 10th Doctor special. I cannot fault the effects in this episode. The spaceships, the robots and the sentient bandages all look superb. It’s still amazing what the BBC budget can do. If we get episodes looking this good, I’ll accept we have to have makeup like the Tooth Fairy Predator. 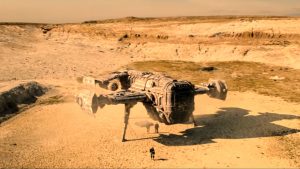 What is really enjoyable about this episode is that the Doctor doesn’t reach the TARDIS until the end. This isn’t a standard episode yet. The Doctor hasn’t been in control yet. She’s had to live by her nerve and brains. Again, I say this is refreshing. But next week we’re going to get our first proper adventure where The Doctor has her trusty TARDIS and Friends in tow.

For a second episode in the series, it felt as though they were showing us what they can do. It felt like after the safe, Earth-based episode, easing us into the new show, they wanted to show us that there is a whole universe to play with.

The Companions Yasmin (Mandip Gill), Ryan (Tosin Cole) and Graham (Bradley Walsh) seem to be handling themselves well. Yaz, seemed to be the weakest link in this episode, not really given anything to do. The focus seemed to be on Ryan and Graham and their relationship. 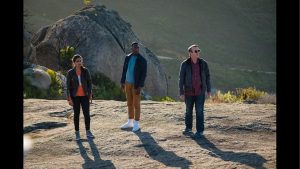 They do feel different to what has gone before and seem to be just normal people. I like the dynamic as well. They’re not running away from a humdrum life, they’ve been taken away accidentally. It’s different, and even though I’m not 100% behind Bradley Walsh, I do think he will appeal to a lot of people.

We discover early on that the Ghost Monument is, in fact, The TARDIS. This episode introduces us to the new TARDIS and despite seeming old, with my lad proclaiming the sign being from an old version. The inside is all new. With crystalline pillars feeding into the central console, it looks good. But as this is the first viewing of it, we will need to see what it’s like when in flight. 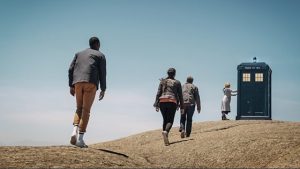 That wasn’t all that was new; there was a new title sequence, which appeared to be a cluster of space and time, in what looks to be a representation of the Big Bang. It looked new and fresh, and with the updated theme tune it appears to link the old and new. Watch below.

All in all, the Ghost Monument was entertaining, fast-paced and completely different to the first episode. It went a long way to show what this series will be like, and already I’m hooked. 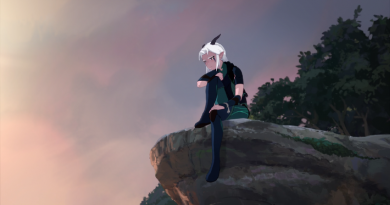 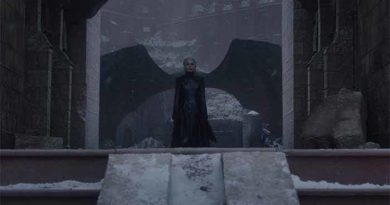 One thought on “Doctor Who: The Ghost Monument – Review”