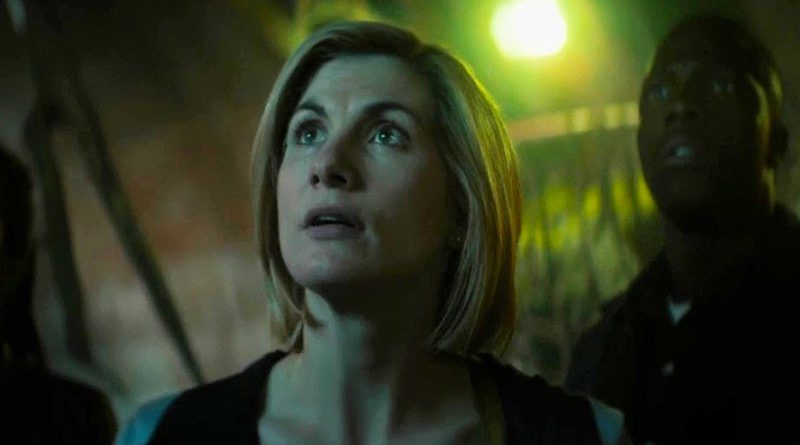 Doctor Who Season 11 has come to a close and we finally get our sequel episode that I’ve been wanting for a while. This week we see the return of Tim Shaw, the Tooth Fairy Predator as he is now a god in The Battle of Ranskoor Av Kolos. With some heavy potential Dalek intimations we may have an idea what the Christ…. Sorry, New Year’s episode may be. Also, news has fallen that Series 12 will not air until 2020.

But don’t let that dampen your spirits, or shoes as the Doctor states, you should have brought wellies. The episode starts strong and moves forward competently. I feel this is the best of Chibnall’s writing to date. I’m including everything he has ever written for Doctor Who as well! I didn’t like Tim Shaw in the first episode of the series, but I do like how he has been used.

Tim Shaw was the main antagonist of episode one. Not a great antagonist, but he had a purpose. He was hunting a human because that’s what he does. Thwarted by the Doctor he transported away, The Doctor believing he went home, but he landed on a planet with powerful aliens who are planet shifting air benders!

Timmy has been sent back over 3407 years to a planet with only two people on it. He makes them believe he is a god and uses their immense power to steal whole planets out of the sky, putting Davros to shame! He is weakened to the point he needs a massive breathing apparatus, until he doesn’t, but even though he trots off like he’s a spry 2500 year old, he is beaten by the duo of Graham and Ryan.

At the very beginning I wasn’t a fan of Bradley Walsh’s casting. But he has proven himself to be an adept actor, who is quite integral to the role. Even when he hasn’t got anything to do he doesn’t seem out of place. Here we see him going out for revenge at the death of Grace. He warns the Doctor that he will kill Timmy Shaw, and even when she tries to make him stay in the TARDIS, he refuses. He is out for blood and Walsh’s acting makes you believe it.

I still believe there are too many people in the TARDIS, for the amount of episodes and runtime there is. Poor Yaz again gets nothing much to do. But at least there was a sense of danger. Having this many people in the TARDIS means there is always a threat that someone will die, and this episode proved that each companion could have been up for the chop.

Mark Addy Guest stars as the commander of a ship whose crew has fallen victim to Tim Shaw. He saves the Doctor and her Fam (seriously, they’re pushing this) a couple of times and out of the guest stars this series, he seems to stand out a little more than most.

The story is a nice second part and closer to the first episode and the wait actually gives it a sense of time passing. The Doctor is more comfortable with herself, the companion dynamic has grown and flourished, and now we get to go back to where it started.

In an attempt to continue his collection of prey, Tzim-Sha, has utilised the Ux, a powerful alien race to take whole planets and place them in a crystal. The fifth planet he wants is Earth, as usual.

So it’s down to the Doctor to try and persuade the Ux to send all the planets back before they rip a hole in the fabric of reality. Overall the story is entertaining. It gives us a sense of urgency, which at points has been lacking in this series.

Jodie Whittaker is the Doctor. I’m not trying to be hyperbolic, I truly mean that. It has taken a while. She has had moments throughout the series, but this episode in particular had her running around and sorting stuff the way the Doctor usually does. She seems extremely confident here, and even though we’ve gone back to the self-referential lines of Tennant’s Doctor, the odd joke falling down, and the convenient remote control TARDIS. The final confrontation can stand up with other Doctor moments from the past twelve incarnations.

The Battle of Ranskoor Av Kolos is possible the best episode to date. I have already said that this is Chibnall’s best episode ever, in my opinion. It has tension, laughs, and a solid plot. It’s a shame that the premise of Earth being moved has been done before, so it wasn’t really that new. So the Doctor hung a lantern and made reference to the last time she had to put the Earth back, During the events of Journey’s End.

The series has been connected through the characters. Instead of linking episodes using the villains, we have just had the same characters developing through the adventures. It’s been a long time coming, but the finale felt low-key, without having a Deus Ex Machina. There was no magical companion coming in to save the day this time and the episode felt better for it. Each character played a role, (some more than others) and they were separated to fulfil their own story arcs.

Series 11 has been a truly entertaining series, which has gone in very different directions with each episode. It’s a shame that we won’t be getting a new series until 2020. I’m not sure why this is, but I’ll admit it stinks. I hope the long wait doesn’t cut into Whittaker’s time behind the TARDIS controls.

Thank you so much for reading my rambling reviews, I really appreciate it. You can look back through the articles here. Make sure you check out our daily Film Advent Calendar on the run up to Christmas. Also, Subscribe! See you in the New Year.

Everything We Know About The Mandalorian