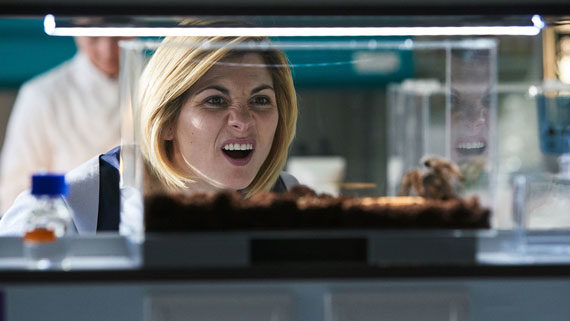 Doctor Who has had a history with gross alien looking things in the past. This week’s episode is no different. Returning Team TARDIS back to Sheffield, it seems as though all is well. But either someone had neglected to do the dusting, or there are ‘Arachnids in the UK’! (Have you ever seen a better opening paragraph?)

This series has had a complete makeover. A kind of semi-reboot of the now 55 year old show. I have to say, I’m liking it so far. We get our first new look at the updated time vortex and visually it looks stunning. Giving us a more detailed star filled wormhole the likes of Interstellar. At the same time it evoked memories of the Bill and Ted’s time/phone lines with different junctions. It looks superb.

Then we arrive back in Sheffield and there’s an emotional goodbye with the Doctor not really wanting to go off on her own. I do like this, as it appears she has gone back to not wanting to be alone, whereas we’ve had Tennant and Capaldi opting to travel alone at points. The Doctor jumps at the chance to go for tea at Yaz’s, and luckily for the people of Sheffield, she did.

Chris Noth plays the somewhat evil Jack Robertson, an anti-Trump Trump-like character. He’s a businessman and hotelier whom has his fingers in many pies, and potentially will be the in-universe president at some future point. He owns a hotel that seems to be at the centre of a web of strange goings on. Spiders are acting differently, mysterious waste products are littered around the estate, and Yaz’s neighbour hasn’t been seen for days. 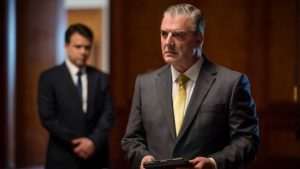 It is discovered in a fairly gruesome way that giant spiders are running amok. The visuals and effects of the spiders are extremely well done. More than once my 9 year old gave a verbal gasp.

I myself haven’t been this uncomfortable since Shelob emerged from her cave to attack poor Frodo, back in 2003. They were very photo realistic and enough to make your skin crawl.

This episode had everything. Humour, excitement, scares and a villain who you expect to get his comeuppance at the pincer end of a spider, but doesn’t. I was reminded (thanks Paul) of the Christmas Episode Voyage of the Damned where Rickston Slade a vile businessman not only lives at the end, but makes a profit due to the disaster.

It was good to see the companion’s family again. Something we haven’t seen since Clara, and something we haven’t seen done well since Rose’s family. But the stand out performance in this episode I think has to go to Bradley Walsh as the grieving husband, who hasn’t had time to grieve. He is separated from the rest as he wants to go home. He only comes back to the main group when he discovers the discarded skin of a large spider in the attic. I only realised spiders do this recently, as is I needed another reason to hate them! 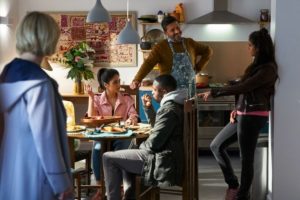 There’s a nice moment when it looks like Ryan will finally address how he feels about his step-granddad, but I feel they’re going to prolong this, maybe to the point where we say goodbye to Walsh’s Graham for the last time! What is good about this is it’s nice to be able to talk about the companions, as their backstories have been fleshed out. We want to see the budding relationship between Yaz and Ryan to grow, whilst wanting Ryan call Graham, Granddad. All this makes compelling TV, and that’s before we even delve into the Doctor and her timeless child questions. 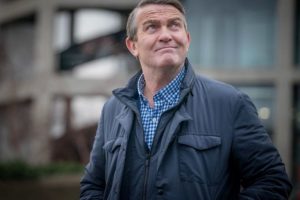 This series has been getting better and better for me. Everything about it seems fresh and new. It has heart and occasionally hits those emotional beats that only a good drama knows how to do. The new VFX Company charged with bringing monsters to life for Doctor Who, DNEG have been able to give us oversized spiders that look and feel real.

I’ll admit I was expecting a Doctor quip about not liking spiders, especially after Jon Pertwee’s Third Doctor was killed by one!

What did you think of the episode? Were you as creeped out as me? Let us know in the comments. You can read the review of last week’s episode Rosa here.

Reopening The X-Files – The Blessing Way 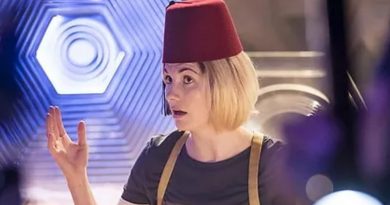 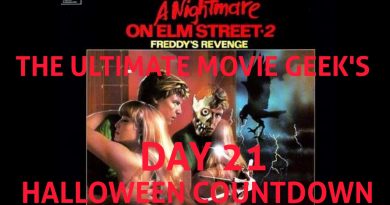 2 thoughts on “Doctor Who – Arachnids in the UK – Review”