Before Season 4 starts this December Amazon Prime Video has renewed sci-fi series The Expanse for a fifth season.

There’s still work to be done. #CityOnAHill will return for Season 2 on #Showtime!

Cable channel FX has renewed crime drama series Snowfall for a fourth season. The series is set in 1980s Los Angeles, California and follows the first crack epidemic and its influence on the city.

Can’t stop, won’t stop. #SnowfallFX is coming back for Season 4.

Talking about FX series, the cable channel has also renewed comedic drama starring Donald Glover (Community) Atlanta for a fourth season. It follows Glover working in the Atlanta, Georgia rap music scene. The news comes quite early, as Season 3 will start production coming Spring. Production of Season 4 will be added to it. Both seasons will have eight episodes.

Post-apocalyptic teen drama sci-fi series The 100 will come to an end on The CW next season after seven seasons and 100 episodes.

Netflix has cancelled the mysterious sci-fi series The OA after two seasons. The series about a missing blind girl returning with her sight restored ran for 16 episodes in total.

Also ending at Netflix, but a natural end, is suicide drama 13 Reasons Why. Season 4 has been confirmed to be the last one.

At FX comedy series Baskets will also come to an end after four seasons. The series starring Zach Galifianakis (The Hangover) and who co-created the series with comedian Louis C.K and showrunner Jonathan Krisel (Portlandia). The Season 4 finale will air on Thursday, August 22.

Deadline knows that upcoming American streaming service HBO Max has given a first season of eight episodes order for Circe. Rick Jaffa and Amanda Silver (Jurassic World, Dawn of and War for the Planet of the Apes) will write and executive produce Madeline Miller’s 2018 novel. The story is a modern take on Greek mythology from the perspective of goddess of magic Circe following her transformation of an awkward nymph to a formidable witch.

American streaming service CBS All Access has ordered a TV adaption of Walter Tevis 1976 sci-fi novel The Man Who Fell To Earth. The story about an alien arriving on Earth at a pivotal moment in human evolution and who has to confront his past to determine humankind’s future was adapted to film in 1976, directed by Nicolas Roeg (The Witches) and starring David Bowie (Labyrinth). The new adaption will be written, directed and executive produced by Alex Kurtzman (Star Trek: Discovery). He will also be co-showrunner with Jenny Lumet (The Mummy (2017)) and John Hlavin (Blood Drive). Here is a trailer for the 1976 movie to get a taste…

Deadline knows that Netflix has picked up a 10-episode first season of Tiny Pretty Things. The teen drama series is based on the 2015 novel by Sona Charaipotra and Dhonielle Clayton of the same name. Michael MacLennan (Bomb Girls) will adapt the story of teen enrolled at the Chicago Archer School of Ballet and their struggles being far away from home and being selected for the City Works Ballet, the city’s renowned professional dance company.

While we are still waiting on news about a potential third season of Freeform’s Marvel’s Cloak and Dagger, we do now know that that series will crossover with Hulu’s Marvel’s Runaways in its third season, which is released on Friday, December 13. Both series are set in the Marvel Cinematic Universe.

Viacom has acquired the rights to Paws, Inc., the company that in turn controls the U.S. Acres and Garfield characters, created by American cartoonist Jim Davis. With the news comes that Viacom-owned Nickelodeon started development of a Garfield TV series. Previously Garfield has been on TV in multiple specials and (CGI) animated TV series, as well as two theatrical live-action/animation hybrid movies with Bill Murray voicing the character.

Variety knows that Amazon Prime Video and Paramount Television are developing a TV adaption of 1997 sci-fi horror movie Event Horizon. Adam Wingard (Godzilla vs. Kong) is set to be executive producer and director of the upcoming series. Jeremy Platt (Hap and Leonard) and producers of the movie Larry Gordon and Lloyd Levin are also up for executive producing. Here is the trailer of the 1997 movie directed by Paul W. S. Anderson (Resident Evil) and written by Philip Eisner (Mutant Chronicles), to get a taste…

Sources tell The Hollywood Reporter that ABC is looking at the possibility of a spinoff series for comedy series Fresh of the Boat. The spinoff would follow an entirely new cast but would be following the same formula as the parent series.

Deadline reports that Game of Thrones creators David Benioff and D.B. Weiss have signed a nine-figure exclusive deal with Netflix to write, produce and direct future projects. The deal would be for a time of five years. Previously Shonda Rhimes (Grey’s Anatomy) and Ryan Murphy (American Horror Story) signed similar deals with the streaming giant. The deal does not mean the cancellation of already development project, such as the “delayed” alternative history/modern slavery HBO series Confederate and their upcoming Star Wars movies at Lucasfilm.

Netflix has released a teaser trailer for the second season of Mindhunter, which is released on Friday, August 16.

Amazon Prime Video has released a trailer for its immigration fantasy series Carnival Row, starring Orlando Bloom (The Lord of the Rings, The Hobbit) and Cara Delevingne (Suicide Squad). It has also already been renewed for a second season. The eight-episode first season is released on Friday, August 30.

FX has released a trailer for the second season of Mr Inbetween, an Australian-American black comedy co-production between FX and Foxtel. Season 2 starts on Thursday, September 12.

The BBC has released a trailer for the fifth series of crime drama Peaky Blinders. No release date has been given yet.

Netflix has finally given us a release date of the third season of British royal drama series The Crown. It is Sunday, November 17!

Amazon Prime Video has released a teaser trailer for the second season of spy thriller Tom Clancy’s Jack Ryan. No release date is known yet.

The CW has released an extended trailer for the third current Archie comics-based series Katy Keene. Spinning off from Riverdale it will put character Josie McCoy (Lucy Hale) in musical New York City. The series premieres early next year.

A teaser trailer has been released by AMC for the third The Walking Dead series, which will premiere in Spring of 2020. 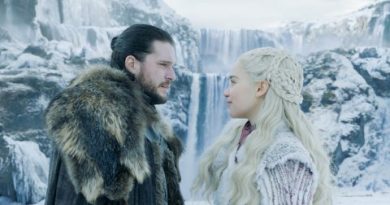