Premium channel Starz has ordered a second season of eight episodes of their period drama The Spanish Princess, the sequel miniseries to The White Queen and The White Princess. The series, about Spanish Princess Catherina of Aragon who is sent off to England to marry, is based upon Philippa Gregory’s 2005 novel The Constant Princess and 2014 novel The King’s Curse. The second season will conclude the story in eight episodes.

Supernatural BBC comedy series Ghosts, created and starring the minds behind Horrible Histories and Yonderland, has been renewed for a second series by the public broadcaster.

Also renewed by the BBC is the long-running Lee Mack comedy series Not Going Out. We can look forward to Series 11 to 13 in the coming years, as was revealed in The Graham Norton Show by Mack himself.

Netflix has renewed its saved from Fox cancellation supernatural series Lucifer, based upon the DC imprint Vertigo comic by Neil Gaiman (Good Omens), for a fifth and final season.

thanks to the lucifans, #lucifer's story will come to an end the way it should: the fifth and final season is coming to @netflix. pic.twitter.com/EvknS5AVHK

"Love, Death and Robots" will be back! Jennifer Yuh Nelson has joined as supervising director for Volume 2 and will oversee all episodes pic.twitter.com/8OVStMbpeP

Furthermore renewed by Netflix is dark comedy series Dead To Me. A second season starring Christina Applegate (Bad Moms) and Linda Cardellini (Avengers: Endgame) in an unlikely friendship that got quite the twist in the first season. 10 news episodes will be released in 2020.

Syfy has cancelled two of their comic book adaptions. Deadly Class, based upon the Image comic written by Rick Remender (Avengers: Rage of Ultron) and illustrated by Wesley Craig (Worlds’ Finest), has been cancelled after one season of ten episodes. Happy!, the holiday themed series based upon Grant Morrison (Klaus) and artist Darick Robertson’s (The Boys) Image comic, has been cancelled after two seasons and 18 episodes. Both series are being shopped to other outlets, but changes on a pickup are always slim.

Well, that was… quick. American streaming service DC Universe already cut the episode count of supernatural series from James Wan (Aquaman), Swamp Thing, from 13 to 10 episodes, but now it has been straight up cancelled. Its unclear why the series was exactly cancelled. At first there were reports that a bureaucratic error regarding tax credit from the State of North Carolina had a significant financial backfire for the series, but that has been disputed as the cause. There is also talk that WarnerMedia is reevaluating DC Universe, which would not be weird as they have another, more general streaming service coming up in which it could be folded into.

At an Emmy-panel The Good Place creator Michael Schur has said that the upcoming fourth season of the heavenly comedy will be the last one. Schur said the writing team mapped out the story when Season 2 was ordered and they felt that in about 50 episodes the story would have been told.

At the ATX TV Festival The Red Line executive producer Sunil Nayar confirmed that eight episodes will be it for the limited series. This does not come as much of a surprise as it was more of a miniseries anyway.

According to TVLine Netflix’s comedy series The Ranch will come to an end with Season 4. The comedy starring Ashton Kutcher (Two and a Half Men), Sam Elliott (The Man Who Killed Hitler and Then the Big Foot) and Debra Winger (Terms of Endearment) will have 20 new episodes coming up, split into a “Part 7” and “Part 8.”

HBO has confirmed that tech comedy series Silicon Valley will come to an end with Season 6. The series hit a bit a delay, as co-showrunner Alec Berg also is showrunner on other HBO comedy Barry.

Netflix, Universal, Amblin Entertainment and DreamWorks Animation have officially announced Jurassic World: Camp Cretaceous. The 3D animated series, set during the events of the 2015 movie Jurassic World, follows a group of teenage kids that have won a camping trip on Isla Nublar only for the disastrous events to happen from the movie. The series will be released on Netflix sometime in 2020. Meanwhile, there remains the question what the live action Jurassic World: Battle at Big Rock is…

HUGE ANNOUNCEMENT TIME: Netflix and Wizards of the Coast are teaming up with Joe and Anthony Russo to make a Magic: The Gathering anime series and this teaser of Chandra has me asking QUESTIONS. pic.twitter.com/vljlEtl0Mq

Nickelodeon has ordered a first season of 13 episodes of Kamp Koral, a prequel spin-off to their long running hit 2D animated series SpongeBob SquarePants. The series will follow a 10-year-old SpongeBob and his friends at a Summer at the titular camp sitting around campfires, catching jellyfish and swimming in Lake Yuckymuck. Unlike the parent series the prequel will be 3D animated.

The upcoming streaming service from WarnerMedia has ordered a 10-episode first season of Tokyo Vice, based upon Jake Adelstein’s 2009 memoire Tokyo Vice: An American Reporter on the Police Beat in Japan. The series will be written by Tony Award winning playwright J.T. Rogers (Oslo) and will star Ansel Elgort (Baby Driver).

Director Denis Villaneuve’s (Blade Runner 2049) movie adaption of Frank Herbert’s sci-fi novel series Dune has yet to come out next year, but WarnerMedia seems confident in the project. So much in fact that they have ordered a first season of a TV series spinoff called Dune: The Sisterhood for its upcoming streaming service. The series will follow the Bene Gesserit, a mysterious order of women, hence the title of the series. Denis Villaneuve will at least direct the pilot episode and will serve as executive producer.

American streaming service Hulu has ordered a eight episode first season adaption of John Green’s 2005 novel Looking for Alaska. The series follows a teenage boy who starts attending a boarding school and befriends a girl named Alaska. Then he and a group of friends have to deal with a tragedy.

According to Deadline Ron Howard and Brian Grazer’s Imagine Television Studios, CBS TV Studios and Universal Television are developing a series based upon Dan Brown’s 2009 novel The Lost Symbol. The TV series would be a prequel to the Tom Hanks as Professor Robert Langdon starring movies The Da Vinci Code, Angels & Demons and Inferno. In the novel’s chronology Angels & Demons comes first, then The Da Vinci Code, followed by The Lost Symbol, Inferno and Origin. The Lost Symbol tells a story about Langdon in Washington, D.C. and the Freemasonry in the capitol of the United States.

Co-created Lee Daniels promises closure for the cancelled Fox musical drama Star. While nothing concrete has been said, it is possible Star gets a conclusion on fellow Fox musical series and Daniels creation Empire, with which is has crossed over before. It would also not be the first time a series got a conclusion this way on Fox, as both Millennium and The Lone Gunmen got one in The X-Files.

Those with access to American internet can watch the first episode of Showtime’s new Kevin Bacon police drama City On A Hill for free!

Netflix has released a trailer for the third season of Marvel’s Jessica Jones, also the final season of any Marvel/Netflix series. Jessica will this time come into conflict with Gregory Salinger who in the comics is known as “Foolkiller.” Netflix promotes this third season, which releases on Friday, June 14, as “the final season,” but we all know better than that at this point.

On Friday, July 19 Netflix will release “Part 3” of its Spanish Original Series La Cada del Papel or The Money Heist.

Netflix also released a couple of trailers for the second Staffel of its German mystery Original Series Dark, which is released on Friday, June 21.

A teaser trailer has been released for the fifth and final season of Syfy’s bounty hunter sci-fi series Killjoys, which starts on Friday, July 19.

Amazon Prime Video has released a short teaser of fantasy series Carnival Row. The series is set in a fantasy version of Victorian Britain and tells the story of growing tensions between humans and an influx of more magical beings among them. The whole eight episode first season, starring Orlando Bloom (The Lord of the Rings) and Cara Delevingne (Pan), is released on Friday, August 30.

A trailer for alternative history space race series For All Mankind, coming to upcoming streaming service Apple TV+, has been released. Coming from Ronald D. Moore (Battlestar Galactica) the series asks the question what would have happened if not the USA but the USSR landed on the Moon first. No release date has been given, but it would make sense if it launches with Apple TV+ somewhere in the Autumn. 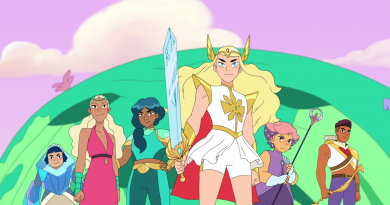 She Ra and The Princesses of Power – Season 2 Review