Female wrestling drama series Glow will return for a fourth and final season on Netflix!

All good things must come to a GLOWing end. We're coming back for a fourth and final season!

Showtime has renewed its dark comedy On Becoming a God in Central Florida, starring Kirsten Dunst (Spider-Man, Jumanji), for a second season. The series is about a young mother who works as a water park employee but makes her way up the ladder at a marketing firm.

— On Becoming A God in Central Florida on Showtime (@SHOBecomingAGod) September 26, 2019

ABC in development Bermuda Triangle series called… Well, Triangle, has been cancelled, Deadline says. The series from Jon Feldman (Blood & Oil) and Sonny Postiglione (Life On Mars (US)) was to star a cast of characters that would be stuck on an island in the Triangle with other shipwrecked people from throughout history.

Announced barely half a year ago but now cancelled is Hulu’s Marvel series Ghost Rider, Deadline knows. Gabriel Luna (Terminator: Dark Fate) was set to reprise his role as Ghost Rider Robbie Reyes from Agents of S.H.I.E.L.D., but a “creative impasse” has spoiled that. If the series could be revived is anyone’s guess, but Hulu does still have a new season of Runaways coming and is still developing eyed Ghost Rider companion series Helstrom. Next to that, a host of shared universe Marvel animated series are coming to Hulu.

It seems like Freeform (formally ABC Family) has a hard time reproducing the success of Pretty Little Liars. After supernatural spin-off Ravenswood did not hold out longer than one season in 2014 the second spin-off, Pretty Little Liars: The Perfectionists, now also bit the dust after one season. The sleuth spin-off was also based on a novel series, of currently two novels, by Sara Shepard. Sasha Pieterse and Janel Parrish made the jump to the sequel spin-off from the parent series.

Upcoming streaming service HBO Max has picked up the reboot of the Adult Swim animated series The Boondocks. Two 12-episode seasons and a 50-minute special, which is set for release in the Autumn of 2020, have been ordered. Next to that, the complete original series will stream on the service from Spring 2020 onwards. Here’s a trailer from the original series to get a taste.

HBO Max also hooked Ellen DeGeneres for four series to launch in 2020. Little Ellen is a 2D animated program for kids following seven-year-old Ellen in her home town of New Orleans. Ellen’s Home Design Challenge is a… well, home design challenge reality series. First Dates Hotel is based on the British dating show format having couples have their first date in… well, a hotel. Finding Einstein is a documentary series with the support of the Einstein estate that seeks out and celebrates new “Einsteins”.

Fox has picked up a remake of BBC comedy series Miranda, called Carla. Starring Mayim Bialik (The Big Bang Theory) in the titular role of a woman who tries to live her life even if about everyone tries to get involved with it. Bialik executive produces together with fellow The Big Bang Theory star Jim Parsons. Darlene Hunt (The Big C) will write the pilot. Here is a promo of the BBC original starring Miranda Hart (Call the Midwife), Sarah Hadland (Horrible Histories: The Movie) and Tom Ellis (Lucifer)

NBCUniversal has presented their upcoming streaming service as Peacock, a reference to the logo of NBC, which called “the peacock network” because of it. The service will launch in April of 2020. Next to exclusively streaming NBCUniversal productions, like Parks and Recreation and The Office (US), there will be originals. Well, originals, there are quite a number of reboots and revivals here. Sam Esmail (Mr. Robot) is developing a series set “within the mythology” of Ronald D. Moore’s Battlestar Galactica reboot. Comedy series Saved By the Bell is revived with a share of its original cast members. Also revived is comedy series Punky Brewster with Soleil Moon Fry returning in the titular role. Highschool comedy A.P. Bio was cancelled but is revived for a third season. The second Psych TV movie was in development for NBCUniversal owned USA Network, but is now moved to Peacock. The same goes for the for also NBCUniversal owned Bravo’s Queer As Folk reboot. New drama comes an adaption of Aldous Huxley dystopian novel A Brave New World, starring Alden Ehrenreich (Solo: A Star Wars Story) and Demi Moore (Ghost). Jamie Dornan (Fifty Shades of Grey), Alec Baldwin (Mission: Impossible – Fallout) and Christian Slater (Mr. Robot) will star in the podcast adaption Dr. Death, about a horror surgeon. Ed Helms (The Hangover) will star in comedy series Rutherford Falls. Emmy Rossum (Shameless) will star in pop culture icon drama, Angelyne.

BSG fans, this will NOT be a remake of the amazing series @RonDMoore launched because… why mess with perfection? Instead, we’ll explore a new story within the mythology while staying true to the spirit of Battlestar. So say we all!

Supernatural is going to end after no less than 15 seasons. What is next for its leads? Well, according to Deadline, Jared Padalecki already has something cooking with starring and executive producing a reboot of Walker, Texas Ranger. The series about a member of the elite law enforcement unit, of course, starred Chuck Norris for eight seasons on CBS in the 90s. Anna Fricke (Valor) is writing the pilot episode. No outlet has been attached yet, but CBS could again be the one.

It might be the end for The CW’s Arrow after eight seasons, but the DC shared TV universe it started keeps carrying on. According to TVLine a spin-off is in the works based upon the “Star City 2040” flash-forwards seen in Arrow Season 7 and 8. Canaries Katie Cassidy Rodgers, Juliana Harkavy and Katherine McNamara are all said to star in the series, with the latter maybe picking up the Green Arrow bow and hood.

MGM Television is developing anthology series Scenes From an Italian Restaurant, based upon Billy Joel songs, The Hollywood Reporter knows. Each episode will be based upon Joel’s song lyrics, such as “Piano Man”, “The Stranger” and “Sgt. O’Leary”. Kevin Fox (Law & Order: Special Victims Unit) is leading the development of the series and will be executive producer next to Steve Cohen (Billy Joel: New York State of Mind) and Billy Joel himself. No outlet is currently attached.

Andrew Scott (Fleabag, Sherlock) has been cast as the lead in an adaptation of Patricia Highsmith’s Tom Ripley novels by Showtime and Steven Zaillian (The Night Of). Ripley will follow 1960s New York City grifter Tom Ripley who is hired to retrieve the son of a rich man from Italy, which is the start of deceit, fraud and murder. Highsmith’s novels were adapted before, like in 1999’s Matt Damon starring The Talented Mr. Ripley. Here’s a trailer from that movie to get a taste.

A trailer for the fourth season of Netflix’s animated puberty comedy series Big Mouth has been released. Season 4 is released on Friday, October 4.

The CW released a trailer for the fifth season of Supergirl. Episode 1 airs Sunday, October 6.

Also released by The CW was a trailer for Season 3 of Black Lightning which starts Monday, October 7.

The Flash starts its sixth season on The CW on Tuesday, October 8 and got a trailer for it.

Furthermore the eighth and final season of Arrow got a trailer. The end begins on Tuesday, October 15.

Supernatural will start the finish of its epic 15 season run on The CW on Thursday, October 10.

Netflix has released a trailer for El Camino: A Breaking Bad Movie! Which will release on Friday, October 11.

On Thursday, October 24 Netflix will release Ferris Bueller-like horror-comedy Daybreak (and it does have Bueller himself, Matthew Broderick, in it too!). Here is a trailer.

And on Friday, October 25 Netflix will release the first half of the sixth and final season of 2D animated comedy series BoJack Horseman. The second batch will be released on Friday, January 31.

More from Apple TV+ for the kids is puppet series Helpsters, which also starts on Friday, November 1.

Apple TV+ also released a trailer for its first of a host of Peanuts material, Snoopy in Space. It will also be released on Friday, November 1.

Furthermore, Apple TV+ gave us another trailer for alternate history space race series For All Mankind, which, you guessed it, starts on Friday, November 1.

Netflix has released a teaser for the long-awaited third season of Queen Elizabeth II biographic series The Crown, which will release on Sunday, November 17.

Showtime has released a trailer for the seventh season of Ray Donovan, premiering on Sunday, November 17. 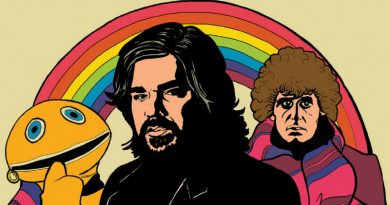