Welcome to the weekly TV news round-up, where we go into the latest TV news regarding renewals, cancellations, and pick-ups. This week we have a host of renewal, pilot, and some cancellation news. With a few trailers too.

US broadcasting network CBS has renewed comedy God Friended Me for a second season. The series follows a guy who seemingly gets befriended by God on social media.

US premium cable channel Showtime has renewed its dramatic comedy series Shameless, starring a cast led by William H. Macy (Jurassic Park III), for a tenth season. The series following the dysfunctional Gallagher family in Los Angeles is an American remake of the original UK series set in Manchester.

US broadcast network The CW has reloaded their renewal machine gun, renewing almost their complete line-up. Renewed are: Supernatural for a whopping 15th season(!), Arrow for a 8th season, The Flash for a 6th season; Supergirl, DC’s Legends of Tomorrow and Riverdale for a 4th season; Black Lightning and the Dynasty reboot for a 3th season, and finally The Vampire Diaries spin-off Legacies and the Charmed reboot for a second season. Current series that have not yet been renewed or cancelled are All American, Roswell, New Mexico, and The 100. iZombie, Crazy Ex-Girlfriend, and Jane the Virgin are currently in their final seasons.

Netflix has renewed the sequel series to Full House, Fuller House for a fifth and final season. The Fuller family will have 18 episodes to bring their adventures to an end, this Autumn.

Netflix also renewed comedic drama Sex Education for an eight-episode second season. The series stars Asa Butterfield (Ender’s Game) as a socially awkward teen who may climb up the social ladder at his school using the knowledge of his mother Gillian Anderson (The X-Files), who is a sex therapist.

US cable channel IFC has cancelled supernatural comedy Stan Against Evil after three seasons. John C. McGinley (Scrubs) starred as the titular Stan, a former sheriff of a small New Hampshire town build on the site of a mass witch burning. Stan teams up with the current sheriff, Evie (Janet Varney), when the town is invaded by all kinds of supernatural creatures.

Netflix has cancelled time travel drama Travelers after three seasons. Originally a production of Canadian broadcaster Showcase, Netflix took in the series production for its third season, after having handled the international distribution for the first two.

Thanks to the greatest cast, crew, directors, writers, artists and producing partners a guy could ask for. Love to you all. And to @Netflix for stepping up so we could make season 3! @Carrie_Mudd @EricMcCormack @TRVLRSseries #bestfansever

Showtime has officially ordered a revival of lesbian-themed drama series The L World. Jennifer Beals, Katherine Moennig, and Leisha Hailey will all be back to reprise their roles from the original series, which ran for six seasons between 2004 and 2009. The new series will follow “a new generation of self-possessed LGBTQIA characters experiencing love, heartbreak, sex, setbacks and success in Los Angeles.” The eight-episode seventh season will air later in 2019.

US streaming service CBS All Access has ordered a 10-episode limited series adaption of Stephen King’s epic The Stand. The story is set in a world like our own but is devastated by the Captain Trips virus, which reduced the human race with 99%. The survivors now have to deal with rebuilding civilization. Two groups form in the United States, those led by the elderly Mother Abagail and those led by Randall Flagg. Those who (also) have read King’s magnum opus The Dark Tower or seen the recent movie adaption, will know the latter of the two is not good news. Josh Boone (The New Mutants), who has been busy trying to make a new adaption happen for years now, will direct and write together with Ben Cavell (SEAL Team). A release date is currently not known.

Upcoming streaming service Disney+ has ordered a new series, and it is not a Star Wars or Marvel based one. No, it is a new drama series from Ilana Peña (Crazy Ex-Girlfriend) called Diary of a Female President. The series will follow the life of a Cuban-American girl, starting at age 12, who will become the future President of the United States. The first season will have ten episodes. No release date is currently known.

More news from Showtime, as Bryan Cranston (Breaking Bad) will star in Your Honor. A limited series from Robert and Michelle King (The Good Fight) and Peter Moffat (The Night Of), which follows a respected judge whose son is involved in a hit-and-run. Which follows is a legal thriller of lies, deceit and impossible choices in New Orleans. A premiere date is currently unknown.

Showtime’s president Gary Levine has announced at the Television Critics Association winter press tour that the eight and final season of spy thriller series Homeland, starring Claire Danes, will not premiere during the Summer but the Autumn.

The voice cast of streaming service Amazon Prime Video’s animated adaption of the Robert Kirkman’s comic Invincible has been announced. Those lending their voices are Steven Yeun (The Walking Dead), J.K. Simmons (Counterpart), Sandra Oh (Killing Eve), Seth Rogen (This Is the End), Gillian Jacobs (Community), Andrew Rannells (Girls), Zazie Beetz (Deadpool 2) and Mark Hamill (Batman: The Animated Series, Star Wars). The series will tell the story of Mark Grayson, the teenage son of superhero Omni-Man, of whom he has inherited his powers. Mark decides to become a superhero himself called Invincible. The first season is expected in 2020.

US broadcasting network ABC has ordered a pilot for Triangle, coming from Jon Harmon Feldman (No Ordinary Family) and Sonny Postiglione (Life on Mars (US)). In the proposed series a family gets lost in the Bermuda Triangle and shipwrecks on a mysterious island. There they have to band together with other castaways from throughout history to survive and maybe escape. Another trailer is ordered for Stumptown, from Jason Richman (Detroit 1-8-7). Based on the Greg Rucka graphic novel of the same name, in which a female detective, Dex Parios, with a complicated history solves other people’s messes, ignoring her own.

US cable channel Syfy has ordered a pilot episode of Cipher, in which a father and son are in a war over artificial intelligence. They also ordered a pilot for Cult Classic, a dark comedy about a group of teens who have to deal with a 1990s slasher movie-obsessed serial killer.

US broadcasting network CBS also has ordered a number of pilots, which will be in the running for being picked up for the 2019-2018 season. They are… Coming from Rob Doherty and Jason Tracey (Elementary, Burn Notice) is Frankenstein, in which a San Francisco homicide detective is brought back from the dead by, you guessed it, Dr Victor Frankenstein. From Jeffrey Paul King (Elementary) comes Republic of Sarah, in which a New Hampshire town discovers a valuable resource within their borders and promptly start their own nation, independent from the United States. Carol’s Second Act is a comedy starring Patricia Heaton (The Middle) who will play a mother who after raising two children enters medical school to become a doctor. And finally Courthouse, a legal drama following everyone imaginable, from judges to cops, in the Los Angeles legal services.

CBS seems to be pleased by Dick Wolf’s (Law & Order) FBI. The first season has not even finished its first season, but in the latter half of the series, a backdoor pilot will air for FBI: Most Wanted. As the title implies the spin-off would follow a team of FBI agents hunting the most notorious criminals. While the series is not yet ordered, CBS has a “series commitment,” meaning that if the series is not picked up producer Universal Television still gets paid a fair amount. So it is a good bet this spin-off will happen.

CBS All Access has announced a premiere date for the third revival series of anthology series The Twilight Zone. Presented by Jordan Peele (Get Out) the series will kick off on Monday, April 1 with two episodes. Followed by weekly episodes on Thursday, starting April 11.

Musical comedy My Crazy Ex-Girlfriend will go out with a bang, after its series finale. Yes, It’s Really Us Singing: The Crazy Ex-Girlfriend Concert Special will air straight after the finale on The CW. The title should be pretty much self-explanatory, but to be clear, it will be the cast singing fan-favourites from the series’ four seasons.

ABC and Marvel have released the first trailer for Marvel’s Agents of S.H.I.E.L.D. Season 6!

US cable channel USA has released a trailer for legal drama Suits spin-off series Pearson, starring Gina Torres (Firefly). No premiere date is given, but it can be far off.

Amazon Prime Video has released another teaser for their TV reboot of Hanna. The first episode of the spy thriller will be released on Sunday, February 3 after a “minor American Football game” involving a Super Bowl.

US streaming service CBS All Access has released a trailer for the third season of legal drama The Good Wife’s spin-off sequel series The Good Fight. Season 3 will premiere on Thursday, March 14.

Netflix also released a trailer for Quicksand. A Swedish crime drama based on Malin Persson Giolito’s 2016 novel of the same name. The story tells about a mass shooting on a prep school and its aftermath. The series is released on Friday, April 5.

Furthermore, Netflix released a trailer for Season 2 of animated fantasy series The Dragon Prince. Season 2 will be released on Friday, February 15. 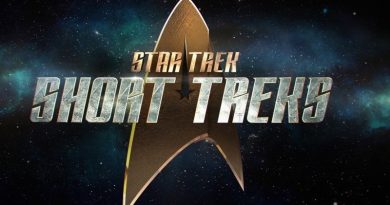