Welcome to the weekly TV news round-up where we go into the latest TV news regarding renewals, cancellations, and pick-ups. This week we have a host of (international) trailers.

US broadcast network CBS has cancelled its Summer offering Salvation. The series about averting the end of the world ends after two seasons and on a cliffhanger, which is par of the course for CBS Summer dramas (see: Under the Dome, Zoo, etc.)

US cable network TV Land has cancelled comedy series Teachers after three seasons. The series was the last original series standing on the network, which looks to return to its roots of airing comedy reruns.

US broadcast network CBS has begun development of a revival of comedic drama Northern Exposure. The original series aired on CBS for six seasons between 1990 and 1995. The series follows the fish-out-of-water experience of New York physician Dr. Joel Fleischman (Rob Marrow) when he moves to Alaska. The series was critically well received and won four Emmy Awards, one of which for Outstanding Drama Series, in 1992 and the Golden Globe for Best Drama Series in both 1992 and 1993.

We have reported a number of times of a potential sequel spin-off for recently concluded comedy series The Middle. However, the “Sue Heck” centric series to be set in Chicago called Sue Sue in the City, has not been picked up by US broadcast network ABC.

HBO has released a trailer for the third season of comedy series Crashing, starring Pete Holmes, who is also creator, writer, and executive producer. The series is semi-autobiographic and follows a stand-up comedian trying to build a career. The new season starts on Sunday, January 20.

Netflix released a trailer for its Koreans original series Memories of the Alhambra. While Korean the series is set in Spain where an investment firm executive (Hyun Bin) is looking for the creator of an innovative augmented-reality game meets a woman (Park Shin-hye) who runs a hostel in Spain. The 16-episode series is on Netflix and starts airing in South Korea’s tvN starting Saturday, December 1.

Netflix also released a trailer for Australian original Pine Gap. The six-part political thriller series is set around the personnel of the Australian and American joint defence intelligence facility at Pine Gap, south-west of the town of Alice Springs in the Northern Territory of Australia. The series is on Netflix Friday, December 7. The series already aired on Australian broadcaster ABC.

Netflix further released a trailer for another take on Patrick Süskind’s 1985 literary historical fantasy novel Perfume: The Story of a Murderer. Unlike the story of the novel and the 2006 movie, this adaption will be in the novel’s original language of German and be set in modern times instead of the 18th century. In the story of the TV series a group of six boarding school students develop an intense passion for scent. Years later they are all suspect when one of them is brutally murdered and secrets are revealed. The series is released on Friday, December 21.

YouTube has released a trailer for their new original series Wayne. The comedy series follows Wayne (Mark McKenna), a 15-year-old who together with his new friend Del (Ciara Bravo) starts the hunt to get his late father’s stolen 1978 Pontiac Trans back. The series is released on Wednesday, January 16.

US cable network Syfy has released a trailer for the fourth season of fantasy series The Magicians, starting Wednesday, January 23.

UK broadcaster Sky has released a trailer for the second series of the Tim Roth starring Tin Star. The series follows Roth as a former London police detective who becomes the new police chief of the town of Little Big Bear in the Canadian Rockies. Series 2 starts Thursday, January 24 in the UK. 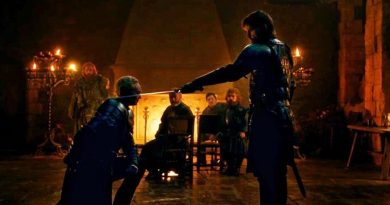