Welcome to the weekly TV news round-up where we go into the latest TV news regarding renewals, cancellations, and pick-ups. This week we got sad Marvel news and another host of trailers.

The CW has renewed its Summer offering The Outpost for a second season. The fantasy series’ renewal probably got the nudge by the fact it is also produced for international Syfy channels, as the series got real low ratings, even at The CW’s standards.

US premium cable network Showtime has renewed Jim Carry led drama Kidding for a second season. Its first season of the series following a children’s TV icon with an imploding personal life is currently halfway. The second season is to be expected in 2019.

Netflix has renewed Jason Bateman (Arrested Development) and Laura Linney (Mr. Holmes) series Ozark for a third season of ten episodes. The series tells the story of a financial planner with shady dealings who, after disappointing a Mexican drug cartel, has to set up a new money laundering operation in the Ozarks.

I'm happy for me, but concerned for Marty – it's official OZARK 3 is on its way. pic.twitter.com/xeGXZxfrjB

It’s with sadness we have to report that we have learned from Deadline that the first Marvel series on Netflix has been cancelled. (Or at least officially, as Marvel’s The Defenders remains in limbo.) Marvel’s Iron Fist has been cancelled after two seasons. While having a very weak first season (thank you very much, Scott Buck (Marvel’s Inhumans)!), Iron Fist was actually on an upward trajectory. Danny Rand/Iron Fist’s guest appearance in Marvel’s Luke Cage Season 2 was well met, and Iron First Season 2 was quite the improvement over Season 1. But maybe there is a glimmer of hope left. It might be possible upcoming streaming service Disney Play could pick up the Marvel series to add to their ever growing roster. Especially as Marvel TV wanted to continue the series.

with every end is a new beginning. I have an enormous amount of love and respect for everyone involved with the last two seasons of this show. Defending the greatest city in the world amongst the most talented and warmest people has been a privilege and a joy. Blessed to have taken this journey and grateful for the ongoing support. 🐲🔥💛

Walmart’s Vudu’s ad supported streaming service Movies On Us is partnering with MGM to make a sequel TV series to 1983 comedy starring Michael Keaton Mr. Mom. The sequel series will have baby Megan all grown up with a family of her own. Like in the movie her husband gets to care for the newborn when Megan returns to work. Currently there is no release date set.

US streaming service Hulu has given a straight-to-series order to drama Wu-Tang: An American Saga. Like the title hints the series will be based on the real life story of the hip-hop group. The series will be written by Alex Tse (Watchmen) and Wu-Tang Clan front man The RZA.

Emma Roberts (American Horror Story) is going to star in new Netflix series Spinning Out. The series will have a 10-episode first season and will follow Roberts’ character “Kat Baker.” A successful figure skater who’s career in this tough sports world takes a turn for the worse when she has a bad fall. She will get a second chance as a pair skater with a shot at the Winter Olympics. However, she carries a secret that would unravel her life if revealed. The drama comes from Samantha Stratton (Mr. Mercedes) and currently does not have a release date.

Fox21 TV Studios have acquired the rights to develop a TV series based on Jim Butcher’s urban fantasy novel series The Dresden Files. Syfy, or Sci-Fi Channel at the time, created a short lived adaption lasting only one season in 2007. The Dresden Files follows the exploits of consulting wizard Harry Dresden, who deals with all kinds of supernatural cases. No word yet on when we can expect a TV series or who will air it.

Rebecca Romijn (The Librarians) has released a first photo of her as Star Trek: Discovery’s “Number One.” A further unnamed character that until now only was seen in the first Star Trek: The Original Series pilot episode “The Cage,” which is chronologically set before Discovery and played by Majel Barrett-Roddenberry. Barrett later played Lwaxana Troi on Star Trek: The Next Generation and Deep Space Nine, and provided the voice of the ship’s computer for almost all Star Trek TV series.

Going for the gold! What an honor. First look at Number One on #StarTrekDiscovery

Ridley Scott (Blade Runner, Alien) will executive produce and direct some episodes of US cable network TNT sci-fi series Raised by Wolves. The series will tell the stories of a android couple tasked with raising human children who will have to navigate a new interplanetary colony ripped apart by religious differences. Aaron Guzikowski (Prisoners) will be the series’ showrunner. No release date is now at the moment.

A first look at Ruby Rose (John Wick: Chapter 2) as Batwoman in the upcoming DC TV crossover on The CW. As you might now at this point it is the intent that she will get a solo series.

It’s been announced by HBO that the Mahershala Ali (Moonlight) led third season of True Detective will premiere on Sunday, January 13.

CBS has ordered a pilot episode for The Secret Six, another DC Comics adaption by Warner Bros. TV. Rick Muirragui (Suits) will write the pilot about a group of six morally ambiguous strangers, who each have their secret abilities and pasts. They are brought together by an enigmatic figure who blackmails them into as a team. The goal? To expose the corruption of the corporate and political elite. Assuming the series will be picked up, it is to be expected to air in the 2019-2020 US broadcasting season. And who knows, maybe it will move to CBS’s sibling network The CW after that, just like Supergirl.

Last week we reported that Fox and Warner Bros. TV’s Lethal Weapon TV series would lose Murtaugh actor Damon Wayans after Season 3 has shoot it’s 13 episodes. Wayans said so himself in a video. However, one week later and we now learn via Deadline that Wayans will stay on for two extra episodes. Growing the amount of Season 3 episodes to 15.

Netflix has announced its cast for their adaption of Andrzej Sapkowski’s fantasy novel series The Witcher. We already knew Henry Cavill (Mission: Impossible – Fallout) will play the titular Witcher Geralt of Rivia, member of an order of monster hunters in a Slavic fantasy world. He will be joined by Anya Chalotra (Wanderlust) as Yennefer of Vengerberg, Freya Allan (BBC’s upcoming The War of the Worlds) as Cirilla “Ciri” Fiona Elen Riannon, Princess of Cintra; Jodhi May (Strike Back) as Calanthe Fiona Riannon, Queen of Cintra; Björn Hlynur Haraldsson (Fortitude) as Eist Tuirseach, King of Cintra; Adam Levy (A.D. The Bible Continues) as Mousesack, druid advisor to Queen Calanthe; MyAnna Buring (Ripper Street) as Tissaia de Vries, from the Council of Wizards; Mimi Ndiweni (Mr Selfridge) as Fringilla Vigo and Therica Wilson-Read (Suicide Club) as Sabrina Glevissig from the Lodge of Sorceresses, and Millie Brady (The Last Kingdom) as Renfri, outcast Princess of Creyden. More cast members will be revealed. Currently we can say, based on these characters, that the series will not jump right into adapting the saga novels of The Witcher series, but at least take elements from the short stories novels that precede them.

Released at the New York Comic-Con, the latest trailer for Star Trek: Discovery Season 2 gives us another taste of what it to come. We get our first moving footage of Ethan Peck’s take on Spock. Next to that we are introduced to the new aspect ratio, which gives us thicker black boarders for, according to a TrekCore interview with executive producer Alex Kurtzman, a more cinematic feeling. At the NYCC it was also announced Season 2 will start on Thursday, January 17 on streaming service CBS All Access in the US. We assume this means Netflix will have the series internationally (excluding Canada) a day later like with Season 1.

Syfy released a first look at Happy! Season 2 at the NYCC. The new season in 2019 of the series based on the Grant Morrison comic looks as crazy as the first one. Both Christopher Meloni and Patton Oswalt will return to star.

Also at the NYCC, Amazon Prime Video has released a first trailer for their coproduction with the BBC Good Omens. The six-part series adapts the Terry Pratchett and Neil Gaiman novel of the same name, and will star David Tennant (Doctor Who) and Michael Sheen (Masters of Sex). Good Omens will first be released on Amazon Prime Video and will a bit later air on BBC Two in the UK somewhere in 2019.

Another trailer released at the NYCC was one for Fox and Warner Bros.’s DC Comics series Gotham. Season 5 will be the final one for the series and you can be sure they will go full out for it. Gotham is expected to premiere early 2019 on Fox in the US, with a later international release on Netflix.

Netflix release a final trailer for the sixth and final season of House of Cards. Be warned, the trailer might spoil something you might already know, but still. Season 6 will be released on Friday, November 2.

Netflix also release a trailer for their comedy series The Kominsky Method starring Michael Douglas (Ant-Man and The Wasp) and Alan Arkin (Argo). The series is created by Chuck Lorre (The Big Bang Theory) and follows two older friends who navigate their days with humor, dignity, and prostate problems.

The CW and Warner Bros. TV have released a sizzle for Season 7 of DC Comics TV series Arrow. The new season will start Monday, October 15 on The CW in the US.

The BBC has released a first look of their upcoming spy novel adaption of John Le Carré’s The Little Drummer Girl. A coproduction with AMC. The series stars Florence Pugh (Malevolent), Alexander Skarsgård (The Legend of Tarzan), and Michael Shannon (The Shape of Water). 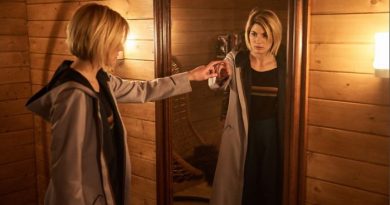 Doctor Who: It Takes you Away – Review