Welcome to the weekly TV news round-up, where we go into the latest TV news regarding renewals, cancellations, and pick-ups. This week we have renewals, pick-ups, some interesting developments, and a host of trailers.

The first season still needs to air and it moves from American cable channel TNT to its sister channel TBS, but the TV adaption of the 2013 sci-fi movie Snowpiercer already will get a second season. Here is a trailer for the movie to get a taste.

TBS also renewed its comedy series The Last O.G. for a third season. The series created by Jordan Peele (The Twilight Zone) stars Tracy Morgan (30 Rock) as an ex-convict returning to Brooklyn in New York City and his journey to become a better man.

We surprised the cast of #TheBoldType with some very big news.

The Bold Type is coming back for Season 4 on @FreeformTV. pic.twitter.com/rYP1VsFQxH

Freeform has also renewed its mermaid series Siren for a third season.

Freeform out here holding down the “apex predators in a matriarchal society” genre all by myself! Sometimes I speak in the third person when excited. Your mermaid role models will be back for Season 3.

Check out our upcoming roundup for Season 2019 – 2020 for the full list of renewed American broadcast TV series.

The CW’s digital platform The CW Seed has announced an animated Deathstroke series, based upon the DC comics character that has been in the movie Justice League, TV series Arrow, and the upcoming second season of DC Universe’s Titans, among many other appearances. While they say it is a series, it is more likely it will be a animated (short) movie chopped up in five minute segments, just as previous “series” like Vixen, Freedom Fighters: The Ray and Constantine: City of Demons. Those also got home media releases with additional footage.

No mercy…Deathstroke is coming soon to CW Seed.

Cable channel Syfy has ordered a 10-episode first season of the adaption of Vault Comics series Vagrant Queen by Magdalene Visaggio (Kim & Kim) and artist Jason Smith to TV, Deadline has learned. An all-female team of writers and directors will be led by showrunner Jem Garrard (Android Employed). Adriyan Rae (Light as a Feather) will star as Elida, a orphan former child queen on the run from the Republic government throughout the galaxy. When her old friend Isaac (Tim Rozon) turns up with the news that her mother is still alive she goes on a daring mission to save her mother in the heart of her former kingdom. We should expect Season 1 somewhere in 2020.

Netflix has ordered a TV series adaption of The Magic Order, based upon writer Mark Millar (Kick-Ass) and artist Olivier Coipel’s (The Mighty Thor (2011)) recent comic of the same name that was published in conjunction with Netflix, who now own most of Millar’s works. The fantasy series will follow a group of five families of seemingly ordinary people who are actually magic users that have sworn to protect the world against monsters for generations. However, now they are being picked off one by one by some dark force. Mark Millar will serve as executive producer as well as Lindsey Beer (Chaos Walking), who will be showrunner, and James Wan (Aquaman, Swamp Thing), who will direct the pilot episode.

Check out our upcoming roundup for Season 2019 – 2020 for the full list of picked up American broadcast TV series.

Streaming service Amazon Prime Video has decided not to renew comedic superhero series The Tick for a third season. A new home for the series is search for, but the changes of that happening are always slim.

I'm sorry to say Amazon has chosen not to proceed with @TheTickTV I'm not sorry to say I love this show, its cast, its story, and its message. Destiny demands that my compatriots and I now seek a new home for this series.

Meanwhile thank u from my heart's bottom to all the fans who've shared their love with us and the show. Thank you sweet #LunaTicks and #LunaTickArmy for your militant affection 🙂 We want to find a place to make more. That is the mission now and we are on it.

Check out our upcoming roundup for Season 2019 – 2020 for the full list of cancelled American broadcast TV series.

On the CBS upfront presentation American streaming service CBS All Access has announced Star Trek: Picard, the official title of the Patrick Stewart starring series which will be with us later this year. They also revealed that internationally the series will be aired in Canada on the Space channel and elsewhere be streaming on Amazon Prime Video. This is a bit of a surprise, as all other Star Trek series are currently streaming at Netflix.

#StarTrek: Picard will stream exclusively on @CBSAllAccess in the United States, on Amazon #PrimeVideo in more than 200 countries and territories and in Canada on Bell Media’s @SpaceChannel and OTT service @CraveCanada. @StarTrekCBS @primevideouk https://t.co/f3mVPY449M pic.twitter.com/iDrmtDiQLg

A teeny look at the #StarTrek #Picard show coming to @CBSAllAccess. #Upfronts pic.twitter.com/1uiUkPi81r

At the 6th Annual Moffett-Nathanson Media and Communications Summit the Walt Disney Company’s CEO Robert Iger has said that a third Star Wars live action series in development for upcoming streaming service Disney+. That is all we currently know. Later this year we will get the first live action series in The Mandalorian, set just after Star Wars: Episode VI – Return of the Jedi. And in 2020 we will also get a currently untitled live action series about Rogue One’s Cassian Andor.

Netflix and publisher Dark Horse Comics has agreed on a first look deal for Netflix to adapt their comic books. Netflix already has success with adapting their The Umbrella Academy. Many other comics could find a home at Netflix, such as Barb Wire, Beasts of Burden, Dept. H, The End League, Ghost, and maybe another shot at Hellboy. Dark Horse Comics is also known for their licensed comics, such as Alien, Predator, Star Wars and more, but those are obviously not part of this deal.

HBO also released a trailer for Russel T. Davis (Doctor Who, Torchwood) new series Years & Years. It will premiere on HBO on Monday, June 24 but is already airing in the UK on BBC One on Tuesdays.

Netflix has released another trailer for new thriller series What/If, released on Friday, May 24.

On Wednesday, June 5 Netflix will release a sixth season of three episode of sci-fi anthology series Black Mirror and released a trailer for it.

TVLand’s comedy series Younger has another trailer for its sixth season, which begins Wednesday, June 12.

CBS All Access has released a trailer for their biographic series Strange Angel’s second season, which stars Thursday, June 13.

Freeform has released a trailer for their reboot of Party of Five. No premiere date has been given yet.

Freeform also released a trailer for their fantasy series Motherland: Fort Salem, which also has not been given a premiere date yet.

Adult Swim has released a announcement video that confirms that Season 4 of sci-fi comedy Rick and Morty will be with us this November.

HBO and the BBC have released new teaser trailers of fantasy series His Dark Materials, which you might know as The Golden Compass, which is said to be with us soon.

Not a trailer, but those with American internet access can watch the first episode of streaming service DC Universe Original Series Doom Patrol for free, until Thursday, May 23.

Sky has released a teaser trailer for new London set thriller series Temple, which is to air somewhere this Autumn. 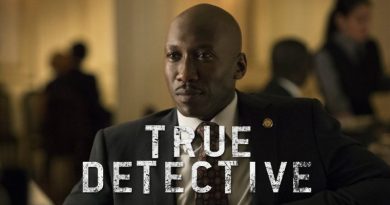