Welcome to the weekly TV news round-up, where we go into the latest TV news regarding renewals, cancellations, and pick-ups. This week we have a number of renewals, a shocking cancellation and a host of trailers.

Have you heard the good news?! High Maintenance has been renewed for Season 4 🎉 #HMonHBO

Satellite broadcaster Sky has renewed the Tim Roth starring Tin Star for a third and final series. The series about a British police officer who becomes a cop in the Canadian Rockies to escape his past will finish with six new episodes.

Comedy series Schitt’s Creek has been renewed by Canadian broadcaster CBC for a sixth and final season. The series follows the Rose family led by Eugene Levy (American Pie) and Catherine O’Hara (Home Alone), who after losing their wealth go to live in their only property left: the town of Schitt’s Creek. There former rich clash with the local townspeople.

To Our Dear Fans… pic.twitter.com/FIXjD3gbzA

American broadcast network ABC has renewed Roseanne spin-off/continuation The Conners for a second season. The new run will have 13 episodes instead of Season 1’s 11. It is also quite possible that Johnny Galecki will return more often as “David Healy” now that he is done with The Big Bang Theory.

Our only cancellation this week, or rather ending series, is a shocker. After no less than 15 seasons and an incredible 327 episodes horror series Supernatural will come to an end after Season 15 next year on The CW. Jared Padalecki, Jensen Ackles and Misha Collins brought us the decision to finish Supernatural via a video posted on social media.

Hey #SPNFamily here’s a little message from @JensenAckles @mishacollins and me. I’m so grateful for the family that’s been built because of the show. Excuse me while i go cry. pic.twitter.com/QDXDsAyIfK

Netflix has picked up a coming-of-age comedy series by Mindy Kaling (The Mindy Project). The untitled series will have a first season of ten episodes and tell the biographical story of Kaling as a first-generation Indian-American teenage girl.

HBO is bringing Perry Mason back to the screen as a limited series. The legal drama series is about a criminal defence lawyer in Los Angeles, California, played by Matthey Rhys (The Americans). This will be the third Perry Mason series. The original ran for nine seasons on CBS between 1957 and 1966 starring Raymond Burr (Ironside) and was revived as The New Perry Mason for one season in 1973, with a series of 30 TV movies following between 1985 and 1995. The new limited series will be written by Rolin Jones (The Exorcist) and Ron Fitzgerald (Westworld).

Sad news as Richard Erdman, who was known for his recurring role of “Leonard” in comedy series Community, has died at age 93.

Showtime has cast Rory Kinnear (SPECTRE) for horror series Penny Dreadful: City of Angels. Interestingly, Kinnear will not reprise his role of Frankenstein’s Monster in Penny Dreadful. Instead, he will play “Dr Peter Craft”, a successful German paediatrician and the head of the German-American Bund, who try to keep the United States out of World Word II. It remains to be seen if this spin-off sequel will indeed not be connected to the original Penny Dreadful.

Netflix has clarified a rumour about the episode order you get to see when watching their new sci-fi anthology series Love Death + Robots. Some suggested that the episode order was shuffled according to your sexual preference. Netflix had this to say on the matter via Twitter…

We've never had a show like Love, Death & Robots before so we're trying something completely new: presenting four different episode orders. The version you're shown has nothing to do with gender, ethnicity, or sexual identity — info we don't even have in the first place.

Talking about Netflix, apparently, something rather interesting happened on the streaming service this week. There are unconfirmed reports that people have spotted a TV series in their recommendations called Jurassic World: Camp Cretaceous. Of course, the unconfirmed series was quickly removed from view if it was even there to begin with, but there is some merit to this. In the past two animated cartoons had been in pre-production at Universal. One of which, Jurassic Park: Chaos Effect, even received merchandise. Also, Netflix and Universal have teamed up for a DreamWorks Animation series based on the Fast & Furious series. Which according to president of DreamWorks Animation Television Margie Cohn in a Variety article, was “only the beginning.” More on this when we hear it.

@ChrisLikesDinos Saw "Jurassic World: Camp Cretaceous" as a title suggestion on Netflix. I don't know much about how Netflix works, so any idea as to why it's showing up here? pic.twitter.com/ck5OrS8dGE

It looks like Amazon Prime Video is making work of adapting Stephen King’s fantasy, horror and Western magnum opus The Dark Tower to the screen. Jasper Pääkkönen (Vikings, BlacKkKlansman) has been cast as recurring antagonist in King’s works “The Man in Black” or “Randall Flagg” among other names, formerly played by Matthew McConaughey in The Dark Tower movie. Also, cast is Sam Strike (Nightflyers, the upcoming Chernobyl) as “Roland Dechain” otherwise known as “The Gunslinger” who fights and races Flagg to the infamous Dark Tower.

Drew Goddard (Marvel’s Daredevil) has signed a multi-year deal with now Disney-owned 20th Century Fox TV. The deal would be for four years and between 50 and 70 million Dollars would be involved. Goddard wrote for TV series like Buffy The Vampire Slayer, its spin-off Angel, and Lost, produced Alias, executive produced The Good Place and directed The Cabin in the Woods and Bad Times at the El Royale.

It has been revealed what Netflix’s next interactive project is after Black Mirror: Bandersnatch. In You vs. Wild you will go on an adventure with survivalist Bear Grylls. Get your first taste of the Wednesday, April 10 released interactive series with the video below.

Netflix also gave us a trailer for their Sir David Attenborough narrated nature documentary series Our Planet, which you can see on Friday, April 5.

A trailer has been released by Netflix for “Part 2” of the first season of horror series Chilling Adventures of Sabrina. The new episodes will be released on Friday, April 5.

Keeping with the horror, Netflix released a trailer for their Z Nation prequel series Black Summer. It is released on Thursday, April 11.

Netflix has also released a trailer for the much anticipated third season of sci-fi mystery series Stranger Things. The new season will be released on Independence Day in the US, otherwise known to the rest of the world as Thursday, July 4.

Furthermore a trailer was released by Netflix for animated series Rilakkuma and Kaoru. Released on Friday, April 19.

Netflix also released a host of anime related trailers. The first is for Levius, which will be released in Winter 2019.

The second is 7Seeds, which will be released somewhere in 2019.

The third is Kengan Ashura, which will be on Netflix starting Wednesday, 31 July.

And finally a date announcement for Neon Genesis Evangelion, which will be on Netflix Friday, 21 June.

American broadcaster Fox has released a video for their “new chapter”. This “new chapter” is of course the fact that the Walt Disney Company has now officially acquired a host of 21st Century Fox assets, of which the Fox broadcasting network is not part. We can also use the video to make a guess as to which TV series we will see return in the 2019-2020 broadcast season, especially as WWE SmackDown is featured, which only stars airing on Fox next season. The Passage, The Simpsons (already renewed), Bob’s Burgers (renewed), Family Guy (renewed), Empire, The Orville, The Resident, Gotham (in its final season), Fringe (finished years ago), Glee (also finished) Proven Innocent, Last Man Standing, The Cool Kids and 9-1-1 are the scripted series featured. We can only wonder what the fate will be of these series, but it is noticeable that Lethal Weapon, Rel, Star and The Gifted were not included.

HBO has released a teaser trailer for their TV movie sequel to western series Deadwood, which aired on HBO for three seasons between 2004 and 2006. Deadwood: The Movie will air on Friday, May 31.

The BBC has released a trailer for historical drama based on real events Gentleman Jack, a co-production with HBO. The series is based on the diaries of Anne Lister, a 19th century English landowner who is often called the first modern lesbian. HBO will premiere the series on Monday, April 22, with no airdate confirmation by the BBC at the moment. 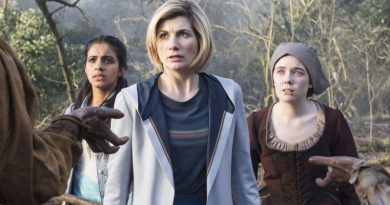