US network The CW did not pick up proposed Supernatural spinoff Wayward Sisters past May, but unlike previous spinoff attempt Bloodlines the set up story in Supernatural Season 13 will get resolved in Season 14. As Entertainment Weekly learned from Supernatural showrunner Andrew Dabb.

The US cable network USA has cancelled Shooter, starring Ryan Philippe. Read more about it in our article here.

The Hulu series Castle Rock based upon the works of author Stephen King, has received a second season order from the US streaming service. The psychological thriller set in the town Castle Rock in the US state of, you guessed it, Maine, and is the setting of King novels like Cujo, Bag of Bones, and Needful Things, and was referenced in numerous others, like It, The Mist, and Under the Dome.

Amazon Prime Video has released the first bit of footage from their upcoming series The Romanoffs, from Mad Men creator Matthew Weiner. The first season of eight episodes starring a massive cast will premiere Friday October 12.

Marvel’s Runaways Season 2 has been announced as premiering all 13 episodes on US streaming service Hulu on Friday December 21. Season 2 will apparently pick up within three days after the end of Season 1 and will have a clear connection to the MCU at the end of the season. Whatever that means.

We’re not in Brentwood anymore. Season 2 of #MarvelsRunaways will return December 21, only on @Hulu. pic.twitter.com/LRvkA9EG8U

After four seasons US cable channel E! has cancelled their first ever scripted drama series The Royals starring Elizabeth Hurley. The fictional British monarchy might not come to an end, however. As production studio Lionsgate TV is shopping the series around for a fifth season pick up, according to Deadline.

Netflix has released a full trailer for the upcoming second season of Marvel’s Iron Fist, which will be with us on Friday 7 September.

US cable channel TNT is giving period psychological crime series The Alienist a sequel series called The Angel of Darkness. The limited series will be based on the second novel in author Caleb Carr’s Laszlo Kreizler series, of which The Alienist was the first. The cast of the first series – Daniel Brül, Luke Evans, Dakota Fanning – is to return.

Sitcom revivals are all the rage it seems. Another one primed for reviving by Sony is 90s sitcom Designing Women, according to TVLine. The comedy centres around a group of four women and one man working at an interior design company in Atlanta, Georgia. It originally ran for seven seasons and 163 episodes between 1986 and 1993. Timeslot companion Murphy Brown is already set for a revival later this year on CBS.

US broadcast network ABC has officially ordered a Pilot for a Sue Heck centred spinoff to long running and recently finished sitcom The Middle. Word is that the spinoff will leave The Middle’s small town for the big city of Chicago.

According to Deadline Fox 21 Television Studios, director McG’s Wonderland Sound & Vision and DJ2 Entertainment have acquired the rights to develop a TV series based on the recently released videogame Vampyr developed by French game studio Dontnod Entertainment and published by Focus Home Interactive. Check out the video below to get a taste of the story…

History has renewed Knightfall for a second series. The period drama chronicling the feats of the Knights Templar has also a new cast member to welcome in non-other than Mark Hamill. The show also gets a new showrunner in Aaron Helbing (The Flash, Black Sails, Spartacus: War of the Damned).

US based cable channel USA has ordered Threadstone, named after the shady intelligence operation the series will be set in the Jason Bourne movie universe. The Universal Cable Production produced first season will have 10 episodes and have Tim Kring (Heroes, Touch) as showrunner and executive producer. The series will go into production in 2019. 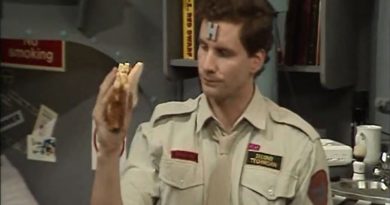