Looks like Pod Cat has picked my good self to do this episode of The Pod Bay Door, so I hope you’re all ready for a bunch of mostly eclectic, really weird shi- stuff. I meant stuff. Let’s begin with… 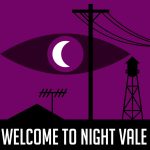 This podcast probably needs little introduction. One of the most downloaded podcasts on the Internet, Welcome to Night Vale is set in a town where black helicopters are a regular sight in the skies, a sentient glow cloud is head of the school board, every government conspiracy theory is true and absolutely no one is allowed in the Dog Park, for fear of the ever-present mysterious hooded figures.

Community radio host Cecil and his amazingly velvety voice is your lens into this funny, scary, and even a little emotional show. And hey, if this is the show for you, Welcome to Night Vale almost invariably has a live tour every year, which is very much worth going to. There’s also two books based on the podcast written by series creators Joseph Fink and Jeffrey Cranor that are definitely worth reading if you enjoy the podcast. 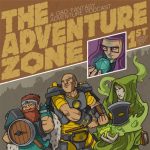 Hosted (and Dungeon Mastered) by Griffin McElroy, The Adventure Zone is a bi-weekly comedy/table-top adventure podcast, where Griffin guides his (somewhat hapless) two brothers Justin and Travis, and their father Clint, through the world of Dungeons & Dragons.

At the start of the podcast, none of them has any solid D&D experience, which makes for a fun and oftentimes tear-inducingly hilarious listening experience as they learn the ropes of role-playing and dungeon mastering. Add in a few instantly loveable characters and some thrilling set pieces, and you’ve got yourself hundreds of hours of entertainment.

If you’ve ever wanted an in-depth podcast about film scores and soundtracks hosted by an actual composer and film industry insider, this is the podcast for you.

Hosted by David W. Collins, a man who can boast a litany of behind-the-scenes credits on sound departments ranging from Uncharted 4 to upcoming TV shows like Star Wars: Resistance (as well as being a prominent voice actor and a major part of prominent Star Wars podcast Rebel Force Radio), The Soundtrack Show is a fascinating look into the world of film scores.

Naturally, the music of John Williams is heavily featured on the show, with Collins discussing some of Williams’ most popular scores from Jaws to Jurassic Park, Indiana Jones and, yes, Star Wars. Of course, the show isn’t solely about John Williams, no. Other episodes feature the music of Back to the Future, Tron, Universal monster music and more. So if you have even a passing interest in movie music, this podcast will undoubtedly teach you a bunch of fascinating facts about the subject.

Hello From The Magic Tavern 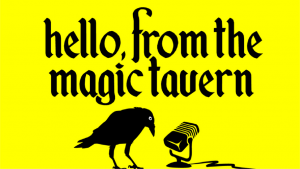 If you’ve never listened to Hello From The Magic Tavern before, here’s what’s going down: in 2015, podcast host Arnie Niekamp fell through a magical portal behind a Burger King in Chicago, into a fantastical world called Foon. Luckily he’s still getting a slight WiFi signal through the portal from the Burger King, and since he miraculously had his podcasting equipment with him when he fell through the portal, Arnie is able to upload a weekly podcast from the titular magic tavern the Vermillion Minotaur.

Every week he’s joined by a different magical guest; from elves who are rubbish at archery, goblin queens, flowers, friendly skeletons, Pizza Skull, to makeup artists and real estate agents (I swear the last two make sense in context). Alongside the various guests, Arnie’s also joined every week by his two co-hosts: Chunt the shape-shifting badger, and Usidore the Blue – a decidedly boisterous wizard with several dozen names and absolutely no low volume setting.

In reality, Hello From The Magic Tavern is an improvised comedy-fantasy podcast performed by Arnie Niekamp, Adal Rifai (Chunt) and Matt Young (Usidore). It’s terrifically funny and not once does it ever dip below being hugely entertaining. And for a podcast that’s almost entirely improvised, it features some pretty decent world-building. Personally, I’m astounded they can keep track of all of Usidore’s names. 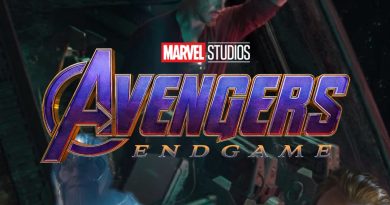