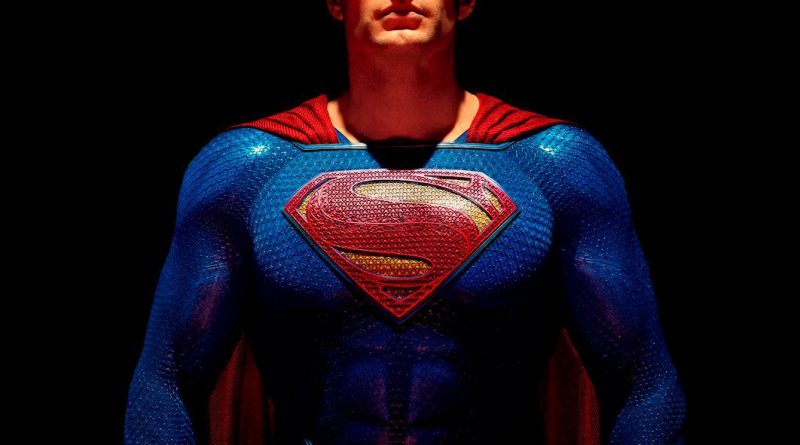 This week has been confusing. First, there was news that Henry Cavill’s Superman being retired and Cavill was leaving. Then we had news from his agent that he wasn’t leaving the role and there are just contractual negotiations going on. Then Cavill himself got in on the fun and posted a really confusing video that doesn’t tell us anything!

I haven’t written anything on this yet, as there’s a lot of haste to get the story out. Yes, it would be good as clickbait, saying he’s out. Then it would be good to say he’s in, breaking the news that the original news is all wrong.

Now the only thing I can do, (because I’m one man living in the bleak North of England), is write about Cavill’s Superman movies.

Man of Steel came off the back of the superb, yet ultimately detrimental Dark Knight Series. I say detrimental because as seen from the Titans trailer, DC is trying to recreate the Nolan-verse aesthetic. The Zack Snyder directed, Nolan Produced Superman film was dark and gritty. It muted colours and gave us a Superman that was far from the Christopher Reeve version as it could be.

It spent time to set up Krypton, which was designed in such a way that was completely different from the sterile white of the 70’s films. The world of Krypton felt real, and although we only spent 10 to 15 minutes there, its impact and place within this new universe was set.

It gave us a new version of Clark. Where the TV show Smallville had followed the Reeve style fairly closely, this had to try hard to split away from it. 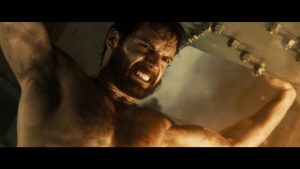 Cavill portrays a man trying to find his place. He literally travels the world looking for himself, and when people are in danger, he is compelled to help.

This is one of the reasons why I disagree with arguments against the finale. If he could have saved people, then he would have.

I talk about these two scenes all the time, but they actually are the reasons (along with Hans Zimmer’s score) why Man of Steel is the best film in the franchise.

You’ll believe a Man Can Fly

Clark is given a brief history of Krypton, culminating in the last days including Zod. He is told that he can push his powers to the limit. He is also given a Kryptonian flight suit. Then we see him in the suit for the first time, and despite the muted colours, it looks fantastic.

I know a lot of people were wondering where the red underpants had gone, but I don’t mind (OK Paul?). He emerges from the ship, which is re-created in a deleted scene in Justice League, and walks out into the arctic air, cape blowing. Looking back at this film, and despite what many say, Snyder knows how to capture a shot. Superman leaves the Scout ship and leaps into the air. 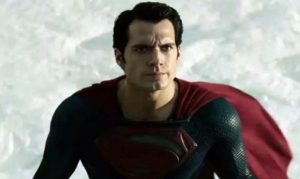 I mentioned Zimmer’s score, and Flight is an amazing track that compliments this scene. Superman begins to fly, and Cavill laughs a laugh of a man who has everything. He falls to start with emphasising that he’s still learning.

He kneels, the earth begins to shake, stones begin to float and he shoots off breaking the sound barrier. Within seconds he’s crossed continents, and then he soars up and away into orbit, in a shot reminiscent of Christopher Reeve’s signature movie sign off.

This scene cements Cavill as Superman, and in a way is almost an updated version of Reeve flying for the first time in Superman the Movie.

The second scene is just before the final battle between Superman and Zod. The World Engine has plonked itself on opposite ends of the earth. Superman and the army attempt to attack it, one above Metropolis, the other in the Indian Ocean. Superman has to fight the defences of the World Engine. To the credit of the writers, this is a great way to introduce Kryptonite. 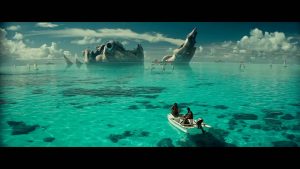 The film already established Superman’s weakness to his original home’s environment and as Krypton is being created from the earth he suffers. He is thrown into the gravity created by the World Engine, and summons all his strength to force his way up.

But before he flies through the World Engine, stopping the terraforming beam, we get a close up of Cavill. Drenched in light, he is mustering his strength. Cavill’s face is being affected by the pressure, and then we see it change, only slightly, but enough to know that we saw it. Love him or hate him, Snyder’s visuals are spectacular, and this is an amazing way of honouring the man brought Superman to life in the 70’s.

Henry Cavill’s face changes slightly into Christopher Reeve’s, but it’s subtle. First the mouth goes, then the eyes. Mixing both men at this crucial point of the film is amazing, and gives me goosebumps every time.

You may be reading this thinking, “This is just a DC fanboy’s opinion”. You’d be right, but the reason why I’ve spent a long time talking about Man of Steel is because this is the only character development this Henry Cavill’s Superman has had.

Based on a potential scene for Man of Steel, where Kryptonite is delivered to Wayne Manor, Warner Bros. jumped at the chance to getting their biggest cash cow in the mix. Alas, we were told that the next film would be Batman v Superman.

As the cheers died down, I asked ‘Why?’

Personally, and I think after the mixed reception towards Man of Steel, Warner should have concentrated on a sequel to Man of Steel. #MakeManofSteel2 (Get it out there).

Giving Man of Steel a sequel would have built on the foundations laid in Man of Steel. It didn’t have to be a big budget film; there didn’t have to have a massive world ending story or villain. Superman could have been living through the fallout of the Metropolis incident. 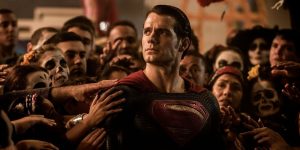 Show Superman saving people; add a scene of a cat in a tree. Establish this Superman as being the hero everyone loves.

‘It’s all about Batman’

But no! Warner didn’t want that, instead, they pushed forward with a new Batman, in an attempt to push profits and basically try and reignite the feeling from the Dark Knight series.

Despite me seeing this as a bad move on Warner’s part, I actually am one of the few (many) who enjoyed this film. I actually started reviewing on YouTube the day of BvS’s release! I urge you all NOT to watch it as it’s awful!

More character development for Superman would have meant that when they eventually came to killing him in BvS, (or in his third solo outing The Death of Superman) it would have mattered so much more. But again I say Alas, they chose a rushed approach.

Batman v Superman for me is predominantly a Batman film, and as we’ve seen from the numerous movie announcements, Warner a fully behind the Caped Crusader. It’s fair to say that Warner have made their money on Batman films in the past and he’s a safe bet to pin your universe to.

But when you have established a character like Superman you need to use him.

Superman was wasted in BvS. Not really having a story arc or reason to dislike Batman until the Extended Cut, he is just left to Superman about in some montages. 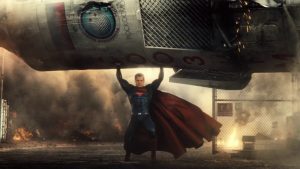 As I said though, I did enjoy the film, but the entire premise was over within about 15 minutes. Then the film turned into Dawn of Justice.

And then Doomsday kills Superman.

The battle between Superman, Wonder Woman and Doomsday (Batman doesn’t really help), is a spectacle, and I really enjoyed it. We see Superman get nuked, and then deliver the death blow to Doomsday. 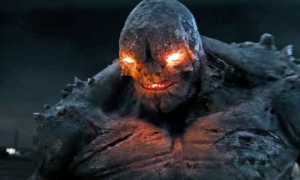 And that’s it. Superman is dead, there are two funerals, but when he’s in the ground the soil lifts hinting at a Super return.

Superman is a mere passenger in this film, but Cavill plays it well. If you’re not given anything to do, all you can do is do that well!

Putting aside the behind-the-scenes struggle of this film, the story is basically another terraforming plot from an even bigger foe, but not done well. I argue that every scene Superman is in is part of the reshoots because of the garish CGI mouth. There’s not one scene that I can confidently say ‘That’s real’. 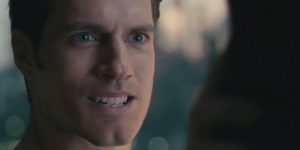 But again, putting Moustache-gate (I really hate that we put gate on every controversial thing now) aside, Cavill again played the reshoot Superman really well.

A quick aside about the whole moustache thing, but why not let Cavill grow a beard, then he would have been comic accurate and wouldn’t breach Paramount’s contract. And we’re back!

I would have liked to see what Snyder had in mind for the resurrected Superman, well, if the Snyder-Cut exists! But I can understand why DC and Warner to the revised approach. Simply put, cut the film to less than 2 hours long, and finish off the story as simply as it can be. 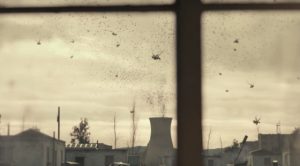 That includes and invasion, the formation of the Justice League, Introductions and character development of Aquaman, Flash and Cyborg and bring Superman back from the dead. I can see why Snyder wanted two movies for this.

Superman Returns (Not that One)

But Superman Returned and became brighter for it. Arguably (And I may be biased) the best parts of Justice League were Superman’s return and small battle between him and the Justice League, and when he saved the day against Steppenwolf. 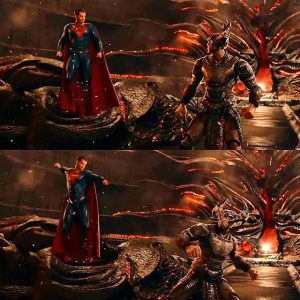 But with the new Shazam trailer, it seems we have a light-hearted movie that may rub off on a potential Man of Steel 2 (#MakeManofSteel2). There were rumours that Cavill would cameo in Shazam, but it looks like all this news has come from the fact that scheduling issues are getting in the way of that cameo. 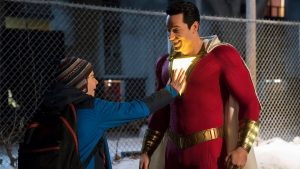 Reading that Cavill may not play Superman now, makes me feel as though he hasn’t been given the chance to fulfil the role. It’s the same as how I felt when Peter Capaldi announced he was leaving Doctor Who. They have been given one or two stories that make the character great, but the majority is mediocre at best.

I honestly believe this news is some kind of contract negotiation, or smokescreen to potentially distract from Ben Affleck leaving. I think Henry Cavill’s Superman has a lot more to do, but only time will tell.

Superman is an iconic character that deserves more than what has gone before. Henry Cavill is a talented actor who either won’t be able to continue or won’t WANT to continue.

He will want his career to move forward, but the fact that he went for the role back when Bryan Singer was directing shows he at least likes the role.

Yes, the majority of the film’s he has appeared in are not the best, but from what I’ve seen is he puts his all into it. But, I believe Henry Cavill’s Superman can be as Iconic, if not more so than Christopher Reeve’s. 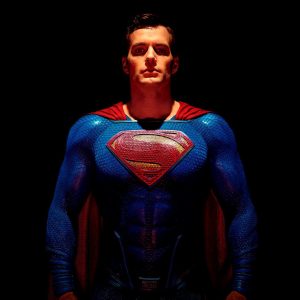 I’m the Ultimate Movie Geek and you can find me on Facebook, Instagram and on the WorldGeeklyNews.com. I also run the Official Podcast for the site, The Man About a Dog Movie Pod (MAaD Movie Pod).

Let us know what you guys think about all this DC news. Is there someone you think would make a good Superman? Is Henry Cavill’s best days as Superman behind him? 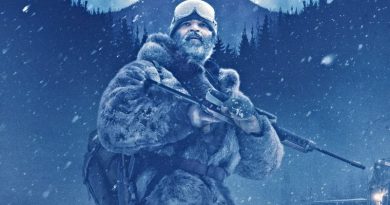