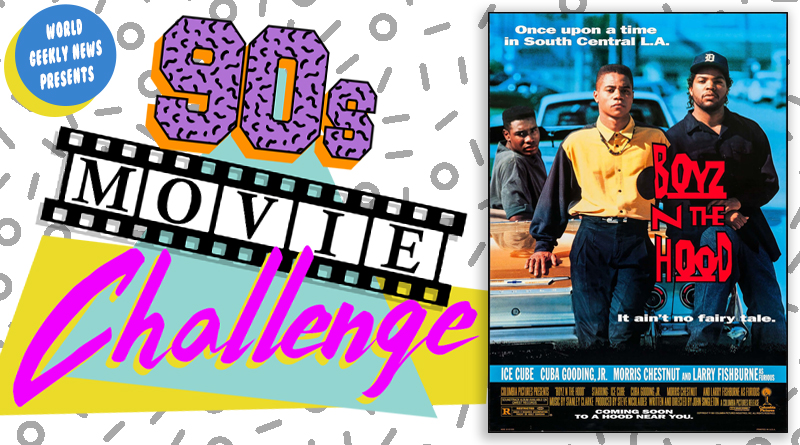 Welcome back Fans of the 90s! In a slight change to this week’s advertised #90sMC (What do you mean slight? It’s a completely different film, Ed.) Paul Childs has a look at the 1991 coming of age drama, Boyz N The Hood.

Beware, some major spoilers for both Boyz N The Hood and Do The Right Thing follow, right from the start…

I don’t know about you but I’ve watched every single one of our thirty-one 90s Movie Challenge films, as we’ve published these pieces each week. So far, they’ve all been films I’ve seen before. Some only once before, most of them multiple times.

John Singleton’s debut from 1991 marks the first film on our list that I have never seen before. In fact, I chose to write about this one specifically because I hadn’t seen it. Last year during our 80s Movie Challenge I also chose another film that I’d never seen before and one that Boyz N The Hood is often compared with. I watched Do The Right Thing at a time when it mirrored inflammatory events going on in the real world. It was difficult not to compare the killing of Radio Raheem by an overzealous white police officer to the tragic death of George Floyd in very similar circumstances.

Like Do The Right Thing, Boyz N The Hood‘s culminates in a death which leads to further violence. However, unlike Do The Right Thing, the death of Ricky Baker (Morris Chestnut) is not presented as an unfortunate death following a time of rising tensions brought on by culture clash and unbearable temperatures. Ricky’s murder, I’d argue, is ultimately more tragic, dramatically speaking, for a number of reasons.

Firstly, and perhaps most obviously, Ricky was working hard to better himself, to get away from the lifestyle that continually threatened to drag him down, through both athletic and (as we learn later) academic achievement. Ricky had a bright future. We never really find out a lot of Radio Raheem’s background. He’s almost a comic stereotype, whereas Ricky has hopes, dreams and a family (including a baby boy). But for me, the most tragic thing about Ricky’s death is that, unlike Raheem’s demise, it is not portrayed as an unusual event with outrageous but, in the end, relatively short-lasting consequences. The riot at the end of Do The Right Thing is like the pressure valve being turned to release tensions that had been rising throughout the film.

What’s so tragic about Boyz N The Hood‘s climactic events is that Ricky’s murder is presented to us as just something that happened; a part of an ongoing cycle of violence that the resident’s of the film’s titular hood have grown accustomed to and just accept as a part of their life. This is conveyed so expertly by Singleton by the continual presence of police helicopters and distant gunshots. 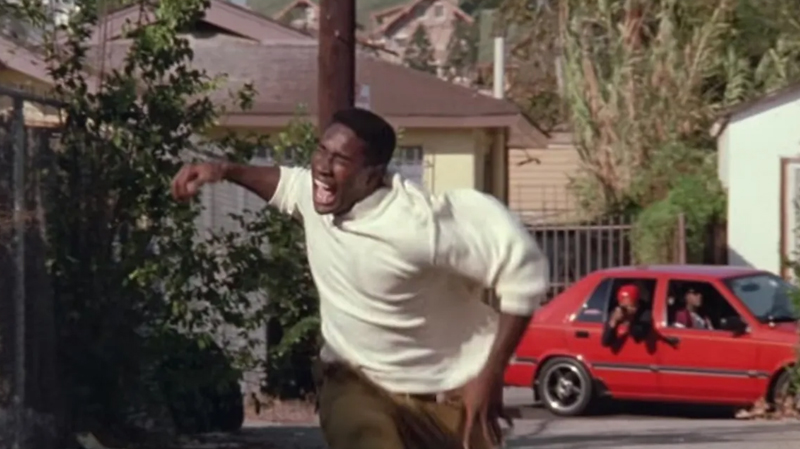 We hope that the characters will learn from this horrible event, but sadly, the speech by Darren ‘Doughboy’ Baker (Ice Cube) to his friend Tre (Cuba Gooding Jr) as they contemplate what has happened and how to move forward suggests that nothing will change, no lessons will be learned, and the same thing will happen again. And then, to end the film, we’re hit with a small, almost matter of fact, caption to inform us that Doughboy did indeed meet the fate he not only expected but accepted as the only possible outcome of his life.

And from an outsider looking in, it all seems so hopeless.

And that is exactly how I felt watching Boyz N The Hood; an outsider. I almost felt that I was not welcome as a voyeur because this story was not created for me. I have no conception of what it’s like growing up with such pressures hanging over my head every single day, or how it feels to have to continually look over my shoulder in case I accidentally upset the wrong person (Ricky’s fate was sealed over something as mundane as a few angry words exchanged over a spilt drink). Singleton himself fought to direct his own script, saying that “I wasn’t going to have somebody from Idaho or Encino direct this movie.” To me, Boyz N The Hood was an entertaining, albeit sad and thought-provoking drama. And I can’t help but feel that that’s the wrong mindset with which to watch this film. Singleton based many of the characters and situations on real people he knew and events he witnessed. Where Do The Right Thing is deliberately exaggerated, featuring cartoonish characters, brightly decorated sets and outlandish occurrences to highlight, how people can overreact and tempers can fray when the heat is (quite literally) turned up, with Boyz N The Hood it’s always clear that we’re watching a slice of real-life unfold and it’s often grim.

I did enjoy spotting one or two references to a film that I know and enjoy very well. Singleton has cited Stand By Me as one of his favourite movies and a major influence on Boyz N The Hood. It first became evident as Tre and his friends go for a trek down a railway to see a dead body – a direct reference to Rob Reiner’s 1986 movie. More subtle a reference is the film’s epilogue, in which we learn about the power of friendship through adversity, and the unfortunate offscreen fate of Doughboy. It definitely put me in mind of Richard Dreyfuss’s voiceover at the end of Stand By Me, in which he also talks about friends, and describes what happened, offscreen, to River Phoenix’s character Chris Chambers – another senseless death. 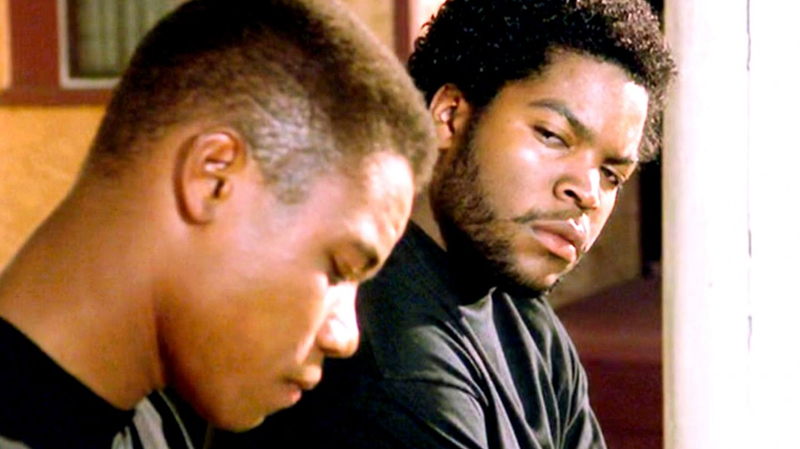 I mentioned before that it all seemed so hopeless. There are, however, flashes of optimism and there is a deep vein of humanity running all the way through the film. At face value, Doughboy is one of the villains of the piece, but there’s so much more to him than the wannabe gangster flashing his piece at all comers. Ice Cube’s performance – his first major acting role – is subtle and nuanced. Equally good is Cuba Gooding Jr as Tre. Although Ricky and Doughboy are central to the film’s dramatic events, the story is told through the eyes of Gooding Jr’s coming-of-age teenager Tre as he learns how to survive and ultimately escape from his life. Fishburne provides remarkable support as Tre’s father Furious, a man of great principles who continually tries to teach his son that the only way for the cycle of violence to stop is for the black community to stop its young people from fighting each other. His impassioned speech against the gentrification of traditional black areas is also another of Furious’s highlights. 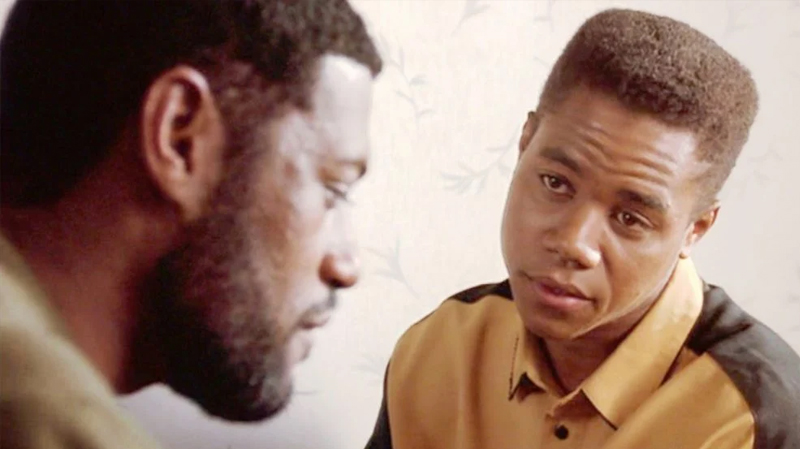 So, Boyz N The Hood was, like Do The Right Thing, another difficult watch and while the two films do have some similarities, there are more differences between the two. Of the two Boyz contains a more traditional style narrative that is easier to follow, but in terms of the content, it’s probably the more real and, because of that, more upsetting.

None of this means that you shouldn’t watch it. It’s also a hugely important movie.

We’ll be back next time because, as always, the #90sMC abides. Our resident dude-ess takes us on a trip, in more ways than one, to 1998 to go bowling with The Big Lebowski. You might not like it but, well, you know, that’s just, like, your opinion, man. 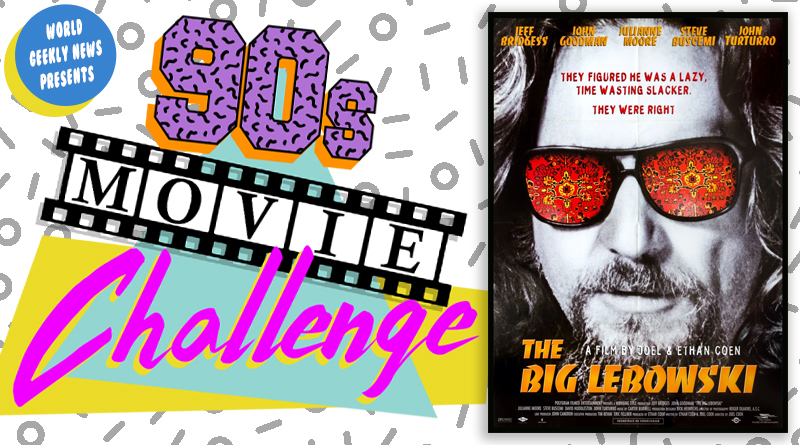 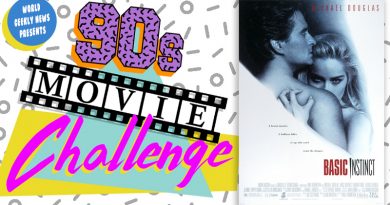 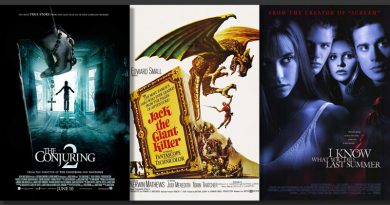