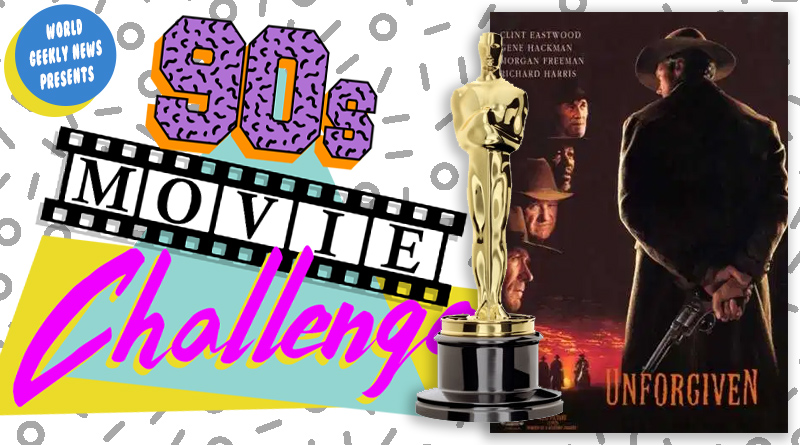 It’s #90sMC time again where we go back to the 1990s to examine the fifty greatest films of that decade. This week, in the last of our special Oscar-Winner’s editions, Stuart Ball saddles up and rides into 1991 to talk all about Clint Eastwood’s western masterpiece Unforgiven.

Now, show us the Munny…

From the outset, let me make a confession. Maybe not a confession – more a small but important announcement. I am a huge Clint Eastwood fan. A fan of the man, the actor and the director. However, that does not mean I would not be critical where it is warranted – just don’t expect much, if any, during this article. I truly believe that Unforgiven is a masterpiece – both of the genre and of film overall.

The opening shot of Unforgiven is one of the most heart-achingly beautiful in all of cinema. Its astounding splendour serving as a counterpoint to the depths of darkness that follow during the course of the film. The fact that this opening shot also shows a man digging his own wife’s grave adds to the melancholy but removes none of the magnificence. 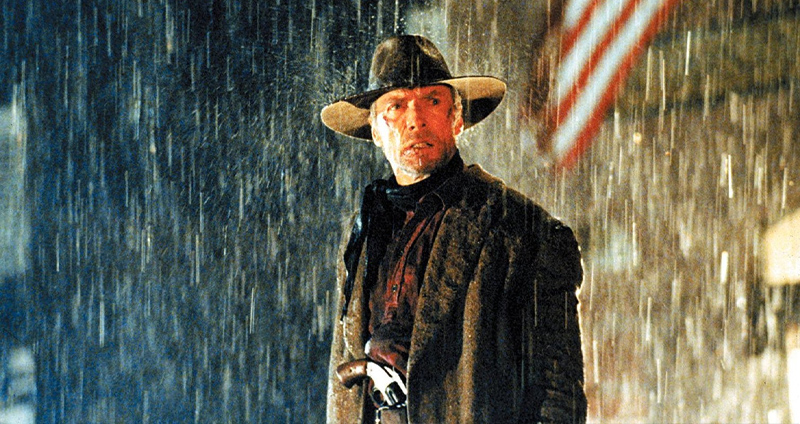 At the start of this cinematic masterwork, there’s an air of defeat about Eastwood’s William Munny. The one-timedark-hearted killer now lives in near isolation raising his two children alone after the passing of a wife who “cured him” of the sins and behaviour of the past. While his existence is a tough one, it is also a life with which he can cope, with which he can leave behind the man he used to be. A man changed by a loving wife.

Unforgiven was made at a time when it seemed that Eastwood may never make another western. Although it was only 7 years since the release of the excellent Pale Rider, the timing of the making and release of Unforgiven is one that may have baffled some critics but Eastwood knew exactly what he was doing. He had long since held on to the script (by David Webb Peoples) until he felt he was at an age that would best serve the part, the film and the story to be told. The fact that this, Eastwood’s tenth western, was also to be his last may have contributed to this being one of his best.

The opening act of the film clearly establishes that Munny is far from the lean, blood-hungry man he once was. He wrestles with ill pigs on his farm and ends up face down in the mud. He fires his first shot in years and cannot hit a target without resorting to using his shotgun. However, there’s a classic moment of “Eastwoodness” in the opening minutes. His “Say what?” response to the Schofield Kid’s, “You don’t look like no rootin’ tootin’ son of a bitch and cold-blooded assassin,” is pure Clint and if I wasn’t hooked by then, these two simple words seal the deal. 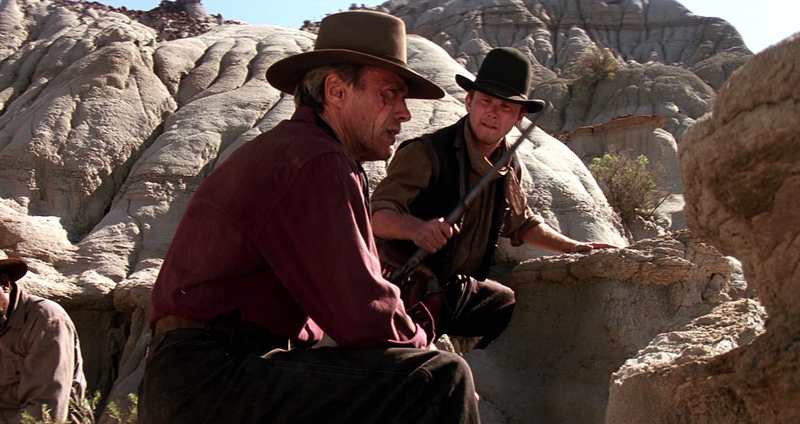 The plot of Unforgiven revolves around the sum offered by a group of prostitutes following their outrage over the punishment given to two cowboys for the disfigurement of one of their number. Little Bill Daggett (the excellent Gene Hackman) seems more than a little reluctant to hand out a more severe punishment to the pair than handing over some of their horses. This reluctance to punish those he knows seems to be at complete odds with the brutality shown later in the film. Daggett is a character that targets his hate, his anger and his viciousness. There are some moments of comedy with the film, all of which are well-judged but make no mistake, Unforgiven is no episode of Bonanza.

Each member of the ensemble in Unforgiven is perfectly cast. Casting director Phyllis Huffman had worked on several Eastwood films before this one and continued to do so for many years. The smallest of parts has been given every consideration and while the leads are all phenomenal, so too are the vital supporting roles. Richard Harris plays the part of English Bob with glee and the ruthless beating he receives at the hands of Little Bill appears all the more malicious because of it. Eastwood surrounded himself with masters of their art behind the camera and the work of Director of Photography, Jack Dean, is a joy to behold. Editor Joel Cox won a well-deserved Academy Award. 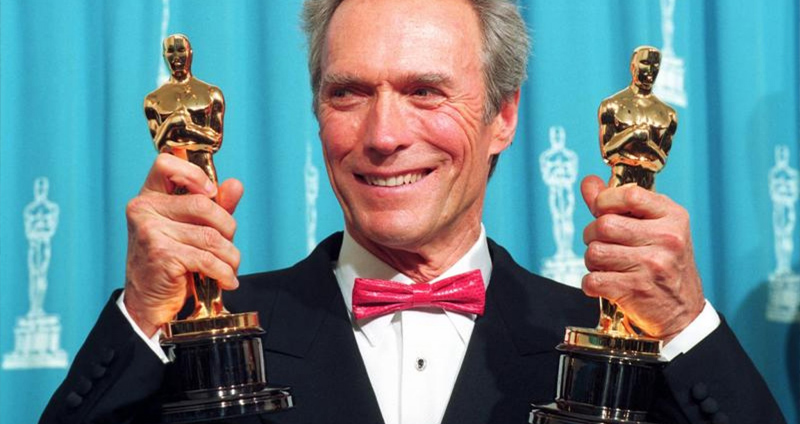 I vividly remember my first viewing of the film at a cinema in London. The Eastwood fan in me wanting it be great and then the film fan in me realising this was not only a remarkable revisionist western but truly an outstanding film. No doubt it’s a film for fans of the genre but it’s justly an Oscar-winning film for fans of film full stop.

Eastwood created a magnum opus which is uniquely entertaining and thoughtful. There is a feeling of vulnerability to his character and that of Morgan Freeman’s. Ned Logan realises he is not the man he used to be and his departure from the trio he formed with Munny and the Schofield Kid is his undoing. There is even a sense of disillusionment, disappointment and disenchantment in this realisation. He wants to be that man again but the feeling is denied him. 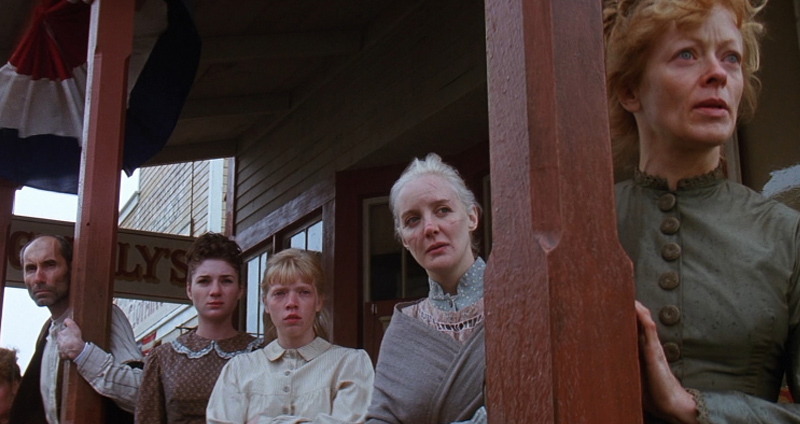 This is the strength of Unforgiven. Even Daggett, away from the town at least, is shown to be far less than perfect. In Big Whiskey he is in control; he is the final word in justice. His crude attempts to build his own house symbolising the significant cracks in his own personality. Eastwood doesn’t play Munny like the hero of his previous westerns but like the man he is. One who is desperate; one who needs the money for his children and his pig farm ravaged by a fever. Munny himself is subject to a beating from Little Bill and is left crawling on the ground once again, mirroring the positioning he found himself in back on his farm. Eastwood’s character has to work for the revenge he ultimately takes and we wonder if he will survive his own fever.

Eastwood could not have made this film 20 years earlier and the age at which he played the character was perfect. Not so young that we would have doubted his lack of skill or strength and not so old that we would be hesitant to believe in his ability to survive the climactic showdown. 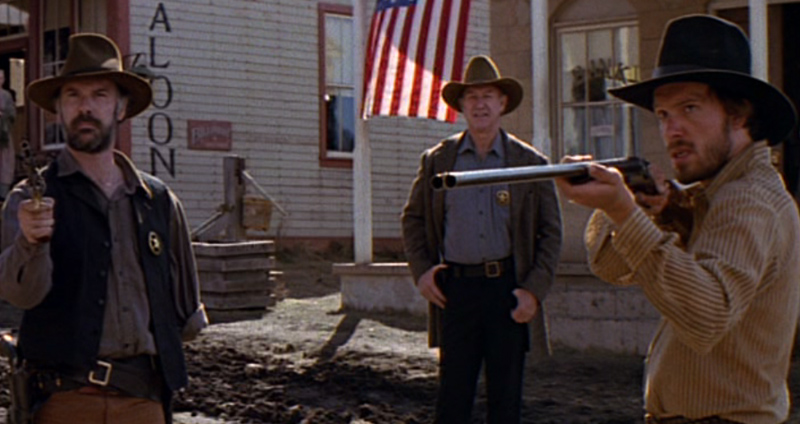 The veteran director knew this would be his last western and Munny’s departure from Big Whiskey not into the sunset but into a torrential downpour perfectly encapsulated the film’s black heart. We may never see the like again….

Join us next time as KJ McDougall takes us on a trip to a long time ago (1999) in a galaxy not-so-far away (this one) to look at one of the most hotly anticipated films of the 1990s – Star Wars Episode I: The Phantom Menace.

Be here next Friday – and May The Seventh Be With you! 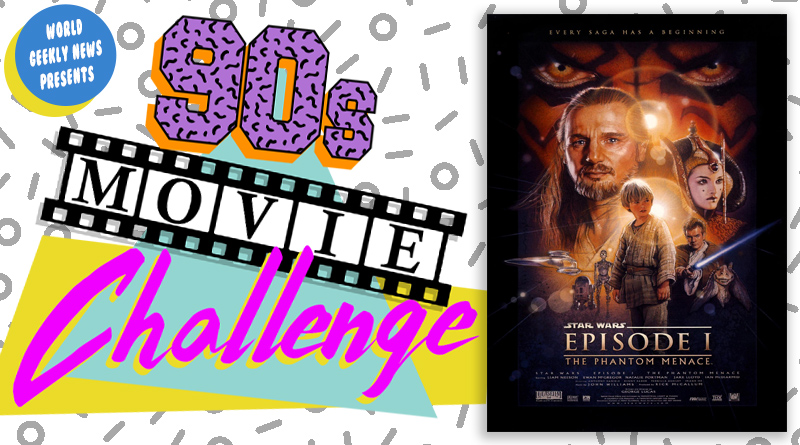 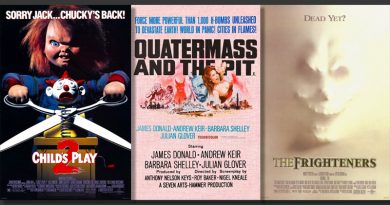 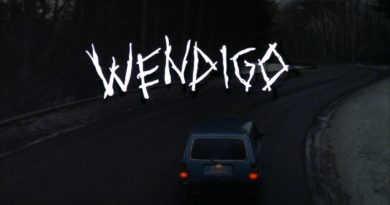 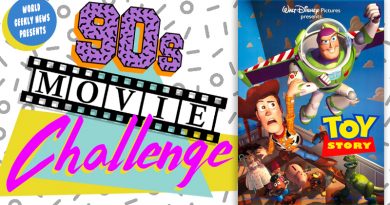