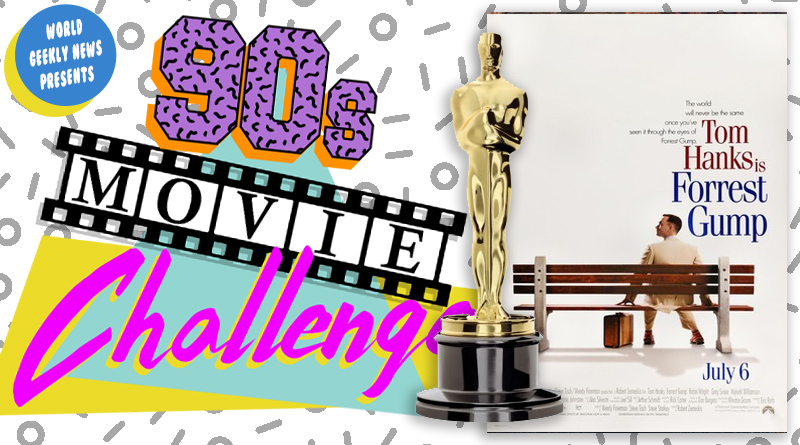 Welcome back, pals. This week’s #90sMC, which takes us back, way beyond the 90s to most of the major world events of the 60, 70s and early 80s, is a very special guest post courtesy of our friend, the brilliant Clair Budd.

As the Awards Season is now upon us, so begins our look at four winners of the Oscars’ Best Picture gong, and this week, from 1994, it’s Forrest Gump!

I’ll begin with a confession- although Forrest Gump was released in 1994, I didn’t actually see it until I bought it on VHS in 2000, so if that makes my experience of Robert Zemeckis’s film slightly less authentically 90’s than it should be, I apologise in advance. It remains a firm favourite however, which is why I jumped at the chance to write a review.

What I didn’t realise is that the offer to direct Eric Roth’s adaptation of Winston Groom’s novel initially went to Terry Gilliam, and that John Travolta was one of the actors who passed upon the lead role. I like to think that somewhere out there in the multiverse this alternative take actually exists, because I would watch the hell out of it.

Plot-wise I probably don’t need to provide much of a run-through, but the story centres on Forrest Gump (played by Tom Hanks), a man of below-average IQ who, as he sits on a bench at an Alabaman bus stop at an unspecified point in the early 1980s, relates his life story to the other waiting passengers. Depicted cinematically through a series of flashbacks, and what was for the time ground-breaking use of CGI techniques, we see Forrest witnessing (and frequently influencing) many of the pivotal moments in 20th century American history. These include showing Elvis how to dance, inspiring John Lennon to write “Imagine”, and making the phone call that ultimately alerts the police to the break-in that prompted the Watergate scandal. Against this backdrop, Gump tells two important stories: his emergent friendship with his Vietnam platoon leader Lieutenant Dan Taylor (played by Gary Sinise) and his love for his childhood friend Jenny Curran (Robin Wright). 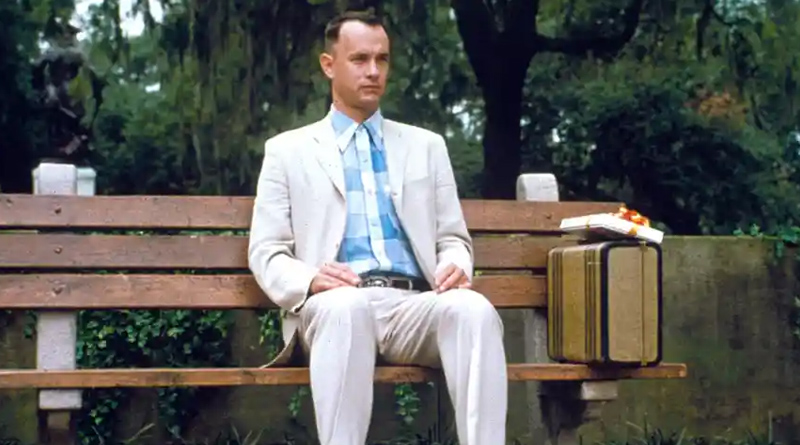 The film begins in 1950’s Alabama, where Forrest is being brought up by his mother and black maidservant in a boarding house. Gump senior has clearly abandoned his wife and son (perhaps, although it is never explicitly addressed, because of Forrest’s learning disability), and his mother does her best to ensure that he is enrolled in a mainstream school, despite having an IQ of only 75. That her being required to sleep with the Principal is the price for Forrest’s admission is something that the boy is, on whatever innocent level, somewhat aware.

Gump also has the physical disability of scoliosis to contend with, and as a child he suffers the indignity of wearing leg braces. We see the influence of his mother again brought to bear as she helps him to cope and encourages him to be strong: “If God had meant us to be the same, he’d have given us all braces on our legs”. The braces do their job however, and in the fullness of time Forrest discovers that he can run. A fluke (the first of many) brings him to the attention of a college football manager, and he is awarded a sports scholarship to Alabama state university. Upon graduation he enlists into the army and is promptly sent to Vietnam, which initiates a series of further adventures through the 60’s, 70’s and early 80’s. 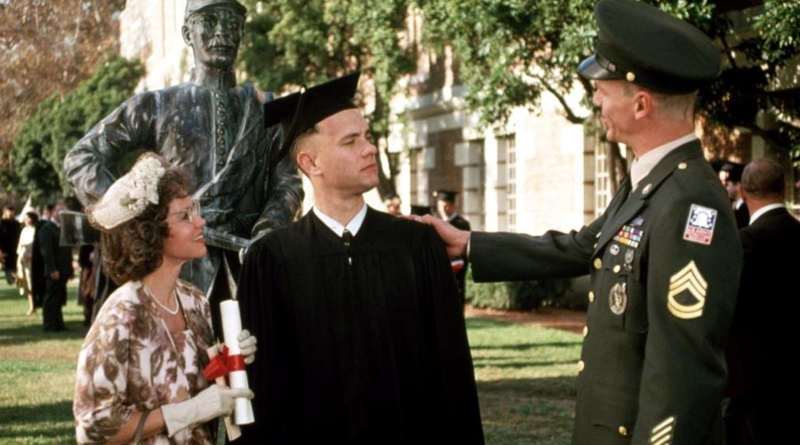 It strikes me that the film shares many tonal similarities with its television antecedent The Wonder Years, calling upon the same musical and visual touchstones to connect with a Boomer generation anxious about rapidly accelerating social change and nostalgic for a past that never existed. It is in this sense that Gump’s portrayal as an “everyman” who is unremittingly optimistic about his future and open-hearted enough to believe in the American dream, despite (or perhaps, because of) his intellectual challenges, played directly into the hands of the political right; the Gingrich Revolution and Bob Dole’s presidential campaign both drew upon a socially conservative interpretation of the film’s narrative. The intertwining biography of Forrest’s sweetheart Jenny Curran here provides a bleakly nihilistic view of the countercultural movement of the 1960’s and 70’s, serving for many as a cautionary tale of the dangers of left-wing ideologies. 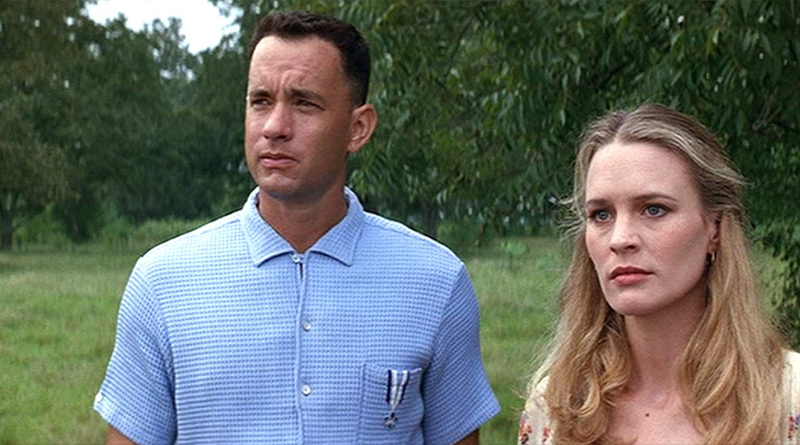 This, for me, makes Jenny by far the most interesting character in the film. We are encouraged to view her as a fundamentally broken creature, a misfit due to the appalling abuse she suffers at the hands of her father and who clings to Forrest when, like her, he is shunned by his classmates. Whilst a series of happy accidents serve to launch Gump from one adventure to the next, we see Jenny make a succession of destructive “choices”; the first of which shows her posing in Playboy whilst wearing her college sweater (no mention of why this friendless, impoverished girl might have needed the money), which then leads to her performing in a strip joint, homeless on the streets of San Francisco and more mistreatment at the hands of boyfriends who beat her whilst feeding her LSD and injecting her with heroin, played out to a soundtrack of Joan Baez, The Doors and Lynyrd Skynyrd’s “Freebird”. Hardly subtle. 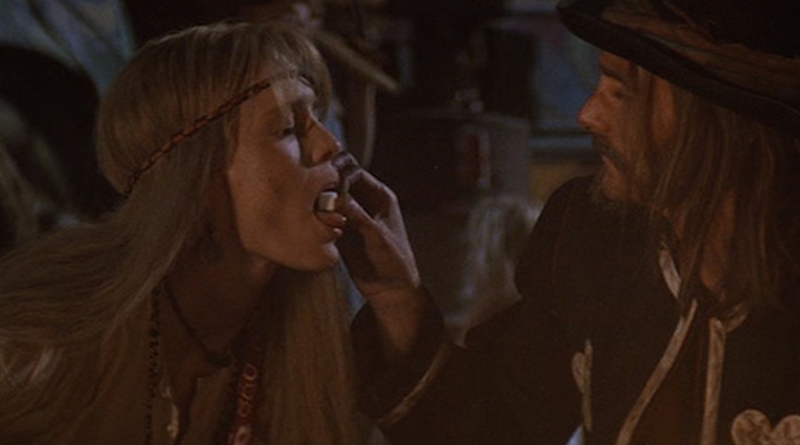 Add to this the mysterious “sickness” that eventually kills her. Apparently, Groom intended the illness to be hepatitis C, but everybody I know (myself included) saw it as HIV/AIDS. Watching the film as someone whose adolescence was played out against the backdrop of the moral panic that accompanied the outbreak, the narrative was clear- Jenny was reaping the consequences of her own bad decisions. As an aside (and I can’t have been the only person that this thought occurred to) the film gives no consideration to the fact that Forrest himself has been exposed to this deadly virus. Because- you know- only bad people catch STIs.

Poor Jenny can’t win, can she? When she rejects Forrest’s proposal of marriage, we feel sorry for him. Yet when she tells him that same night that she loves him, we feel troubled that she sleeps with him because of the disparity between her intelligence and his childlike simplicity. The fact that she then becomes pregnant only adds another layer to the complexities of their relationship.

Gump is, almost from the outset, presented as a saviour: when he goes to visit Jenny in college, we see him “rescuing” her from an overeager lover, and again from the hecklers in the strip club where she is performing naked on stage. On both occasions Jenny is angry with him for his intervention: “You can’t keep doing this, Forrest”. It’s clear that although she appreciates his concern, she also wants to live in her own way and there’s no question of her settling for the life of quiet domesticity that Forrest would clearly prefer (“I think you should come home to Greenbow Alabama”). This isn’t the only “saving” that Forrest does, of course. He is awarded the congressional medal of honour for single-handedly evacuating his entire platoon from a Viet Cong ambush, including his “best good friend” Bubba, who tragically dies in his arms, and of course Lieutenant Dan, who in the process is horrifically maimed by the loss of both his legs. 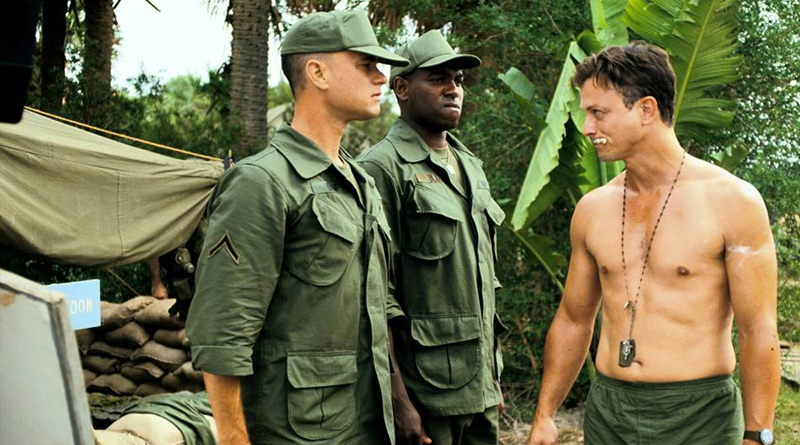 It is possible however to identify a deeper and more subversive narrative at play. Forrest doesn’t, I think, see himself as a saviour. He thinks only of the people that he loves and how he can prevent them from coming to harm. That this is a deeply paternalistic (and at different points both unwittingly misogynistic and racially tone-deaf) perspective are for me summed up very explicitly in one key scene. Following the death of his friend Bubba in Vietnam, Gump honours the promise he made to him by setting up a shrimping business in Bubba’s home town of Bayou La Batre (with Lt. Dan on the way agreeing to become Gump’s first mate). Bubba’s family is incredulous that a white man with no previous fishing experience can make a success of it, and initially they are right. However, taking on board some facetious advice that he’d better start praying, we next see him, faintly ridiculously, as the only white face in the back row of a black gospel choir singing along in the hope of divine intervention.

This moment, amongst many others, brings home the fact that Forrest is a sincere but unreliable narrator. He tells his own story as he sees it, although that is not necessarily what we, the viewers are expected to conclude. Several critics have observed that the film’s depiction of 1950’s Alabama, for instance, is whitewashed in its most literal sense- there isn’t a single marker of racial segregation to be seen. In my view this misses the point- the Alabama of Forrest’s childhood is whitewashed because Forrest is himself colourblind. Moving forward in time, his failure to recognise the racial slur c**n when he witnesses George Wallace’s 1963 “Stand in the Schoolhouse Door” stunt. demonstrates Gump’s oblivion to the political significance of the moment; later, on when sent to military boot camp in preparation for deployment to Vietnam, we as viewers note the disproportionate number of black and poor white enlisted men even where Gump doesn’t [1] And most noteworthy, and I believe, not meant to be taken at face value, Forrest’s trivialising of the black activist struggle with his infamous comment “I’m sorry I had a fight in the middle of your Black Panther party” mostly, I feel, conveys the message that you’d have to be intellectually challenged to fall for the white revisionist account of this moment in history. 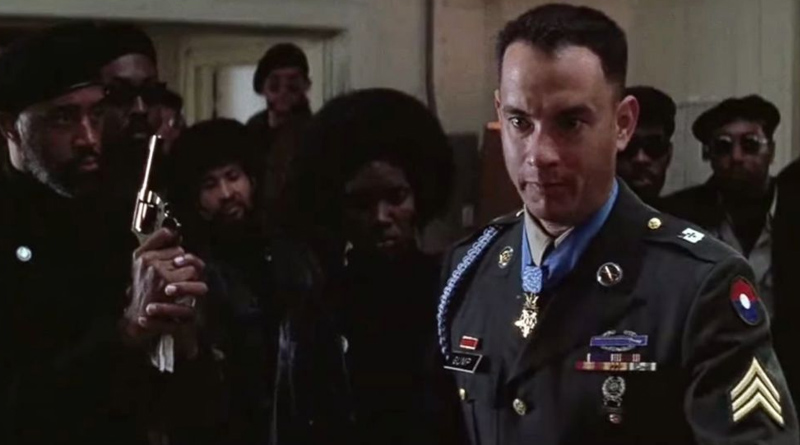 Punctuated by a series of assassination attempts (specifically Governor George Wallace, JFK, Robert Kennedy, John Lennon and Ronald Reagan), with each marking a point of transition to the next stage of Forrest’s journey, the film’s graphic portrayal of violent individualism therefore highlights how chance or random actions can have far-reaching consequences. This is essentially the crux of the film’s narrative, articulated of course through its famous strapline- “Life was like a box of chocolates. You never know what you’re gonna get”. The film’s concern with destiny vs chance (or are they, ultimately, the same thing?) in this respect then, invites us to discard the notion that Gump’s living out of the American Dream is a consequence of his innate goodness, because his breaks turn as much upon the roll of the dice as Lt. Dan’s or Jenny Curran’s. Or, to put it another way, and in the words of one of my favourite lyrics:

Whatever you do, don’t congratulate yourself too much
Or berate yourself either
Your choices are half chance, so are everybody else’s [2]

[1] The boot camp section of the film is also interesting in the context of its narrative callbacks to Kubrick’s Full Metal Jacket (1987). We can contrast the intelligent anti-war Joker who becomes a correspondent for Stars and Stripes, with Gump’s politically naive telling of his own story. 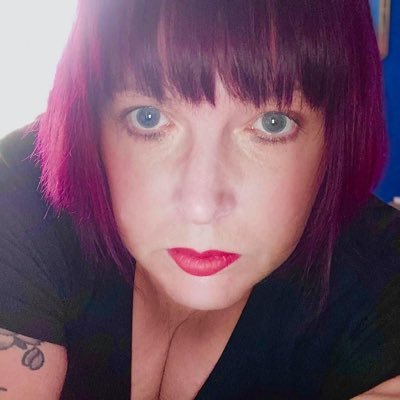 When she’s not tweeting about repeats of Top of the Pops and Upstairs Downstairs, Clair spends her time researching the novels of Terry Pratchett and Neil Gaiman for her PhD.

She also confesses to having an unhealthy obsession with 1980s Hair Metal.

You can follow her on Twitter under the name @BuddClair and read more of her writing on her Medium page at https://clairbudd1.medium.com/.

Can you believe that we’re almost a third of the way through our 90s odyssey? But that’s just the tip of the iceberg, as we’ve got plenty of other great films throughout the year. Come back next week as our very own King of the World (he wishes, Ed.) Paul Childs takes a look at a film that held onto the title of Biggest Selling Movie of All Time for over ten years and still remains in the top three to this day. 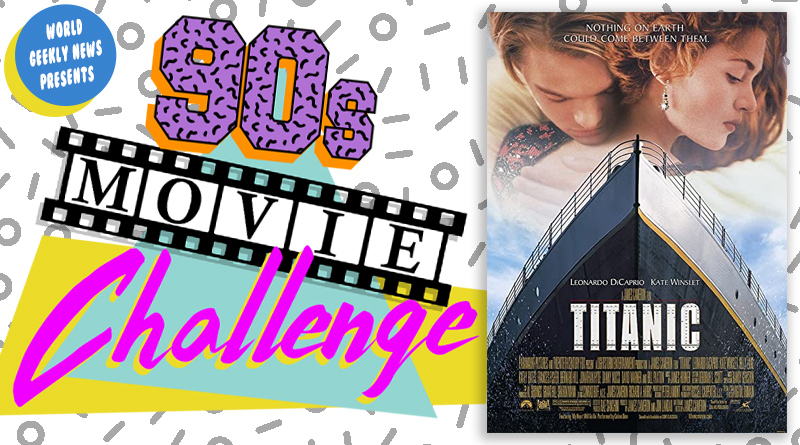 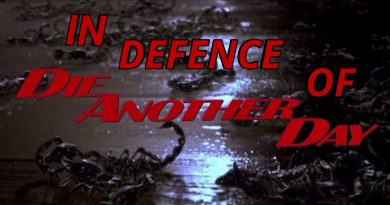 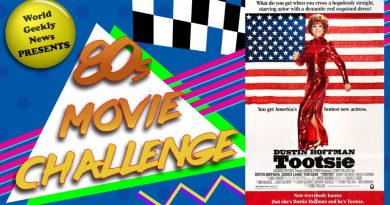