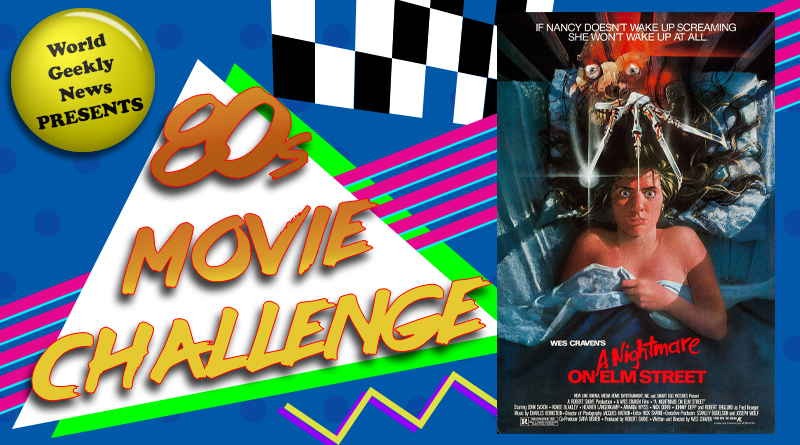 Welcome back, 80s Movie Ghouls! We continue our #80sMC/#31DoH crossover by staying in 1984 but moving away from the big city of Ghostbusters for suburbia. After hitting the Red Bull and Pro-Plus, Chris Lupton tried to stay awake but couldn’t quite avoid A Nightmare on Elm Street!

“One, Two, Freddy’s coming for you… Three, Four, better lock your door…”

Nightmare on Elm Street (1984) has cemented itself into the hall of horror classics, but I’m not quite sure why. A 2020 first time viewing of this 1984 Wes Craven teen slasher has perhaps given me an unbiased critique of what is essentially a sloppy horror flick, with some insane pacing and horrendous acting. It did a couple of things well, but I’m afraid to say if you’re a fan – this review might rub you up the wrong way… let’s get started.

Now, this may be a first time viewing, but I’m not completely in the dark on the subject matter in hand. Let’s go back to my early childhood, circa the turn of the 90’s, where my first memory of A Nightmare on Elm Street stems from a rental copy that my older siblings had left in the VCR player for me to discover the next morning. I vaguely recall the cackling figure of Freddy Krueger, burnt and disfigured, tearing towards the screen.

From that moment on I became traumatised, with even the sheer picture of Freddy Krueger himself (Robert Englund in his defining role) being enough to send me into convulsions of hysterical tears (I was a wimpy child, ET and the Elephant Man were enough to send an inconsolable me to the safety of my parents’ scissor-free arms).

This terror was only exacerbated by a creepy attic hatch in my Aunts house, which my older cousins had dubbed as ‘Freddy’s room’, adorning the door with a large poster cut-out of Krueger’s famous face and glove. It still gives me the creeps 30 years later just thinking about it. Peter and Steven; if you’re ready this, thanks for the memories.

So it’s fair to say I was geared up for a ‘Fright Night’, ready to face my fears in my first ever viewing (even Mrs Lupton joined in, more on her opinion later…), but oh – time has not been kind to Freddy Krueger’s maiden outing.

The film opens without any mucking around. It’s an accelerating/out of control sequence of dream-induced murders and sleep avoidance tactics, where a group of 4 teenagers are picked off at breakneck speed (one, quite literally) leaving the final remaining contender to face Elm Streets antagonist, Freddy Krueger all alone.

It’s in these last few moments that I’m thoroughly confused. The plot’s lost on me by that point, our heroine’s objectives thin and unclear. I could follow Inception without issue, and the Matrix was a cinch, so why’s this troubling me so much?

It’s because of this that the film has an issue with two things; the dialogue, and the pacing. For a film with not much content, it seems to do the unimaginable trick of packing little in at such an incredible speed (at a whopping 1hr and 30mins). What then happens is you throw in some awful soap-opera era dialogue (more on the acting shortly), and you’re left to deal with a plot that means well but performs little.

Technically, the film averages in its direction and production. The gore is fairly abundant and limits some of the big hitters as a couple of cleverly shot scenes (our opening kill being dragged up the wall and across the ceiling; a technique used again later for a gruesome ‘blood exploding out of the bed’ sequence, shot presumably by simply rotating the set giving the impression of gravity-defying gore).

I do wonder though if there was much of a budget for this film (apparently there was – $1.8 million – did they have really expensive cast lunches or something?), as they seem to cycle between 4 sets on repeat; Freddy’s dreamscape boiler-room lair, the school, the police station and the small leafy street in which our protagonist teens reside. By the third visit to Krueger’s boiler-room hell, the horror has been completely lost for me as I know exactly what’s going to happen before it happens (Freddy will pop up out of nowhere or lurk in the shadows, scratching his menacing scissored glove along a pipe whilst puffs of steam bloom into shot, attempting to creating an atmosphere of suspense).

Now it can’t all be criticism. Underneath my caustic and cynical reviewer glare, one technical aspect I’d like to applaud the crew behind Nightmare on Elm Street in is in Freddy Krueger’s ghastly appearance. This is one of the things that is done so well; the prosthetics and costume on this hideous ghoul are so different to anything that was floating around at the time (a drastically burnt man with a beaky, rotting face and signature scissor fingered glove), the film and its main antagonist were bound to become a classic for that alone.

A little look at the cast now reveals a largely unknown group of actors for the time (although a nubile and budding Johnny Depp – before the ravages of ‘Hollywood… cough cough’ got to him). It’s no wonder to see why Depp’s such a good actor, as his onscreen presence always seems to outdo that of his fellow cast members. As I mentioned before, the dialogue in this is astonishingly bad. There’s exposition galore, and a backstory so fleetingly provided, it’s hardly worth paying attention to. This, however, gives the film something I wasn’t expecting; retro charm.

It’s quite clear that Nightmare on Elm Street holds a classic ‘dawn of the teen slasher era’ appeal about it that is clouded by rose-tinted specs of nostalgia for original viewers. Even a modern viewing of it can give you some appreciation to a degree to understand that it would have had an appeal for teens of the 80’s in the wake of Halloween (1977) and Friday the 13th (1980), but unfortunately for me it was a flat out dud.

Now I’m clearly in the minority here; the original release netted an astonishing $57 million dollars worldwide (I know, that’s probably the scariest thing of all, right?) – and spawned no less then 9 sequels (I could be wrong there, but this is what Google says, and Google’s rarely wrong…). This alone just goes to show that A Nightmare on Elm Street was a resounding success, so what do I know?

To close this review of an 80’s horror classic, a few quotes obtained by my co-viewer, Mrs Lupton (the wife, not the mother – Mrs Lupton senior wouldn’t even allow a VHS copy of The Exorcist in the house…);

Thanks Chris! We won’t sleep after that!

Join us again next week for more horrifying #80sMC/31DoH mischief as returning guest poster CJ Dee takes even further back in time to 1981. Along the way, she’ll take us out of the city, beyond the suburbs, way out into the countryside and a certain cabin in the woods to meet The Evil Dead! 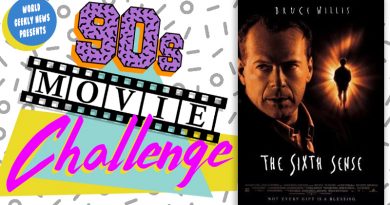