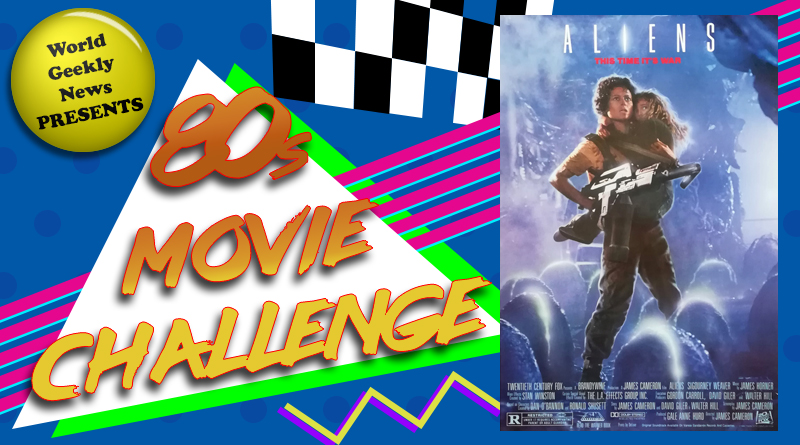 Welcome back 80s fans! Stop your grinning and drop your linen (Actually, no, don’t do that, Ed.) and prep for dust-off as we bring you another nostalgic ramble about one of the most quotable films of the decade. Sit back and enjoy the express elevator to hell, going down, as Paul Childs tells us about his memories of seeing one of his absolute favourite films for the first time.

It’s the only way to be sure.

There are certain days in your Personal Film History that you always remember. Your first trip to the cinema; the first time you saw Star Wars; the first film you went to see twice at the cinema; your first date to see a movie with someone you fancied (which for me was The Living Daylights and you can read all about that, inexplicably, in my write up about The Lost Boys); the first time you secretly watched a horror film you knew you shouldn’t be watching; and so on.

The day I first saw Aliens is one such day.

In many of these look-backs, I’ve talked about my schoolfriend Mez and how he introduced me to a whole variety of films in the 1980s, many of which went on to become firm favourites. Well, one particular night in 1989 he was round at my house – we were probably up in my room playing games on my ZX Spectrum or up the field outside the house golfing or kicking a ball about – my mum said she was going to get a film asked if we wanted to come along to help choose.

Thinking about that first question again, it’s not just certain films and moviegoing experiences that stay with you, it’s the places where they happened. The cinema you took that girl or guy to, the bedroom you all crowded around a tiny TV to watch that illicit VHS tape and of course, the Video Store where you spent what felt like hours poring over the blurb on boxes, taking your time to choose the perfect movie for the situation. When I was a teenager our favourite one was Anne’s Videos. It wasn’t the closest to home, but it certainly had the best selection in town.

“You boys pick one, and I’ll pick another and we can have a film night,” my mum said on the shot drive there.

“I’ve got one or two suggestions myself,” said Mez.

After ten minutes or so of picking up VHS boxes only to find they were already “OUT”, or just not fancying certain films because I’d seen them before or they just didn’t appeal, Mez ended up handing me a box with a title I’d heard of but had never really been interested in. Some film with her out of Ghostbusters on the front holding a big gun.

“Er… no,” I said, suddenly ashamed, thinking maybe I ought to have. I was certainly familiar with the imagery of one, particularly famous scene.

“Doesn’t matter. This is the follow-up, but this time there are loads of them instead of just one. You’ll love it!” he said.

Trusting that Mez had previously turned me on to Robocop, Beverly Hills Cop and The Terminator, I said “OK,” and took the box to my mum (I didn’t have a member’s card at this point, although I soon would when I turned fifteen the next year and they introduced the Young Members Club.

“Have you got anything yet?” I asked my mum as I handed her the box.

“Not yet,” she said. “Nothing’s taking my fancy tonight.”

“Try this,” Mez said, handing her a box.

She eyed it up, read the copy on the back and said “Are you sure? Doesn’t sound like my usual kind of thing.”

“I’m trusting you on this, Mez,” my mum said. And hired the two films.

That was the night I saw Aliens and Lethal Weapon for the first time. What a night – two great films. Mez was right; my parents liked Lethal Weapon so much that they bought themselves a copy – and I loved Aliens so much that I bought it for myself and Ridley Scott’s original. For a while, I’d say that it was definitely my favourite movie, but as you’ll probably understand if you love and watch a lot of films, that accolade can change depending on your current mood. I wrote about the same thing last week when I talked about the time I taped The Blues Brothers off the TV.

In that piece, I also talked about something that, for me at least, will always link Aliens and The Blues Brothers. For my 4th Year art mock exam, I did a portrait of The Blues Brothers. My art teacher Mr Chambers said it was good but told me to consider moving away from pop culture references going forward; advice I soundly ignored for my GCSE Art final the next year (and still disregard to this day, almost thirty years later). You see, at this point, Aliens had undergone something of a refresh in my Personal Favourite chart, thanks to the recent Special Edition release on VHS just a few months earlier. On top of that, I had a poster on my bedroom wall – remember going down to WHSmiths, John Menzies, Woolworths or Athena to flick through the posters? Some people had their favourite footballers and pop stars, or that sensitive dude holding the baby, the tennis woman scratching her bare arse or that black and white muscly fellow with motorcycle tyres… well this is what I had:

Guess what I put in my final exhibition?

Like my Blues Brothers portrait, my Xenomorph work was large – about three feet or more high, it was charcoal on paper, and like that Jake and Elwood picture, I was pretty proud of it. It looked awesome. I got a C for Art. Make of that what you will, but I would do it again! I mentioned last week that I regretted throwing out my old artwork from my school days – something I kick myself for every time I think about it. The only drawings I have left over from those days will be highlighted in a regular feature called Felt Trips on Bob Fischer’s Haunted Generation website at some point in the near future – I’ll be sure to link to that article when it goes live.

“But what about the Aliens film?” I hear you ask.

“You’ve rambled on about video stores and school art exams long enough, that’s not what we came here for!”

OK, steady on! I just said I’m getting to it!

So in preparation, the other night I watched Aliens on Blu-Ray. I settled on the 1990 Special Edition from the menu because, while I think it maybe adds a little too much incongruous detail in places, slowing the action down and also maybe even talking down to its audience, it also adds some really lovely character moments and set pieces. In particular, the subplot involving the fate of Ripley’s daughter, Amanda, which gives further insight into Ripley’s maternal instincts. Weighing in at 17 minutes longer than the theatrical release (which is 137 minutes long). When that version came out in 1990, I was already aware of a couple of missing scenes, such as the introduction of the residents of Hadley’s Hope, but I had been looking forward to the restored version of Burke’s demise. It never made the cut, sadly, due to director James Cameron realising that the timescales for the facehugger and gestation of the xenomorph were all wrong.

Sadly, this version remained unavailable until it was featured as a deleted scene in the Alien Anthology box set. Not the box set I own. Never mind, I still got the sentry guns, and that’s pretty awesome. However, I’d still be pretty happy with the theatrical version, to be honest. The character development of Ripley works just fine without the additional stuff – so much so that Sigourney Weaver became the first-ever actress in a science fiction film to gain an Academy Award nomination. At the 1986 Oscars she lost out to Marlee Matlin for Children of a Lesser God but there wasn’t another nomination for an actress in a sci-fi performance for eighteen years when Kate Winslett picked up a nod for her turn in Eternal Sunshine of the Spotless Mind in 2004. Sandra Bullock in Gravity and Sally Hawkins in The Shape Of Water remain, at the time of writing, the only other female sci-fi performances to earn nominations. A winner has yet to emerge.

Aliens did, however, manage to secure two of its seven nominations – Sound Effects Editing and Visual Effects. In glorious HD those effects still look great. The use of practical effects serves the film very well. Take the Alien Queen, for example. A mix of puppetry, hydraulics and costume, the creature was fourteen feet tall, had two people operating it from inside and another fourteen on various puppetry rods and hydraulic controls. All shots of the Queen in the film were achieved in-camera without any stop motion or CGI. For a small number of long shots, a miniature was used, but other than that, it’s Stan Winson’s full-size puppet that we see on screen. 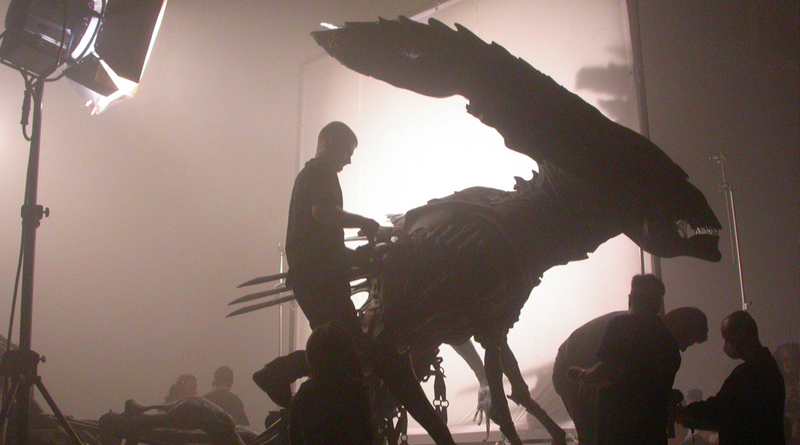 Preferring to work in his own workshop, Winston created a mock-up version in the United States in advance and, rather than fly the model over to England for the shoot at Pinewood, he built the final version with a British team. For the smaller drone aliens though, for movement shots, they were purely costumes filled by dancers and stuntmen and for close-ups and scenes of destruction (such as limbs being shot off) several eight-foot-tall mannequins were used. A mix of titanium tetrachloride, cyclohexylamine, acetic acid, and yellow dye was used for the alien blood and gore. That particular mix created the smoking, burning effect required to convey the high-acidity of the blood without actually putting any of the cast or crew in physical danger!

But it’s not just the effects which make Aliens such a brilliant film for me, it’s the fantastic cast, their relationships and interactions, from Carrie Henn’s Newt, via Bill Paxton’s panicking Hudson to the slimy, sleazy Carter Burke (Paul Reiser). The cast enjoyed a strong camaraderie with Weaver bringing a bouquet of flowers for any actor who was set to film their character’s exit that day. Of the day of Burke’s demise, Weaver said “It was fun giving Paul Reiser his bouquet, I just gave him a bunch of dead flowers.”

On the last day of shooting, Weaver gave Carrie Henn (who never acted again after her debut in Aliens) a personalised photo frame which Henn, to this day, keeps a photo of the two of them in.

If you visit my Letterboxd profile, you’ll notice that Aliens sits proudly at the top of the page in my “Favourites” section. You only get to choose four. With such a limited number, it can be like Sophie’s Choice, but for me, Aliens will always have a place there.

Remember to swing back around here next week as our very own Ultimate Movie Geek Nathanial Jepson will be exploring the long-forgotten catacombs of 1981 for treasures when he looks at the first adventure of one of the 80s – or any other era in fact – greatest heroes; Indiana Jones in Raiders of the Lost Ark!