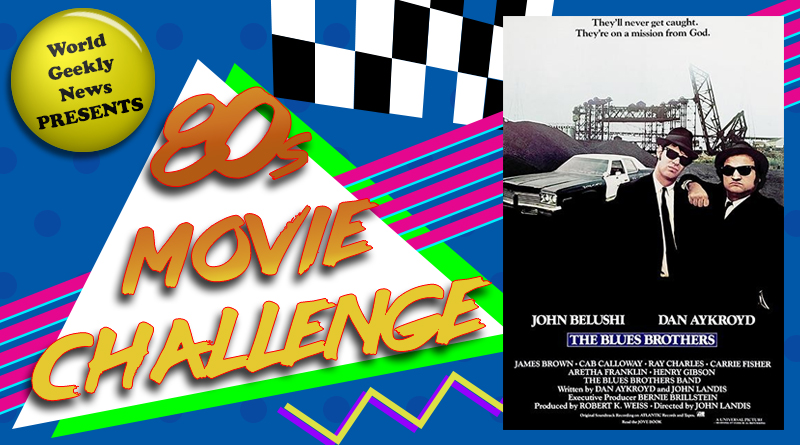 It’s 80s time again, nostalgia hounds. Now, some might say that our 80s Movie Challenge (#80sMC) is a vanity project but to that, we say, well, that they’re probably right, but this week, for one night only, we’re on a mission from God as Paul Childs remembers why he loves 1980’s musical comedy adventure so much. That’s right – it’s The Blues Brothers!

I’m often asked what my favourite movie is and, as many film fans will say, I don’t have a definitive answer for that. It depends on a number of things going on in my life at that precise moment. Sometimes it will be Star Wars, another time it might be The Terminator or Fright Night. But if you had asked me for a brief time in my mid-teens I would most definitely have said that it was The Blues Brothers.

I’ve mentioned my friend Mez a few times before in these look-backs (and will again next week) as he’s responsible for me seeing a number of great films. During the summer holidays of 1989, August I think, he told me that film I’d never heard of called The Blues Brothers was going to be on TV later that week and I should really tape it. Then he started going on about a mission from God. I had no idea what he was talking about, but having recently saved up my Saturday job money for a VHS player in my room, I could tape anything I wanted (and often did), so decided to give this a shot. I taped a lot of crap back in the day so wasn’t expecting much.

But then I watched it.

I had never seen anything like it before. Was it a musical? A screwball comedy? An action-adventure? It was a bit of all of that – and its humour was right up my street. I watched the film a few more times, having loved it so much and really got the script and the song words inside my head. Rewatching it again the other night for the first time in a good few years, I still know all the lines and story beats off by heart – it was very much a comfort-watch.

It was April 1989 when I bought my very first home movie (The Terminator, which I wrote about all the way back near the start of our 80s Movie Challenge) and as the year went on I had started to build up quite a collection of VHS tapes – some bought and some taped off the TV. However, I was devastated to find that my parents had taped over The Blues Brothers so I cycled up to town to get myself a copy. After visiting all my usual haunts (John Menzies, Woolworths and Our Price) I discovered that the film wasn’t actually available to buy in the UK.

This was TERRIBLE news!

Feeling dejected I went to Discovery Records to get something to cheer myself up. I wasn’t sure what it would be yet, but one of the first things I saw as I walked into the shop, was a cassette of the soundtrack album to the very film I hadn’t been able to acquire.

This was GREAT news!

I popped it into my walkman and listened to it all the way home. It’s such a good album – one of the best I’d argue – and it’s one of the film’s greatest strengths. Dan Aykroyd and John Belushi really do perform those tracks. In fact, the band was formed long before the inception of the movie, as a regular musical skit on Saturday Night Live. Aykroyd and Belushi bonded over old records in the jukebox of a club Aykroyd owned at the time, and where SNL cast members often socialised after the show.

After John Belushi became a hot property following his turn in National Lampoon’s Animal House and achieving the rare feat of a top film, TV show and music album in the same year, a bidding war for the rights to make a Blues Brothers film broke out between Paramount and Universal with the latter winning out. Aykroyd was asked to write the film and produced a document that was over three hundred pages long – three times the usual size for a Hollywood screenplay. Director John Landis took two weeks to get the screenplay down to a workable size.

So, going back to 1989, I had the soundtrack album on almost permanent rotation on my walkman (aside from during school hours of course). I remember walking around the school with the tape in my pocket when a kid named David, who was one of the bad lads, walked up to me and said: “I didn’t know you smoked”.

“Smoke. I didn’t know you did. What you smoking?” he asked, pointing at the telltale rectangular shape protruding through the fabric of my standard-issue school uniform trousers.

“Oh! This?” I said, pulling The Blues Brothers tape out of my pocket.

I got called a few names that I can’t really repeat here, I can tell you!

The line-up on that album, that from the show and the one featured in the film were not quite the same. Due to touring commitments, Schaffer was not able to appear in the film so was replaced by the actor Murphy Dunne. Dunne toured with the band after the release of the film. Saxophonist Tom Scott and drummer Steve Jordan bot played on the soundtrack album but did not appear in the film. The drummer was played by Willie Hall from Isaac Hayes’ band and The Bar-Kays.

It was the first time I really paid attention to Soul Music. A year later the release of The Commitments (and its excellent duo of soundtrack albums) would compound that interest.

Once a year, around Christmas time, my secondary school would hold a pair of shows called The Student’s Revue and Teacher’s Revue. These events were an opportunity for pupils to show off their talents and for the staff to make a bit of a fool of themselves. That same year, 1989, when The Blues Brothers was still my absolute favourite movie, I decided to do something at The Student’s Revue. I wanted to lip-sync to a song from the soundtrack, dressed in full Blues Brothers costume.

I persuaded a lad in my year called Stefan, who also loved the film, and my best mate Spooner to team up with me for the performance. Stefan and I were Jake and Elwood and Spooner put on a hippie wig and “played” the guitar. There are so many great songs on that soundtrack – Gimme Some Lovin’, Everybody Needs Somebody To Love, Sweet Home Chicago – but to this day I still don’t know what we were thinking when we chose the song we did – the Theme from Rawhide. We got polite applause at the end from the kids and sympathy clap from the teachers.

We also did some comedy sketches which, looking back, were far better than my passion project. For example, here’s the script for one:

[A knocking comes from off stage, left]

[A man (Stefan) is sitting at a desk with a chair opposite him. On the desk is a large sign saying “BANK MANAGER”.]

[CUSTOMER Picks up the empty chair and walks off stage right]

Now THAT made the kids laugh.

By the time the Student’s Revue had taken place I had received some fantastic news from a “contact” in John Menzies (Nicola from school, who worked there on Saturdays). The Blues Brothers was set to be released on home VHS in just a couple of months away. I cycled up to town and pre-booked myself a copy. The exact date was 20th February – a Thursday. I would have to wait until after school to get it. Not a problem. When the day rolled around I cycled back up to town.

You’ll have gathered from this story that I did a LOT of cycling as a teenager. Town was a couple of miles away and while I wasn’t averse to walking there with chums, my trusty mountain bike was by far the easiest way for me to get there quickly. I had rigged up a harness on the handlebars to hold my Walkman in place so I could listen to music on the move and turn the tape over or reach the controls without having to stop the bike. It was a great setup.

So after school that Thursday I cycled to Menzies, The Blues Brothers soundtrack on my Walkman. I locked my bike up outside and ran in, excitedly. It hadn’t turned up.

This was TERRIBLE news!

I had friends coming round that night to watch it. I had to ask them to meet me at Anne’s Videos so we could choose something else instead. Largely prompted by the semi-naked lady on the box, we chose Witchcraft. It was rubbish. That didn’t stop us hiring Witchcraft II: The Temptress when it came out a year later.

It didn’t come in for another three days. To an impatient 15-year-old with £12.99 burning a hole in my pocket, that was an awfully long time. But save my money I did, and get my film, I also finally did. And of course, I watched it multiple times.

I was in 4th-year Secondary at the time – that’s Year 9 to the whippersnappers and, as it was the year before I sat my GCSEs, I was studying to take my mock exams (not sure if schools still do these, but back then, a year before your final exams, one used to sit the exams from the year before as a practice and a measure of how well you were doing). One of the courses I was taking was Art and I had to put an exhibition together from my Art mock. I decided on a portrait of…

The Blues Brothers. I did it from this VHS cover.

I sketched up the image in a light pencil but coloured it in charcoal. It was good. Really good. I don’t know what happened to my portfolio, but regrettably, I don’t have it anymore, otherwise, I’d share it here right now.

Soon after that, another film – which I’ll talk about next year when we do The Ultimate 90s Movie Challenge (#90sMC) – took my fancy and The Blue Brothers kind of dropped from my favour for a while. But every time I watch it, I am reminded why I enjoy it so much. I laugh at all the same jokes, sing along to all the same songs, quote all the same lines. It’s just so much fun and I’d urge anyone who hasn’t seen it to seek it out. Yes it’s unrealistic, yes it’s silly, yes the scene in which the brothers drive their car, full speed, at a protesting group of white supremacists is a lot more on-the-nose these days that it was 40 years ago – but it’s still a whole lot of fun.

By the way, since you ask (Nobody did, Ed.) my art teacher, Mr Chambers thought my work was good but felt that I ought to move away from pop-culture inspired artwork for my final GCSE the next year – a plea I failed to listen to, and which led to a story I’ll share next week…

Join us next week for a bug hunt, the likes of which you have never seen the likes of which. Well, unless you’re a fan of a certain xenomorph-infested thriller from 1986. Yes, Paul will be mostly taking us back to LV-426 to revisit another of his absolute favourites. 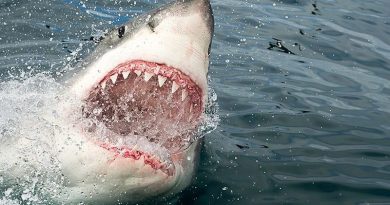