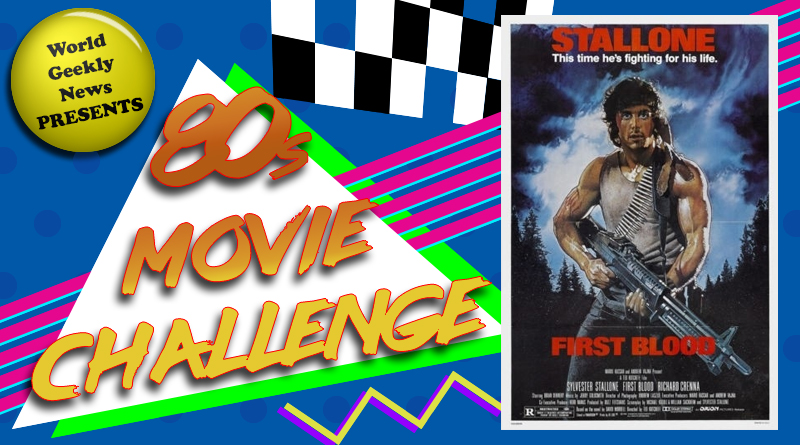 Welome back to #80sMC. After last week’s jungle shenanigans with Arnie in Predator, we hop over to the 80s’ other big muscle-bound box-office draw, as Paul takes a look at a film that, thanks to its increasingly over-the-top sequels, is possibly not quite the movie you expect it to be.

What do they have in common?

That’s right! Things we remember they said – but they didn’t as is actually the case – are all subjects of The Mandela Effect – a psychological phenomenon where half-truths and misconceptions enter the collective psyche as absolute fact. People can remember the Monopoly man having a monocle, Pikachu’s tail with its black end, the hyphen in Kit-Kat, the cornucopia in the Fruit of the Loom logo, both C3PO’s legs being gold.

OK, now that you’re back from checking those examples (told you), that brings us to this week’s film, and its oft (mis) quoted anti-hero, John Rambo. If you’re a similar age to me, you probably played Rambo in the playground, or out down the street with your friends after school. You might have made the machine gun noises, put your belt over your shoulder and pretended it was a bandolier full of bullets, tied your school tie around your head, and of course, shouted his famous war-cry! And, aside from that last thing, you’d be spot on. But the thing is John Rambo, in all five films of the franchise, never once says “Don’t push me.”

We meet John, seven years after returning home from Vietnam, as he wanders into the suburbs of a small Washington town to visit a friend from his unit, only to find that he has succumbed to the effects of the dreadful chemical weapons used in that conflict. Cue sad music and an Incredible Hulk style hitch-hiking sequence as he ambles into the centre of town to get some food and move on. Enter Sheriff Will Teasle. Just look at his desk…

Teasle, you see, doesn’t like the look (or smell) of John, and rather than let him eat and move on, wants him out of the town as soon as possible, so drives him to the city limits, and warns him to stay away. What’s interesting about the conflict that this pivotal scene sets up is, firstly, neither character is entirely in the right or the wrong. Yes, Teasle judges Rambo by his appearance and lets his prejudice drive his actions, but Rambo himself could have hitch-hiked to the next town instead of expressly disobeying Teasle’s warning. Second, and potentially far more interesting, is what we see in Teasle’s office. Let’s look at that picture again. Check out that table just behind him, just next to the eagle carving…

Those medals are the Silver Star, the Purple Heart, and the Army Distinguished Service Cross – honours often awarded to veterans of another military conflict – the Korean War. In David Morrell’s original 1972 novel Teasle is repeatedly reminded that Rambo is a decorated veteran – a war hero with the highest award given to US soldiers, the Medal of Honor. And he resents the fact that this seemingly homeless drifter, a nobody, has received greater recognition than he ever did. I think that still comes across in the film, although Teasle’s history is only ever hinted at, rather than fully fleshed out. It certainly does explain how he’s more than able to hold his own against Rambo in the final act of the film.

Speaking of things left out from the novel, the ending in the film is quite different. Instead of a friendly face sent to talk him down, the Colonel Trautman of the book, while still Rambo’s mentor, is a ruthless hunter whose job was to eliminate the problem. Director Ted Kotcheff’s original three-hour cut of the film even included the book’s ending. Stallone and his agent hated that cut of the film and tried to buy the prints to stop it getting a release. Despite failing at that, they had enough clout to cut the film down to a much leaner 92 minutes.

I became aware of Rambo partly thanks to the popularity of the 1985 sequel, but also largely due to the massive pop culture exposure that came with it. Although I hadn’t seen First Blood when I first saw Gremlins, I was fully aware of what Gizmo was doing when he strapped a red band around his head and picked up a bow and arrow. Calling someone Rambo was like calling them macho and reckless. It’s a comparison used in Spaceballs and Die Hard to name a few. Yep, I knew all about him, despite never having seen any of the films or the ill-advised 1986 spin-off cartoon Rambo: Force of Freedom.

In a few of these look backs, I’ve spoken about my good friend Mez who introduced me to many films which I now love. Although we didn’t watch Frist Blood together, he did recommend Rambo III to me, so we hired it and watched it in my bedroom. This would have been around early 1989, when it came out on VHS in the UK. As a 14-year-old (who really shouldn’t have been watching 18 certificate films, but was), I loved the gung-ho silliness of it. Therefore I wasn’t at all prepared for First Blood when my dad taped it off the TV and we watched it together. Gone were the rippling, sweaty muscles, the catchphrases, the ridiculous over the top explosions and shoot outs, the humungous body count, and instead I got a relatively slow-paced, taut and thoughtful thriller. I wouldn’t say I disliked it, but it certainly wasn’t as thrilling as part III.

However, that was the teenage me. As an adult, there are a number of things that make First Blood not only my favourite, but also the most realistic chapter of the franchise. Firstly, Rambo himself, while not exactly a weakling, is not the pumped-up balloon animal parody of himself he would become in later films. When he’s in his civilian clothes, he looks just like any normal guy. Secondly, although Trautman does build him up as this superhuman weapon, I’m sure a lot of that is hyperbole to persuade Teasle to back down. Rambo does get hurt – quite badly in places. In fact, the scene where he jumps from the cliffside into the canopy of trees was partly performed by Stallone himself – the part where he falls through the last few laters of branches at least. During that stunt, Stallone broke a rib, and the shot in which he was injured is the one used in the film. The pain on his face in that scene is not acting!

During the motorcycle chase, where Rambo wears nothing on his top aside from a wet vest, filming had to be repeatedly stopped as the moisture in Stallone’s eyeballs was beginning to freeze over. Given that the film was shot in Coquihalla Canyon Provincial Park, in Canada in the Winter of 1981, it’s a wonder he didn’t freeze to death! During the forest hunt section of the film Rambo finds a dirty old piece of cloth with which to cover his upper-half. This canvas really was a rag found on the forest floor by the crew during filming. Stallone became so attached to that piece of canvas, his only source of warmth during long segments of filming, that he took it home with him and reportedly still counts it among his most treasured possessions to this day!

Perhaps the most extraordinary thing of all about First Blood is the body count. I included this film in our Ten Unstoppable One Person Armies piece in our launch week a couple of years ago, and in that article, I also touched upon the body count. You see, for all his 500 plus kills over the five movies, First Blood only accounts for one of those. That’s right. ONE! And the most surprising thing of all is that that single death is not carried out by Rambo, but a tragic accident largely caused by the victim himself, Deputy Galt.

Rambo still earned that One Man Army title though because, while he didn’t kill anyone, he could have ended so many more. What he does do with is guerilla training is to disable and distract those who would do him harm. On many occasions, he has the opportunity to take out his pursuers but, while we’re led to believe that he’s being guided by some kind of PTSD induced feral rampage, he does deliberately built his booby traps to wound, and he does pull his punches and stop himself from striking the killing blow. Rambo is not the machine Teasle and even Trautman seem to suggest he is, and this is no more clear than the devastating finale, after Teasle has been disabled.

The tension between Teasle and Rambo is the core relationship of this movie, and it’s the butting heads of two different kinds of machismo which lead to the central conflict of the movie. Rambo, obviously, is the physically superior of the two, but Teasle has the law and, supposedly justice on his side. The fascinating thing is that while on the surface one would think we’re clearly meant to root for Rambo and boo Teasle, it’s much more complicated than that (I mentioned earlier that neither is right or wrong). Rambo is not the traditional hero here. Trautman says it himself – Rambo is the victim. And while Teasle does let his ego get the better of him, and fails to keep his officers under control, exacerbating things, Rambo cannot be completely excused for the many assaults, not to mention the vast amount of property damage he perpetrates. What we have here is a battle of wills between two flawed anti-heroes. Both Rambo and Teasle reach a point – around the same time as the film enters its final act – where they both realise they have done terrible things, but it is too late for them to back down.

Brian Dennehy’s subtle performance stops Teasle from becoming a pantomime villain, imbuing him with a degree of pathos which almost gets the audience to sympathise with him. He is outshone though by Stallone. His performance in those closing minutes as Rambo breaks down, letting out all the bottled up hurt from years of receiving abuse from anti-war protestors, learning the news of his friend’s death and his brutal treatment by the police at the start of the film, is as good as anything he’s done before or since. And, my friends, is what makes is such an interesting watch as well as bringing me back to my opening thoughts. Rambo never says “Don’t push me.” As he is being driven out of town by Teasle in the opening act, he simply asks “Why are you pushing me?”. To which Teasle replies “First of all, l ask the questions here, OK? And second: we don’t want people like you here in our town.”

Yes, First Blood is still a bombastic adventure with explosions, car chases, gun-fights, derring-do and fisticuffs but it’s a much more civilised, intelligent action thriller than a lot of other 80s action fare.

Join us next week for more #80sMC fun. While the world is saying #StaySafeStayHome, Paul looks at the adventures a little fellow who, despite coming in peace, pretty much took over the world in 1982 – and whose message was #PhoneHome. That’s right, it’s E.T. 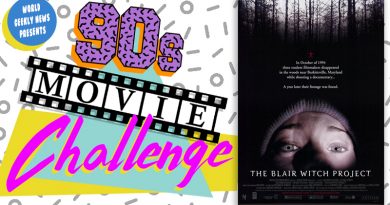 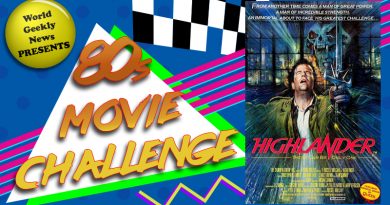 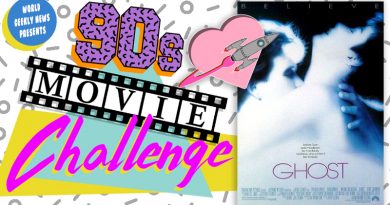