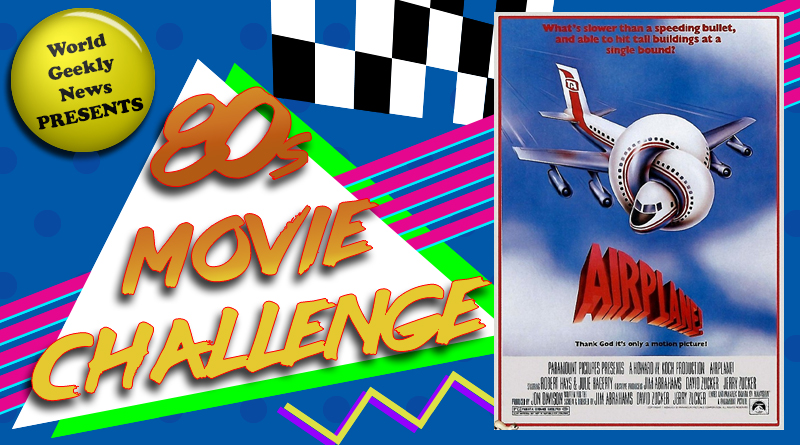 We’re back for more #80sMC fun! Last week’s film, Heathers, proved to be quite a different watch to when it first came out, and we continue that this week as Rebecca looks at a comedy which, in 1980, was fairly near the knuckle, but in 2020 could be considered far more controversial…

Surely we can’t be serious…?

Yes, you can call me Shirley, and yes, some films start slowly. It was 5 and a half minutes in before Stryker let me know that this wasn’t strictly serious, by swearing straight to the camera. Ted Stryker – not the pilot from Zero Hour (1957) – is a taxi driver and he has a passenger, but that’s not important now. He loves Elaine, dammit, and there’s nothing keeping him off that fateful Airplane! other than his passenger. Who happens to be the Author of the most hated tax reform in Californian history, but that’s not important either. What is important is whether you had chicken or fish for dinner – because one of them was poisoned!

As a young watcher, it wasn’t immediately obvious that this wasn’t just a boring adult movie – and the abortion joke* flew directly over my head, but I started to notice that things weren’t quite as they seemed. The bouncing heart at 6:30 made me look sideways at what was REALLY happening.

As an adult, you can read the script to Zero Hour – and notice that the dialogue is almost exactly the same, and the actors play it straight-faced. Ted and Elaine are really in love, Steve McCroskey really has to break that dangerous habit and Doctor Rumack is the only real Doctor on the doomed flight. In the original script, little Joey is Ted Striker’s son. He’s invited up to the cockpit and given a plane to play with. And there’s nothing wrong with that.*

Of course, there is Johnny. Johnny knows that things are crazy, but he lives in crazy. Imagine Deadpool before Deadpool, and without the other stuff like swords and guns.(Sad Fact: Johnny Henshaw-Jacobs (Stephen Stucker) died shortly after Airplane 2 was finished from complications brought on by AIDS, one of the first actors to admit he had the disease).

As the characters walk in, the differences between the seventies and now leap to the surface, smoking is as ubiquitous as Starbucks would come to be, swapping one drug for the other. Like Ghostbusters, there are hints of other famous characters who appear for a payoff joke. The whole thing is set-up to be a series of running jokes – held together by characters completely unaware of what’s happening – and like a good comedy, they come thick and fast.

Not all are verbal either – the jet plane’s sound is that of a prop-engine, the translations (including the infamous Jive) are just slightly off, and everything is just slightly wrong. The beach that Elaine and Ted lie on is missing the Statue of Liberty’s head for a start (both were shot in exactly the same place).

Airplane!’s purest comedy moments come from the actors accepting that this is a normal movie, and not to pay attention to anything that happens in the background. It’s that child part of your mind that looks past the boring adult stuff and makes bunny rabbit ears above the people talking seriously.

This was the first of the movies that took the Kentucky Fried formula and gave it a plot. The UK had already seen this strange amalgam of surreal ideas & mocking imitation in the Pythons (& The Goons before it), but this was taking the ideas of MAD magazine and bringing them to the screen.  This was the birthplace of “Naked Gun”, “Hot Shots” & “Police Squad”.

References to Ethel Merman and From Here to Eternity may no longer be obvious, but there’s enough context to know they’re still funny.

Throughout it all, Airplane! manages to make jokes without being overtly offensive…

Oh… wait… hold up… looks like I picked the wrong week to start defending blackface.

Yeah, there’s some definite misses, and strays into open stereotyping – usually with who is sitting next to Ted.  Still, the odd offence aside, it joins an alumnus of films in the National Film Registry as Culturally Important, and one of the funniest films of all time IMHO. Which proves that taking a well-loved script and altering it slightly is a sure-fire way to make a hit movie (You know which film this is from and which one it copies. Don’t deny it!).

The final line (below) reminds you that you also forgot about Ted’s taxi passenger I mentioned at the start. And that’s still a better pay off than a shawarma party.

(Elaine went on to voice Carol, Lois’s Sister in Family Guy, Ted went on to voice the animated version of Iron Man, and Enrico Palazza was last seen tackling Queen Elizabeth at a baseball game)

Airplane was a PG – Now deservedly a 15 – Shaky, dated but still hilarious. Book your ticket now.

†Apart from Meet The Spartans [12] (2008), which made very similar jokes to all those mentioned. Tell me, Joey, do you like films about gladiators?

Join us again next week for more high-flying 80s fun when Paul Childs has an urge… an urge to go quite fast. Yes – it’s 1986’s Top Gun! 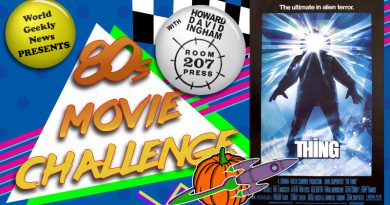 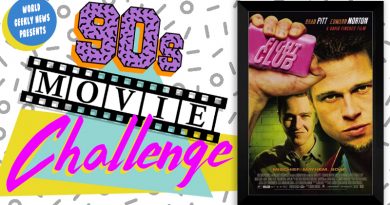 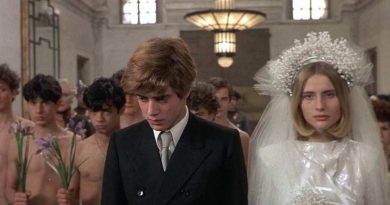