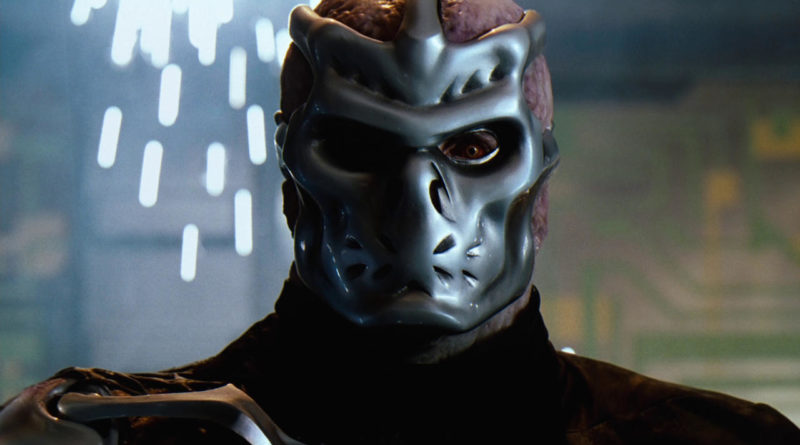 There’s a particularly apt line of dialogue, in the first twenty-five minutes of the movie, that goes like this:

“Unfortunately some people who were too smart for their own good… felt that a creature that couldn’t be killed was too valuable to file away. In the end, it always comes down to money.”

I’m left wondering whether the screenwriter possessed any prophetic or psychic abilities, because that is a staggeringly ironic line, considering the premise of this movie is quite literally “Jason Voorhees kills more teens and twenty-somethings… but in space.”

Possibly-unintentional-delicious-meta-commentary aside, Jason X is laughably terrible. There’s nothing scary or even mildly unnerving about Jason himself anymore: all his mystique and physically intimidating presence washed away by sequel after woeful sequel. It doesn’t help that the movie looks like it was made with loose change a studio executive found down the back of the sofa, instead of an actually-fairly-respectable $14 million. The effects on show are remarkably dodgy, even for an early ’00s movie where throwing as much cheaply done CGI at the screen as possible was the norm. I know $14 million isn’t a huge amount, but I can’t help but think “This movie came out the same year as The Mummy Returns, which featured one of the most unconvincing CG creatures of all time, yet this somehow looks even worse”.

As for the plot… there isn’t much. Jason – along with your typical slasher movie Final Girl – is cryogenically frozen, and accidentally thawed out in the 25th century by a crew of disposable idiots, who of course stow Jason on their ship. What could possibly go wrong with that? (Though, to be fair, the ship does serve as a decent tunnel to point Jason down and say “Go murderise those midriff-baring young people.”) If Jason is at all disconcerted with his new futuristic surroundings, he doesn’t show it. In fact, I think he’s pretty content offing everything in sight, like a happy little robot whose only function is “stab”.

In fact, let’s talk about all the death in this movie, because there’s a lot of it. Most of the killings are fairly standard and involve Jason stabbing or mangling people in various ways. But there’s one that I particularly like, and it’s the first proper death after Jason is un-popsicled. Picture this: Jason sits up. Jason acquires his target: a poor, unfortunate blonde woman. Jason shoves her head in liquid nitrogen, then shatters it on a counter surface. Which, while a pretty inventive kill for slasher aficionados, is also hilarious. Why? Because it directly implies that, although Jason now finds himself suddenly in the 25th century, he somehow knows where the liquid nitrogen is, what it does, and how to use it. On a spaceship. In the future.

Unfortunately, the movie is fairly rote after that apart from a couple of standout moments, such as Jason throwing a guy (I can’t remember anyone’s character names, but are you really gonna blame me for that?) onto a comically oversized drill spike, and watching his hapless body rotate around the corkscrew blades until he reaches the bottom. There’s also a fantastic line where another soon-to-be-murder-victim says “It’s okay, guys! He just wanted his machete back!”, which is honestly so dumb I can’t help but love it. But moments like that are unfortunately few and far between, and sitting through the middle two-thirds of the movie is an exercise in boredom: Jason kills someone, surviving characters run away to safety, a disaster occurs on the ship, rinse and repeat.

Except, one glorious moment near the end of the movie makes the entire mess worth watching, in my opinion. To try and distract Jason, one character creates a simulation of Crystal Lake around him, complete with two “teen” girls who, naturally, provide the nudity quota for the movie, because nothing distracts a slasher movie monster like the possibility of sex-prevention-murder. I’m not kidding either, the simulated girls tempt Jason with beer, then pot, then finally: premarital sex. They explicitly point this out, as well; one of them literally says to Jason, “We love premarital sex!” Which has a fascinating implication: the character running the simulation is genre-savvy. He knows how Jason operates and figures the best way to distract him is with boobs. The thing is, it works.

In what is by far the most hilarious moment of the movie, Jason watches the two girls climb into sleeping bags. Then, we cut away to another brief scene. When we cut back, Jason is beating the girls to death using one of them as a sleeping-bagged mace. It made me laugh so hard I scared my cat. Like I said above, it’s worth watching the entire movie just for this scene. I promise it’s worth it.

As for the rest of the movie? Terrible. But do I regret my time watching it? Not in the slightest. In fact, I’m even going to recommend it. Grab yourself some friends, and maybe a few (okay, a lot of) beers, and go nuts on this early ’00s gem of terrible ridiculousness.