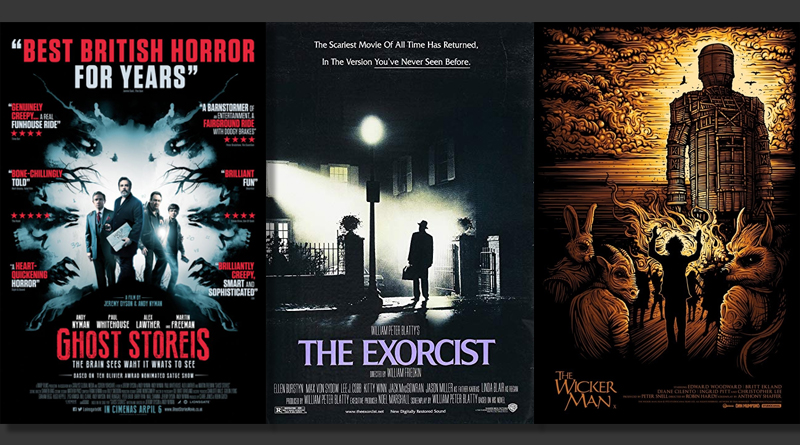 The most recent film on my list, and the only 2018 release (yes, I know it says 2017 but it spent some time on the film festival scene last winter before seeing a general release in April). I wanted to see this at the cinema but time restrictions prevented that, so had to settle for the Blu-Ray at home instead.

I was out in town with my brother at the time of the cinema release and I remember seeing a poster for the film on the side of a bus: “GHOST STOREIS” it proclaimed in huge bold letters.

“What the hell? There’s a poster maker whose job is in trouble!” I said.

“Interesting,” said my brother, “because you know that the tagline is ‘The Brain Sees What It Wants To See’ right? I never even spotted that!” Nor did my wife.

So turns out that was deliberate and most people hadn’t noticed – despite what was right in front of their noses, because they expected to see Ghost Stories, Ghost Stories is what they saw and the brain filled in the blanks.

And that pretty much sums up the film for me – if you go in expecting ghost stories then you get three really quite creepy (and in one instance, also very funny) ghost stories. I won’t ruin the ending, but as you can imagine, there is more to this film than first meets the eye. Frank Ilfamn’s score adds an epic touch to proceedings, but it’s the extended moments of silence while really give the film an eerie quality. You expect shrieking strings at certain poins so their absence is really quite jarring.

Scary, funny, thought-provoking and also an engaging, mind-bending mystery which I would compare with, for example, Sleuth or Shutter Island.

What else is there to say about this film that hasn’t been said before? It’s a true masterpiece of the genre and of cinema in general. Everything is impeccable and the film is near perfection in what it aims to do.

There’s always been the stigma that the film is surrounded by evil and this has kind of overshadowed the film itself. It’s sad really as the film is a remarkable achievement in both tone and atmosphere. The lurking dread is everywhere, in everything and in everyone. There is no relief from the evil presence that has been meticulously slipped into the creation of the film. Every character is battling their own demons much as Regan is battling hers (although hers is literal). It’s a fascinating character study.

There are so many moments that will linger in your mind after viewing the film and many that have been talked about for decades such as the infamous head spin or the stair spider walk and these scenes do look great. The effects are great and the acting really does make it work in a believable way.

While a lot will remember these iconic scenes with special effects and full demonic possession, it’s the quieter moments which really show the craft of director William Friedkin. These lulls don’t offer relief so much in they give us a brief second to think and take in what we’ve just seen. The terror is still there just not being forced down our throats. These moments also draw us back to reality and make us question faith and belief. For me, the most powerful image is the one that made the poster, that of father Merrin standing beneath the streetlight. All around him darkness apart from the lamp above him. He himself a dark silhouette also. It just echoes the theme of darkness being in everyone.

I think it’s pretty clear to say I love this film and I would recommend all those who haven’t to give it a shot.

Our resident YouTuber is sharing his thoughts via a video every day. Read his review of The Folk Horror classic, The Wicker Man, or watch the video below: