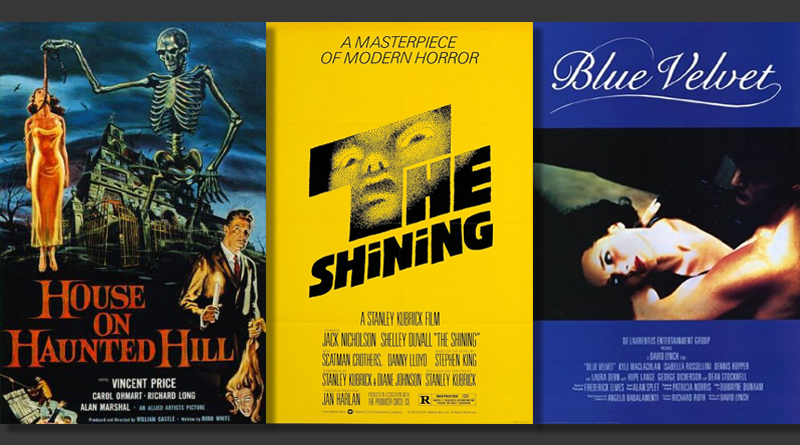 A candy-coloured clown they call the Sandman
Tiptoes to my room every night
Just to sprinkle stardust and to whisper
“Go to sleep. Everything is all right.”

Easier said than done. Of the films I’ve watched already, this month Ghost Stories was the creepiest, The Wolfman the goriest and Arcadia made me worry most about the future but the prize for the scariest monster so far goes to David Lynch’s offering. As Lynch films go, Blue Velvet is a fairly normal mystery thriller, sharing a lot in common with Rear Window, Fargo and, of all films, Fright Night. The narrative structure is not disjointed like, say Eraserhead, Fire Walk With Me or Mulholland Drive and unlike those films, there’s not a lot of extraneous, disturbing imagery. No, the disturbing imagery is all extremely salient to the plot.

Dennis Hopper’s Frank Booth is, quite frankly, insane and all the more terrifying for it. That a human being, quite a diminutive one at that, can do some of the atrocious things he does is something that will play on my mind long after I’ve forgotten about Phibes, Pipes or Jack Torrance. And that’s Roy Orbison’s In Dreams ruined for me for life. It’s used not once but twice to incredibly disquieting effect. That a fairly inconsequential kidnap-gone-wrong can also be one of the most memorable is a testament to Lynch’s storytelling and keen visual eye. The imagery in the opening shots of the film where it is established that we are in smalltown America where nothing bad ever happens is striking. Its blues skies, bright flowers and friendly fireman reminded me of the opening paragraphs of Shirley Jackson’s The Lottery which also started with a nice day before taking a profoundly disturbing turn.

For the Lynch fan, there’s a lot to see here: Booth seems to share similarities with Twin Peaks‘ The Man From Another Place; Kyle McLachlan lays down the foundation he’d later build on as Agent Cooper, portraying Jeffery as, at first, innocent, then morally ambiguous, flawed then heroic. Laura Dern who appeared as Dianne in Twin Peaks as well as starring in Lynch’s 1991 film Wild At Heart serves as the catalyst for the terrible events here; there are the red curtains which would play such a large part in creating the look of Twin Peaks. Colour is as important in this film and gives hints as to characterisation.

Blue Velvet is a good film – I wouldn’t say enjoyable because of the quite grim events unfolding (including several instances of violence against women) – I would go as far as say it’s an important film. But it’s also deeply disturbing – as horror films go, it has definitely done its job.

Based on the Stephen King novel if the same name, Stanley Kubrick’s adaptation is a phenomenally deep and dark journey into madness of isolation and into the darkness that’s inside people.

My preferred version of the film is the US extended version which I feel is the more complete version as it includes some sub-stories which echo deeply in theme through the film creating an even deeper and more powerful experience. One of these is Jack’s alcoholism. It’s shown in the normal version of the film, but in the extended cut we get a lot more about his anger when drinking and the violence both Danny and Wendy experience as a result both physically and emotionally. As the film progresses Danny’s naivety to it all lessons and he learns what his father does to him is wrong.

I will get my one negative out of the way. Shelley Duvall. Her acting is beyond terrible, to the point of almost destroying the film. She seems to have one acting style in the movie and that is to just look scared. Nothing more. On the flipside, it highlights just how phenomenal Jack Nicholson is in the film. He shows madness building in Jack’s head, letting small bits out until the final breakdown. It’s a ground-breaking performance and probably my second favourite after his performance in Chinatown.

The flow of the story is great with a brilliant evolution of the characters. Jack slowly goes mad, while Danny accepts his father’s mistakes and evolves from being a victim. Many criticised the fact it was very different from the source book but I feel it is a much tighter and well-written story with the changes. It doesn’t focus on violence and gore. It’s a character piece in which we watch the de-evolution of the human mind through solitude and addiction.

The direction and filmmaking on show is perfection in every way. It looks beautiful and flows so incredibly well. I can’t imagine the film working any better then it does (other than recasting Shelley Duvall). The iconic scenes which many will know really are great and are right to be remembered especially Jack’s final breakdown with the axe.

The Shining is one of those films I feel everyone needs to watch at least once as it is a masterpiece in cinema and is near faultless.

Our resident YouTuber looks at a film which has nothing to do with the show currently enjoying success on Netflix, or the novel upon which that was based, despite sharing a similar name. Check out his video review:

The Trailer Park: The Old Man & The Gun

One thought on “31 Days Of Horror Movie Challenge: Day 22”