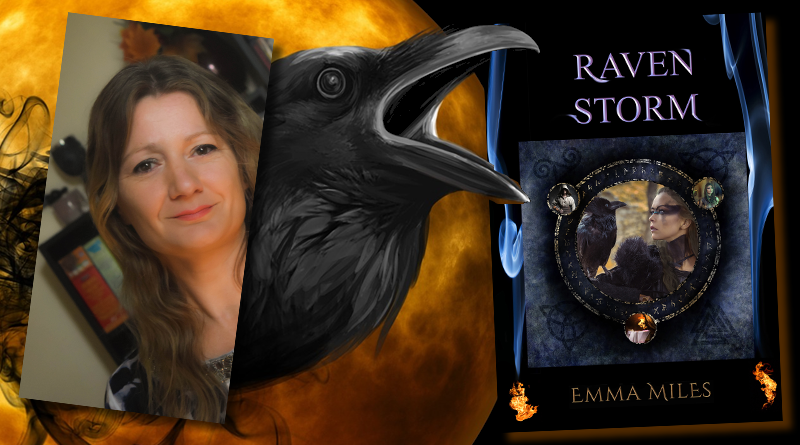 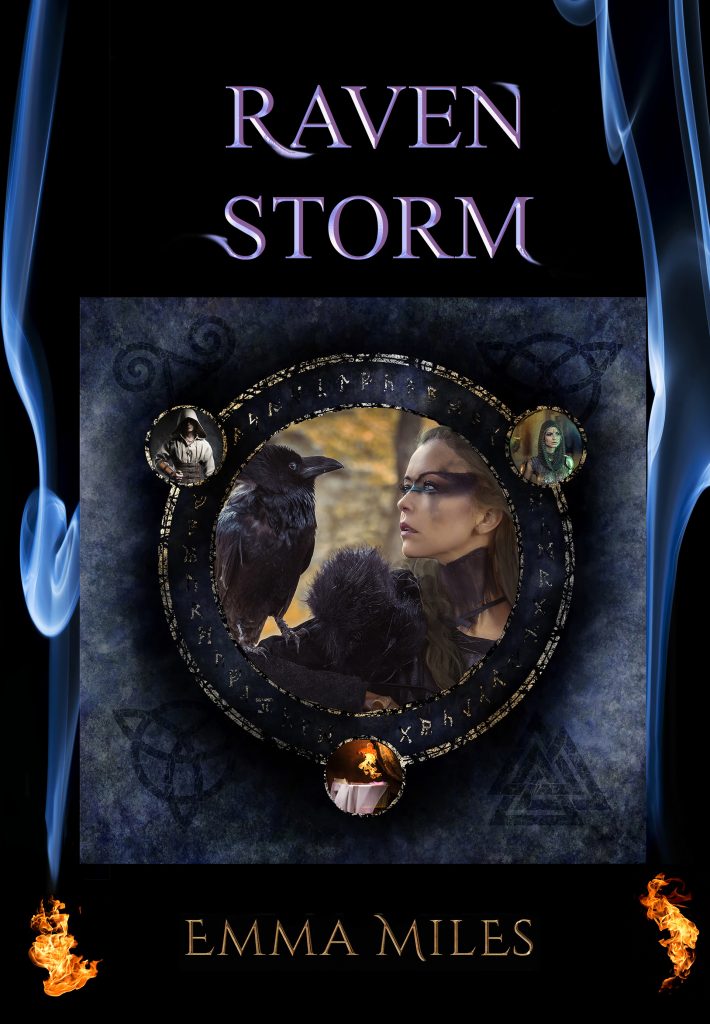 Fear walks with those in power. Divided, the land of Chem hangs in the balance. In the west the Ravens seek to bring safety to women, and an end to slavery. In the east the remaining covens cling to their power, refusing to give up their way of life to foreign invaders. Across both lands the priests whisper and plot, their gods a shadowy threat hanging over them all.

​To protect their young family, Kesta and Jorrun have made their home in the Raven Tower of Elden. Unable to abandon their responsibility or friends, they remain embroiled in the fight to the north. Whilst peace and friendship blossom between the Fulmers, Borrows and Elden, the arrival of strangers turns the court of Taurmaline upside down.

The history of the Fire-walkers is about to catch up with them, and the Fire-spirit’s truth will be revealed.

In May 2019 I had the pleasure of reviewing Emma Miles’ Raven Coven, the second instalment of her Fire-Walker quartet. Raven Storm picks up approximately six years after Raven Coven ends, dropping us back into the lives of Kesta and Jorrun, who have spent a comparatively quiet few years beginning a family, consolidating their hold on Chem while encouraging its emancipation from slavery, and growing ever more into their marriage partnership.

This instalment places great weight on family and the ties that bind us. On love, and how it pulls us in so many directions, not certain if the steps we are taken are the correct ones. It also gives a light into the magical beginnings of the Fire Walkers and their descendants, with the introduction of the people of Geladan making a seemingly peaceful trade mission to Elden and insinuating themselves into the court there.

The book tackles large themes, including slavery, oppression, the battle to free a nation that may not fully wish to be free. The spectre of fanatical religion hangs heavy over the book, both in Chem, and in its threat to the Fire Walkers and their children. Blind belief has a lot to answer for.

If I’m honest, I missed Osun, the damaged hero from the first and second books. Flawed and hindered by a shameful past. His interactions with freed slave Cassien in book 2 were interesting, and shone a light into the master/slave relationship from both sides, with both having much to lose. The combined might of characters in Raven Storm was impressively drawn, within a convincing magical framework, but the element of suspense was a little lacking. I never felt that the principal actors in the book were really in grave danger, though more incidental ones were scattered to the winds, facing horrific injuries and death.

I suspect the flawed hero was supposed to be Catya, with scope for her redemptive arc to be picked up in book 4. Unfortunately, I found Catya a total brat, and any time spent in company with her festering resentment niggles like a stone in a boot. You want to shake it out and leave it by the wayside. Osun was a product of his society. Catya is fundamentally self-absorbed and annoying. Her relationship with Cassien reduced him from a nuanced character to a lovesick puppy.

There’s a lot of travel in the book, crisscrossing the seas with magic in the sails. The bard Temerran’s involvement was developed well, and he is an interesting, crunchy character. Given how much time the book devoted to events in Chem, it did feel like the final push towards emancipation there was somewhat hurried in its depiction.

Overall, Raven Storm is a solid addition to the series, upping the stakes for Kesta and Jorrun at a very personal level, with the existence of the Fire Walkers – and their children – very much at stake. It is very good at showing that societal change can progress very slowly when tackling the mindset of indoctrinated millenniums, and how love ultimately drives us on.

Many thanks to Emma Miles for the ARC of Raven Storm. 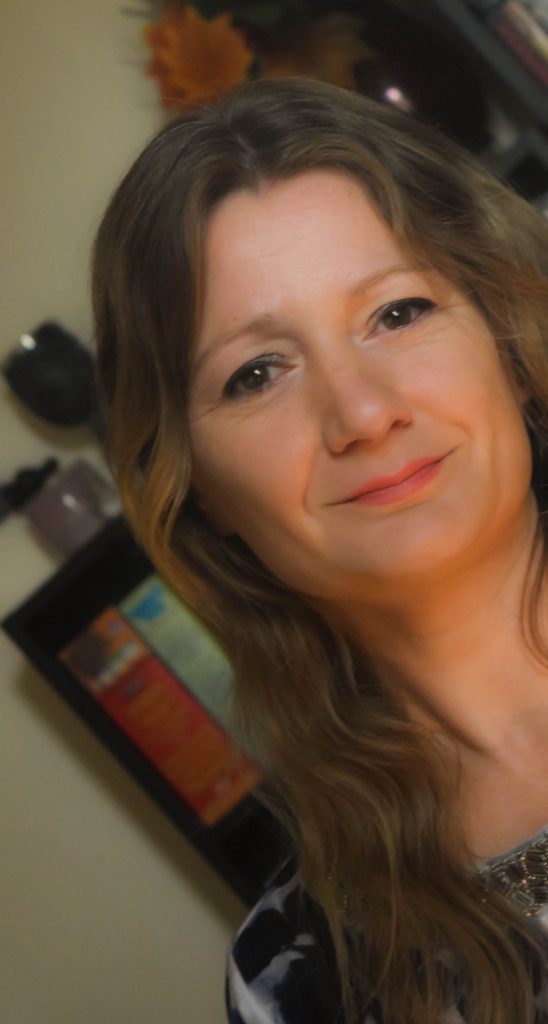 I often get asked when I knew I was a writer; the answer is always. A writer is what I am, it’s in my soul. There have been times in my life when I couldn’t write, and times when my writing has been the only thing that kept me going. I think I always longed for something deeper from life, something more meaningful, and I found it in my imagination and in the music of words.

It was poetry which first caught my attention, and whilst my younger cousins called for ghost stories it was animals I first wrote of. I think I gravitated toward fantasy because of the freedom it gives, I could create my own worlds and decide my own rules. My Wind’s Children trilogy was born from an image that came to me whilst daydreaming, of a young man sitting alone below a bridge. I didn’t know who he was; it turns out neither did he, but we found out together.

I’m now working on my seventh book and love writing more than ever, it’s an addiction, an obsession, but one I now share with my wonderful writing family. I write as much as I can around work, but I also try to squeeze in a ridiculous amount of hobbies! I’m a wildlife photographer and do a little archery. I paint, sculpt with clay, withies and driftwood, preferring to be outdoors if I can. I still have a love for the theatre, having started out in life studying backstage crafts, and a great love for language. I speak a little French, Romanian and Italian, ma non molto bene! 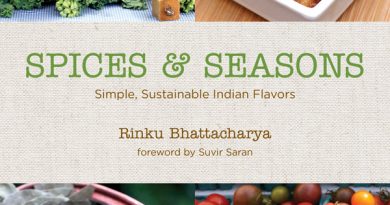 Spices and Seasons – An Indian Cookbook For Beginners and Experts Alike 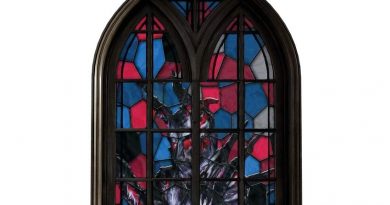 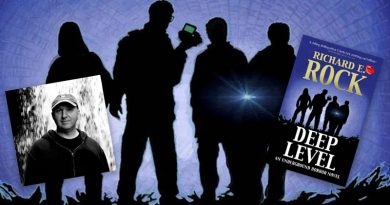